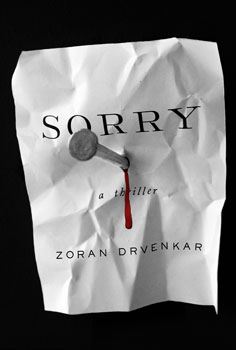 Like many recent thrillers, Sorry weaves a lurid tale of multigenerational pedophilia and consequences that include two grotesque murders. But Croatian-born, German-raised Zoran Drvenkar braids themes of familial dysfunction and universal guilt with postmodern strategies that subvert generic conventions to shape a powerful existential thriller. His novel impels readers forward as it forces them to reread.

First, Sorry masterfully manipulates the linear chronology common to most murder mysteries. Opening “In Between,” its eight sections all begin with “After,” followed by “Before.” Only part 8 follows its “Before” with a final “After.” Readers must therefore work harder than usual to comprehend the sequence of events.

Next, while standard thrillers often contain multiple points of view, here central perspectives belong to characters with veiled identities. The novel does boast four named protagonists: two brothers, Kris and Wolf; two female friends, Tamara and Frauke. Close in high school, dreaming of the future, ten years later they have drifted into quiet despair. An omniscient narrator introduces each, and develops them in individual sections bearing their names.

But in each “After,” an unknown “I” acts upon an unknown “he,” their identities clarified only in the section preceding the final “Before.” The interlinked antagonists, meanwhile, remain shrouded in mystery. “In Between’s” introduction of “You” may cue astute readers to include themselves. But details quickly point elsewhere, to one who can only be identified as clues develop. Later in the novel, the omniscient narrator enters “You’s” narrative to introduce two young boys, labeled Butch and Sundance, whose gruesome history lies at the core of Sorry’s chilling labyrinth. Their identities, too, remain hidden till nearly the end. We also meet “the Man Who Wasn’t There,” although he clearly was. To solve and understand the murders, we must unravel these obscured identities.

The plot tracks its lost protagonists, whose experiences in Germany’s hard economic times lead them to create an agency, Sorry, which apologizes for those who harbor guilt, whether bosses or lovers. As technology enables speedy contacts with faceless clients, Sorry thrives until one client ensnares the friends in murder. Thereafter, the forward—backward chronology follows their efforts to disentangle themselves.

Indeed, Sorry’s motto, “We know what you should say; we say what you want to hear,” includes not only potential clients but the reader—and the protagonists themselves, who can only “know” what their motto’s “you’s” need if they, too, bear guilt. And they do regret their errors and misdeeds; as “You” correctly observes, “You have an agency that apologizes, but there’s lots that you can’t forgive yourselves.”

Exhausting but exhilarating, for those who play its complex game, Sorry rewards with more than thrills. Facing an antagonist who holds him responsible for the murders, Wolf says, “I’m innocent. We’re all innocent.” But when asked if he feels guilt, he replies, “Yes.” And when in the final “After,” one of the “innocents” has killed to protect the others, the circle completes itself, evoking Dostoevsky’s Underground Man and Camus’s Jean-Baptiste Clamence, who sought to flee their guilt by reminding us of ours.