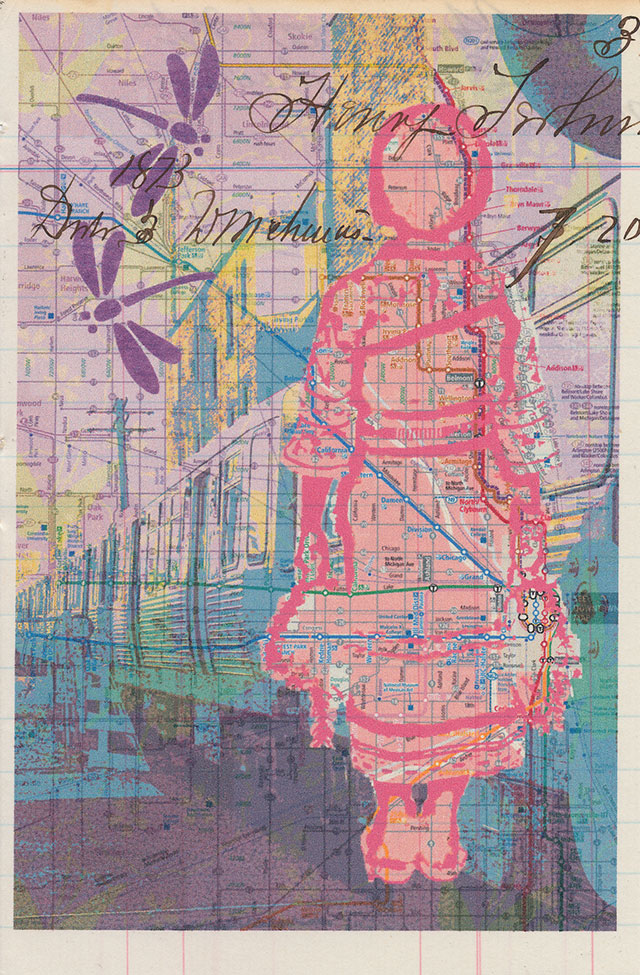 Debra Yepa-Pappan (Jemez Pueblo / Korean), There and Back Again (2012), digital image printed on antique ledger paper, 4 x 6 in / Courtesy of the artist

The day of my mother’s funeral service I separated myself from the rest of the grieving throng and hid out in the musician’s belfry like tortured Quasimodo, my grief too hideous to expose.

I peered down upon the mourners below, watched my aunts struggling with folding a star quilt, trying to contain it within the casket. The lid wouldn’t close. The white pastor believed my mother’s quilt was some sort of ancient Lakota ritual. He announced it with gravity and a sense of suspicious distance.

Native flute music floated out from the speakers as my aunties struggled to close the lid, both furtively cramming the ends of the quilt into the casket, tucking my mother inside. One of them gestured exasperatingly to the other, and then they both started to laugh.

Months before her death, my mother made me promise that we’d bury her in her royal-blue pantsuit, her favorite color. She forced her jewelry on me, take this, and this . . . here, take this . . .

It is both touching and morbid to accept a dying woman’s most personal belongings: her favorite silver and turquoise earrings, the onyx bracelet, the Black Hills gold rings.

She even gave me her little silver buffalo pendant. I wore it to a grade-school presentation, and one of the children raised her hand and asked, “Is that a pig?”

The crucial difference between having children vs having pets is that when your sister’s cat gets run over by a car, you can say things like, “she never was very bright.”

In death, my uncle’s eyes resembled harsh-colored yolks. To this very day, I regret that I didn’t gently press my fingertips over his eyelids to close them, like drawing blinds to shut out the glare of a harsh afternoon sun.

“Wakes lasted for days,” my mother says. “We’d get bored waiting around while the old people sat huddled over like crows. Sometimes, we’d tell the younger kids that the hosts needed to use the outhouse for extra storage until it was time for whoever it was that died to get buried. We’d tell the kids that it was a multiple fatality car accident, lots of parts that needed storing. Those kids refused to use the outhouse, after that.”

On the day my mother received her confirmed test results, we stopped off at a restaurant for lunch. The waitress complimented my mother on her earrings. My mother laughed. “You want them? I won’t be needing them.”

Grandma Iron Thunder’s service was held on a scorching day in the middle of August on the Dakota Plains. There was nothing but gold-colored scrub grass and blinding sky for miles in every direction. Her casket was draped with a red quilt featuring the famous silhouette The End of the Trail stitched in black cloth. My mother clucked, “I hate that quilt, good thing they’re burying it.”

Following the fire and brimstone of my mother’s memorial service, I winded my way down the spiral staircase from the musician’s belfry, and a church lady I’d never met before congratulated me on my beautiful singing. “You have such a beautiful voice!” she cooed. I thanked her, taking the credit, even though I had not been singing at all.

On November 22, 1963, at the doctor’s office, my mother and her husband received news that he had six months to live. Immediately following the short walk to their car, Frank switched on the radio and they listened briefly to the story about the assassination of President Kennedy. Then they switched off the radio and started driving back home to spend time with their new baby daughter.

My grandma Wing’s funeral was held in the old church and cemetery at Fort Peck. She requested everyone wear white. She was ninety-eight. The service was dignified and affecting, replete with a mix of traditional singers and Christian. As the service was finishing up and people were paying their respects, a melee had erupted outside. A dozen or more cousins jumped Rachel’s baby-daddy and beat him to a pulp. All those white shirts, and all of those white pants, stained with blood and dirt. Someone said, “Clyde’s Last Stand.” The men all laughed.

During a trip to Mexico, my sister tattooed my mother’s name, Alita Rose, surrounded by roses onto her ankle. A few years later, following the death of my father, I considered getting a tattoo in tribute to him also, but Melton Lester didn’t have the same cachet.

When my mother’s respirator was finally removed, and as we watched the monitors slowly wind down . . . and when I finally left the hospital, a three-year-old girl refused to let me pass her until I acknowledged her ecstatic announcement: We. Just. Had. A. Baby.

The Lakota unburdened themselves of hair, of fingers, cut into their flesh to temporarily escape the grief of a loved one’s death. I saw this on A Man Called Horse, and in Dances with Wolves. But as far as I knew, no one in my immediate family had ever done this. My mother was worth far more than a hank of hair. She was worth my spine. My eyes. My womb.

“I want my remains spread at Disneyland,” my mother says. “But I don’t want to be cremated. Just leave my parts.”

“You can bury my heart at Chuck E. Cheese’s.”

“Bury my heart at Sea World.”

“I will fight no more about putting the toothpaste cap on, forever.”

We were two Indian women, laughing until our bellies ached, spitting death right in the eye. 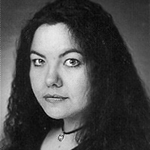 Tiffany Midge (Hunkpapa Lakota) is a poetry editor for The Rumpus and a humor columnist for Indian Country Media Network. Her poetry collection The Woman Who Married a Bear (University of New Mexico Press, 2016) won the Kenyon Review Earthworks Indigenous Poetry Prize and a Western Heritage Award. Midge’s work has appeared in McSweeney’s, The Butter, Waxwing, Moss, Okey-Pankey, Mud City, Apex, The Rumpus, and World Literature Today and has been widely anthologized.