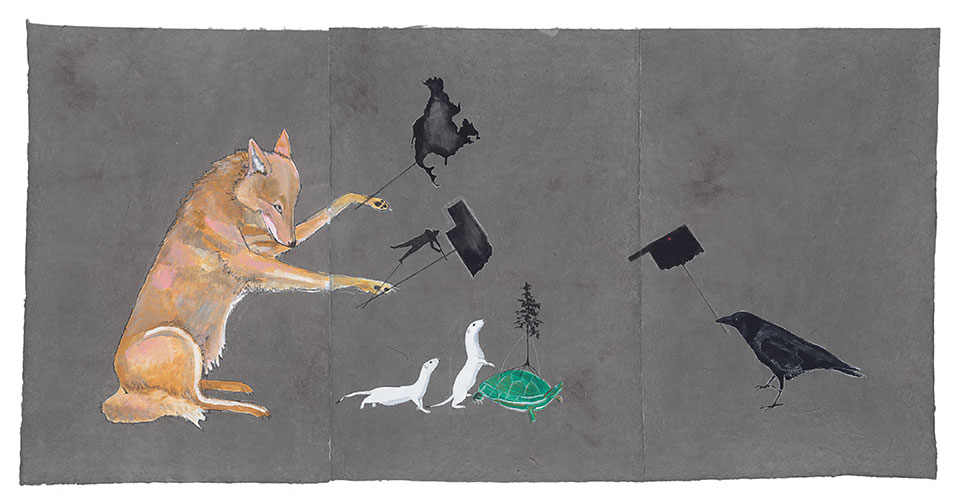 The author considers how animals make their way in the modern world and where they live in memory.

I’m driving with my husband through eastern Oregon on our way to the nuclear test site in Nevada. The Crooked River Canyon is semi-arid: it gets about nine inches of rain a year. Farmers irrigate a band on either side of the river for cattle. It’s fall, and the air is pungent with juniper. A coyote trots in lush grass, its coat a mix of brown and tan darker than I’m used to. I call out in surprise, and my husband slows the truck.

The animal pauses to look back at me from a ribbon of grass, the gray sagebrush beyond. I’m relieved that we’ve seen it, rather than a local rancher. I don’t mention coyotes I see at home on Puget Island, because Dave and his family have a wariness left over from the years when they had cattle. My husband remembers when there were no coyotes on the island. Maybe the Cathlamet Channel filled in enough for them to swim or walk over on a low tide, maybe they smelled Fred Stanley’s sheep, but I hear them calling some evenings. I’ve stood on the long driveway to our nephew’s house, seen the tick in his eye, a slight nod when he hears about a coyote over by the field of cottonwood on Cross Dike that Dave saw, no matter how quiet I was.

On one of the Osage cultural walks—the year a cold wind tore across the prairie and blew an arbor away, when Anita with her very-black hair and sly smile, who taught finger weaving, was still alive—I remember flinty Osage men in desert camo talking about hunting coyote. It was October, and they said they’d been out all morning. I didn’t hear how many they got. These hunters were the new chief’s advisers, and there was a meanness about them.

I remember an old photograph I’d seen of a wagon in New Mexico in the 1920s, maybe, piled six feet high with the carcasses of cougars, the big heavy cats. Our nephew is not an angry man, but he is a hunter. I’m an urban person, whose Osage father was too tenderhearted to hunt, but I have friends who hunt for food, and I eat meat. I found my uncle in a long narrow photo of Osage wolfhound hunters hanging in the Boy Scout Museum in Pawhuska. He was standing in khaki pants and shirt, with his arm resting on a cocked hip, a little behind the line of men and trucks and packs of dogs. It was an all-night production to hunt coyote. Uncle Morton was my favorite of six uncles and three aunts. The oldest, he was the only one who stayed to ranch. He was depressive, and I loved his dark brown eyes.

The Wah Zha Zhi hunted cougar, buffalo, and elk in a progression of tests. City people go out to the desert in eastern Oregon to hunt coyote for sport. The rabbit population surges, horses step in their burrows and break their legs. At the Nevada National Security Site, as it’s now called, jackrabbits cross pavement between structures curled by atomic blasts, and near Pyramid Lake a wave of rabbits crosses the road in our headlights.

I have a clipping, a photo of a coyote that climbed into a Max-train near the Portland Airport and rode downtown. The animal is curled on a plastic bench in an empty car: its ears up, eyes open. An officer lassoed it, the caption says, releasing it elsewhere. I may have made up the ending. I admire the species for its smarts, adaptability, for surviving. As a child, I watched Wile E. Coyote and the Road Runner. Slapstick, boing, explosions, beating up, tormenting, beep beep. I didn’t laugh, but the soundtrack is still there. 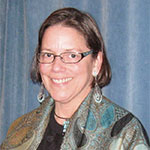 Ruby Hansen Murray (enrolled Osage) is a writer and photographer living in the lower Columbia River estuary. Her work appears in Yellow Medicine Review, Apogee, About Place Journal, and Indian Country Today. She is a Hedgebrook and VONA fellow who studied at the Institute of American Indian Arts and Warren Wilson College.