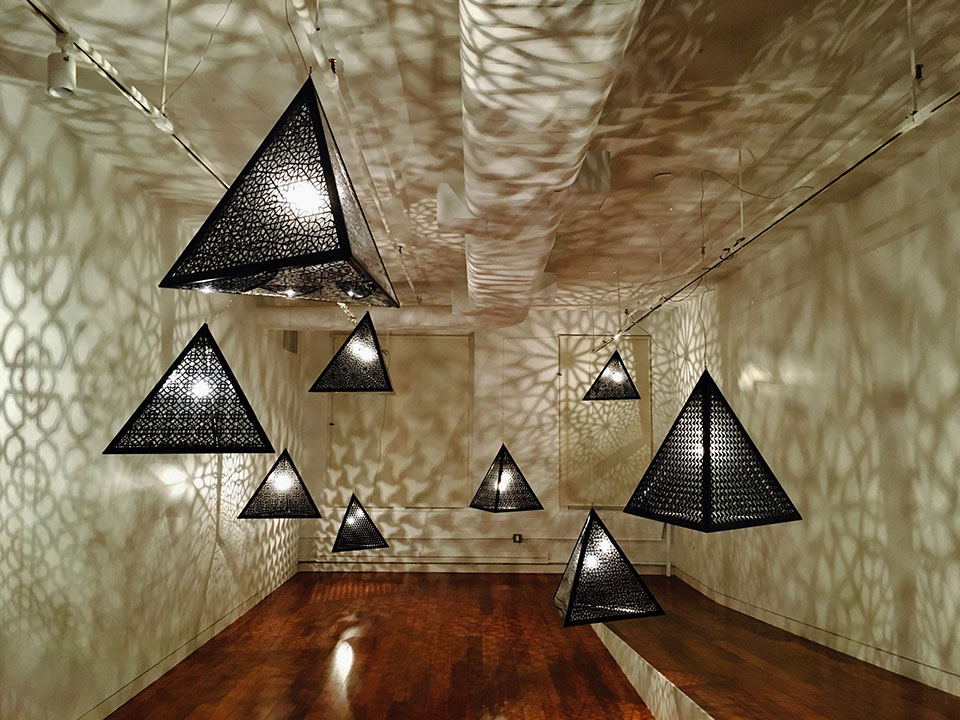 Qasida of the Bridge of Teacups

The soul cleaves into two somewhere along the birth canal,
didn’t you say, Plato? I send your echo back to Athens
from my rug of locked antlers in Peshawar
where I fill a teacup with the question of half my soul
(as I watercolor a whitewashed village I’ve yet to see). In
the torpor of the mango season, I am closer to the heady basil
that fishermen of the Black Sea put in their boats for luck –
Will I know my soul by the musk of tannin ink, sugarcane
pulp, sweat of a calligrapher’s palm? The antlers are fading. From teacups
of clay, bison bone, crystal, bamboo, I build a bridge to the other half.

Qasida of Tea, the Daughter of Remorse

Sit, I am your powdered throne, so says dust,
let my busy worm-teeth suture
your folly, let remorse float in your bowl
as a tea leaf, let it dissolve your delusions. Hear
the wood-fire-crackle of stubborn bones under
the golden whisper of tea? The emperor,
an outcast, bows to his only brother – the bowl,
drinking water bewitched by jasmine:
a slow brew coloring realization
a hint from the wind to the outcast’s hill

Qasida of the Fifty-foot Tea Bush

The poet’s divan, his only piece of furniture,
pushed against the ecstasy of the window,
bears the weight of his longing
for the beloved to appear.
Ah Fanny! Even a tea bush in Assam
knows his secret, has shot up to a bewildering height
throwing a gentle shade over the flame of his odes
as he fires and turns the urn
of his consumption for a scene that will last longer than him:
a yes, a dotted porcelain cup, a wild tea blush.

The composer will stab his own song in the eye
because the audience is hungry for a Red Mass
because his pale laundress is not a muse but a bell
tied to the public’s toe. Pierrot Lunaire, the lunatic
in the black coat, locked in a libretto, carries moonlight
like a lamb on his back, spins all he wants against the cello,
against madness, whistling as he stops a moonbeam
with a chair, adds tea to the Turkish tobacco scene, adds milk,
throws a tantrum onstage against white gloves and lipstick,
stirs in wild honey, flips the moon to its mystic side.

The artist’s soul is an embarrassment, plays hide and seek
among the emperor’s rhino horns, corals, pearls, lions.
He paints exile as an old woman: gray hair endless
like the smoke rising after a Mongol invasion, on her palm,
a single red feather. He has gambled away chalcedony
and jade for more feathers. He ends up painting her wingless
but every day she gains height as she sings,
drawing fresh water from the well, lantern in hand,
drying tea leaves in the delicate moonlight. Tomorrow
she will make tea and return with ribbons of another tomorrow.

Qasida of the Last Chai

My Himalayan salt has a sadness hard to lift,
chimerical joy in beads of sweat on my forehead
when you play Khusrau’s sitar. Our hair is combed back
and knotted, covered with Dhaka muslin.
We must be our mothers in our laugh, shaking out arrows
that pierced us on the map. But we don’t laugh
because someone handed us separate keys and your door
became an unnamable distance. Our last chai has our salt,
our silica, our duet of Malhaar against the blind new borders. 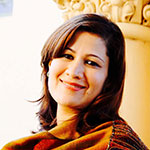 Shadab Zeest Hashmi, author of Kohl and Chalk and Baker of Tarifa, is the recipient of the San Diego Book Award, the Nazim Hikmet Prize, and multiple Pushcart nominations. She has been published in Prairie Schooner, Poetry International, Asymptote, and other journals worldwide. Her work has been translated into Spanish and Urdu.