Exiles of Eden by Ladan Osman 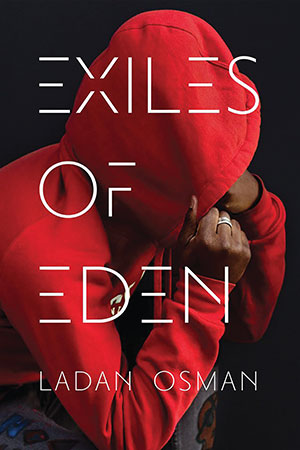 Who is allowed to call themself an American? When a crowd of thousands of white faces shout for an approving President Trump to “Send her back!” in reference to Representative Ilhan Omar, a black Muslim woman, a former refugee, an American, it is a racist threat that lays bare the critical question of our current moment. As Representative Omar defends herself on the political stage, another Somali American, poet Ladan Osman, uses her new poetry collection, Exiles of Eden, to conduct an emotional autopsy of the loss of home and the destructive force of America’s racism. In poems that move easily from the formal to experimental, Osman’s bold new work journeys through worlds that shift unpredictably from intimacy into violence, worlds forever lost to her and, finally, to the world the poet would create to supplant them all.

A question posed by Osman’s mother opens the collection—“How long will you live this half life?”—and acts as guide throughout the book. The poem’s ghazal form is soon fragmented and deftly reshaped by Osman so as to mimic the kind of fracturing of mind and self she audits with the poem. “I try to remember half-lives, learned in science rooms, / air dense with iron, vinegar. The process of dating old bones, / old stones. Unstable nuclei, decay by two or more processes. / Exponential death, exponential halving of a life.” Hers is a scientific examination of what it means to be slowly broken by loss and foretells the personal exhuming done throughout this stellar collection.

Elsewhere in the book, Osman uses poetry to perform the shattering that unpredictable violence engenders. “NSFW” begins with humor and intimacy: “I want us to get off before this screen sleeps. I want to make a video / and play it on a loop, let it ruin someone’s dinner.” But then the tone of the poem shifts, plunging the reader into the dis-ease that invades even this private moment. “I want to tell you I had a nightmare about Oscar Grant’s murder / before it happened. I want you to believe me and turn me over / and over. Say: This hole? This one? / Cover them all. Fill my mouth so I stop tasting blood.” In the tenth year since Oscar Grant’s murder and the fifth year since Eric Garner’s, Osman’s work on the pervasive violence black Americans face remains urgently, maddeningly necessary.

The poet’s work enacts the wandering of an exile but moves beyond the boundaries of language by incorporating photographs, most arrestingly in “Practice with Yearning Theorem: Loci.” As the poem journeys to sites of US violence, an aerial Google Map’s images of “a Catholic church damaged to grain” in Mogadishu, Osman’s birthplace, for instance, is inserted between stanzas to solicit questions language cannot hold. Is Osman the watcher or the watched? The bomber or the bombed? The poem concludes, “I sunder in a different language . . .It’s true / I’m an alien here. // I used to say ‘after all’ and mean ‘at the end,’ or ‘finally.’ / After all, America has broken my heart. This English is sufficient.” Osman stretches beyond the inadequacies of language and embeds loss of the life she left behind, and the duality the United States affords her, where she has made a life but is forever seen as foreign.

In the final poem, “Refusing Eurydice,” the poet both invites and commands her fellows to “Go to the place between dreams, where all the light is yours.” Repetition, found throughout the collection, here demands to be read aloud. “This is a congregation refusing Eurydice,” Osman writes. “We refuse death by discourse. / We refuse death by exile . . . We are looking for a better myth. / We’ve only been looking since Eve.” By rejecting the given narratives, rewriting as far back as the beginning, Osman’s final poem generates a new gravity and invites us to take part in a powerful rite that makes whole what the world has shattered. The collection is about a life examined, a life broken apart by circumstance and named, piece by messy piece with poetry and image. And in this political moment charged with so much frustration and sorrow, Exiles of Eden offers the triumph we all need.