If only I were the rubbing of shoulders in crowded places,
the sympathetic applause,
the neck that turns to change the view and move a life.
If only I were the enthusiastic care-free chatter
of people coming out of a movie theater.
If only I had the contentment of floor tiles with contiguity
or the look that does not know what it sees now
that it has completely lost its connection to the eye.
If only I were a blind thread guided forward by the needle.

One of My Brothers

One of my brothers likes collecting tools and scraps:
screwdrivers
clutches
bolts
nuts
and nails that are like vertical glances.
He collects them all, telling himself:
ruin is possible at any moment.

How you grew from page to page
in the family album
crying under the gaze of the mother
hidden somewhere outside the frame.
Naïve among sisters,
chubby among classmates,
and while everyone else stood up,
early you discovered convincing reasons to remain seated.
With your eyes widened by the outside,
you began to look for ways to escape this body.
In the album that abbreviates a life in thirty pages,
only calls of distress loom vague and mute
from one photograph and the other.
The viewer fails to imagine an appropriate voice for every photo. 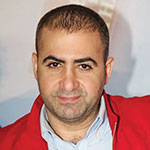 Nazem Elsayed is a Lebanese prose poet born in 1975. He has published four collections of poetry, and his work is included in several anthologies. He is one of the thirty-nine Arab writers under forty selected for the UNESCO-sponsored anthology Beirut 39. He is currently based in the Washington, DC, area 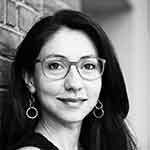 Huda Fakhreddine is an assistant professor of Arabic literature at the University of Pennsylvania. She is the author of Metapoesis in the Arabic Tradition (2015) and co-translator of Lighthouse for the Drowning (2017).