Ghosts in the White House Given the years of apprenticeship that most professional writers put in, it is not surprising that notable persons in sports, politics, and other fields rarely have the time or ability to be competent authors as well. Yet a celebrated name on a book jacket has been one of the primary ways to attract readers since ancient times. Modern scholars can never really know why some ancient scribbler might want his hard work attributed to Aristotle or someone else, but in many cases they are certain that Aristotle never wrote it. We know the score, however. Follow the money. A book by an author of considerable talent but no renown will simply not sell as well as a book with a famous name on the jacket. An old joke in publishing is that “J. K. Rowling” or “Stephen King” on the cover could make the Manhattan phone directory a best-seller. On the other hand, most holders of famous names can’t write well enough and require the services of a discreet pro.

In the romantic view of writing, in which the writer suffers in a quest for her soul, this seems a bit immoral, taking credit for work you haven’t really done, but the practice is more common than you might think. Calvin Trillin once remarked that he had barely gotten used to doing interviews with “authors” who hadn’t written their own works when he—on air, midinterview—realized he was interviewing a man who hadn’t read his own book.

I have occasionally thrown the sheet over myself and played ghost. A very well-known creative person (motion pictures, television) had an interesting idea for a novel, I was told, and had put a writer on the job who did a poor job, which was then poorly redone by another. The famous man got me on the phone and asked me, “Can you fix it, kid?” The fact that I had not yet seen a page of the manuscript tells you much about how all this works. Plucky Jim promised he would namelessly do his best. I scrapped the original drafts and was pretty happy with the finished result. It was published, translated into Italian, and I got paid. Some weeks later, the famous man was on Fresh Air, promoting the novel. After all his other creative achievements, Terry Gross asked, how did it feel to publish his first novel? “It was hard work,” he said without hesitation.

In the romantic view of writing, in which the writer suffers in a quest for her soul, this seems a bit immoral, taking credit for work you haven’t really done, but the practice is more common than you might think.

I doubt he got writer’s cramp from composing my check—not enough zeros. But at least he was content to leave me to my work. I got nowhere trying to work with a celebrated crime expert who fought for every ill-phrased, inexplicable wording he had presumably dictated while stuck in a traffic jam on the LA Freeway. His book did eventually come out, though I suspect not even his mother read it.

As I write this column, the surprise thriller of the year seems to be The President Is Missing by former president Bill Clinton and James Patterson. Clinton has long been a fan of mystery fiction, and when he was in office, the reading of a special note of appreciation from the White House was a highlight of the annual Mystery Writers of America’s awards banquet. Asked about his favorite thrillers by the New York Times, Clinton had a long list of the usual suspects, including Lee Child, David Baldacci, Jacqueline Winspear, Lisa Scottoline, James Lee Burke, Walter Mosley, Louise Penny, Sara Paretsky, and others, adding, “I also look for writers whose works are not that well known yet, like David Pepper. And I sure miss Sue Grafton.” (Grafton passed away last December.)

Of course he also mentioned his co-author, Patterson, who, after a long string of best-sellers, set up a novel shop to cobble together a variety of fictions under his guidance and imprimatur, including children’s books. This is, strangely, not a peculiar practice either. After a few Horatio Alger knockoffs, Edward Stratemeyer set up a similar “factory” in the early twentieth century, eventually employing writers and editors to work from his outlines, creating such series as the Rover Boys, Bobbsey Twins, Tom Swift, the Hardy Boys, and Nancy Drew. Stratemeyer did not use his own name but is credited with over 1,300 novels selling 500 million copies. 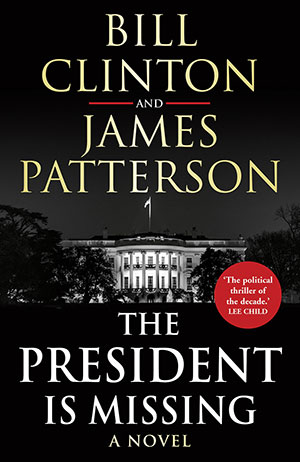 It’s hard to know how much each author contributed to The President Is Missing. Did Patterson outline a plot and Clinton supply presidential insight? Did Clinton have an exciting plot idea and Patterson kneaded it into shape? The surprise with the Clinton/Patterson thriller is that most reviewers—expecting a major dud—found the book at least yeomanlike, and many critics wrote positive reviews. The New Yorker critic joked that whatever quality the book had must have come from the ex-president, since Clinton can write and Patterson can’t. Personally, I felt sorry for Patterson in the media interviews, awkwardly sitting beside Clinton while the ex-president fielded questions about Monica Lewinsky, but I’m sure Patterson’s attitude was buoyed by the thought of all those presidents marching into his bank account.

Abraham Lincoln was a fan of Poe’s detective stories. Taft grudgingly admitted liking a “good” mystery. Woodrow Wilson and Herbert Hoover were mystery fans as well, but none of these avid readers put their pens to the deductive arts. Franklin Delano Roosevelt was an enthusiast of the mystery, and his presidential library contains such books as a Charlie Chan novel, The Thin Man, works by S. S. Van Dine, and currently obscure writers such as Kurt Steel, Francis Durham Grierson, and Alexander Williams, author of Murder in the WPA (1937). Though he never took credit for writing a mystery, FDR presented a puzzle to Liberty magazine editor and writer Fulton Oursler, who gathered half a dozen popular writers (including S. S. Van Dine) to write successive chapters of The President’s Mystery Plot. Serialized in 1935, it was published as a book in 1936 and, with a script by Nathanael West and Lester Cole, released as a motion picture that same year. A later full solution to the mystery was engineered by Perry Mason creator Erle Stanley Gardner in 1967.

According to his nephew, Stona Fitch (aka novelist Rory Flynn), Harrington was an old-fashioned, hard-drinking, knock-out-pages kind of novelist who oversexualized everything and could ruin any family dinner. 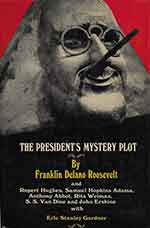 Though he led a very active life, Elliott Roosevelt presumably had more time than his father for less pressing activities, and in 1984 at age seventy-four began publishing a mystery series featuring his mother, Eleanor, as the amateur detective. This is particularly amusing since Eleanor was associated with the 1940s song “Pistol Packin’ Mama” when she was urged to carry a firearm by the Secret Service. Murder and the First Lady led to a lengthy series including such titles as Murder in the White House Pantry and Murder in the Rose Garden. In 1990 Elliott died, but this had no effect on the steady stream of his novels, which continued for another decade. The publishers continued with the fiction that Roosevelt had left a number of manuscripts to be published posthumously. In fact, he turned out to be more prolific in death than in life. His series ended in 2001, shortly after the suicide of William Harrington, the prodigious author of dozens of novels, including a series based on the television character Columbo and a Harold Robbins novel or two. According to his nephew, Stona Fitch (aka novelist Rory Flynn), Harrington was an old-fashioned, hard-drinking, knock-out-pages kind of novelist who oversexualized everything and could ruin any family dinner. His novels under his own name received several good reviews, however. He was a practicing attorney before becoming a full-time writer and was also one of the primary developers of Lexis-Nexis.

Harrington also claimed authorship of some of the popular Margaret Truman mysteries, though his agent asserted that Harrington had exaggerated his contributions to other writers and had really acted primarily as a research collaborator. He was quoted in Harrington’s New York Times obituary as saying, “Bill would go out and scout. He would gather information as a researcher on these books. But in all of these cases, none of these people needed a writer.” Oh really? It is hard to imagine what sort of research Margaret Truman would have needed about the White House (her father was the thirty-third president) or other government entities. Harrington’s agent, it should be noted, was also Truman’s agent. From 1980 to 2016, nearly thirty books appeared in the “Capital Crimes” mystery series, with titles such as Murder in the White House, Murder in the Supreme Court, Murder in the CIA, and Murder in Ford’s Theater (ahem!). The most recent of these came out in 2016. As with Elliott Roosevelt, Truman’s publishing outlasted her life, which ended in 2008. The books have a number of different protagonists, and several of my writer friends hold that there are almost as many styles, implying the work of more writers than merely William Harrington. The late Donald Bain (who wrote at least 115 novels, including the Murder She Wrote series) claimed twenty-seven of the Truman novels, which wouldn’t leave as many opportunities for others as my friends see.

I find it odd that publishers took until 2006 to cook up Truman’s Murder at the Opera. After all, Margaret Truman debuted on radio in 1947 as a classical soprano, and her career in show biz carried on to acting on radio and television. She was notorious, however, for a bad review she received from Washington Post music critic Paul Hume. She was attractive, he wrote, but couldn’t sing very well, was flat a lot of the time, and had no professional finish. President Truman then wrote to Hume: “Someday I hope to meet you. When that happens you’ll need a new nose, a lot of beefsteak for black eyes, and perhaps a supporter below!” It naturally caused a kerfuffle of the sort we now endure seemingly every morning. Fortunately Paul Hume was unharmed and outlived Harry Truman. Imagine the conspiracy theory that could have been inspired by the critic’s murder! Whom can we hire to write it for us?