At the beginning of June, I interviewed Márcia Wayna Kambeba. Since the United Nations declared 2019 the Year of Indigenous Languages, we started there. Her language, of the Omágua/Kambeba people, is part of the Tupi linguistic branch. The interview was conducted in Portuguese. 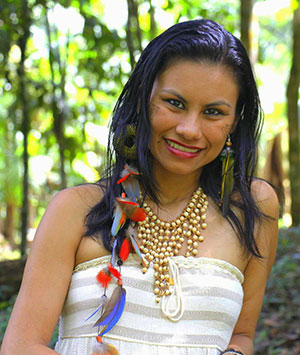 “The maintenance of one’s maternal language is a political strategy,” according to Márcia Kambeba. “Language has been a process of resistance since the colonizers arrived.” She explains that the Portuguese feared not being able to understand what the indigenous people were saying and so forbade them to speak their languages. “They prohibited us from speaking Tupi, Guarani, Arawak. Those who did speak their language could be beaten to death. The Portuguese wanted to show the people that they couldn’t speak their language.”

In response to this interdiction, the peoples spoke to each other late at night, “no ouvido, baixinho”—very quietly, whispering into each other’s ears. Parents murmured in secret into the ears of their children, determined, as Márcia says, that “my language will not die.” She recounts, “And so in the twenty-first century, over hundreds of years, we have managed to maintain our languages, at the cost of a lot of bloodshed.”

Despite this continuity, indigenous languages are still imperiled. “We are losing a lot of languages and cultures. In the process, we lose rituals, we lose identity.” Pressured by social forces such as the invasion of their lands or poisoning of their rivers by wildcat gold miners injecting mercury into the river, some indigenous persons flee to the city, where it can be more difficult to continue their language and culture. She maintains that the celebration of indigenous languages should happen not just one year, but every year.

To support indigenous languages is to erode the stereotype of “the Indian,” a word and category that Kambeba and her fellow indigenous writers vigorously reject.

Without their own language, she says, “my people are left ‘sem memória, sem história’”—without memory, without history. To support indigenous languages is to erode the stereotype of “the Indian,” a word and category that Kambeba and her fellow indigenous writers, such as Daniel Munduruku, vigorously reject. Any approach to indigenous languages must valorize key differences, recognizing distinct ethnicities, “to represent each nation of peoples,” she says. This is an important transmission “to give to children, to give continuity to the next generation.”

Her audience for her performances and writing includes schoolchildren, elders, inmates, drug users, academics, and women’s groups in the Amazon and beyond. In addition to giving poetic presentations at numerous schools, including indigenous schools, where her poetry has been integrated into the curriculum, she teaches university courses in indigenous literature, indigenous territoriality, and indigenous women and resistance.

She crafts her writing so that different indigenous and nonindigenous peoples throughout the Amazon can find their own experience mirrored in it. She purposely chooses subjects—specific plants and fish and trees that are endemic to the Amazon, for example, the pirabutão fish—to which peoples throughout the Amazon will be able to relate. “A Guarani will recognize their experience in my writing.” Through it, “they will feel as one, not separated.” The different nations of indigenous peoples are united, for example, by a sense of “circular time.”

Her aesthetic and cultural approach was inspired by her indigenous readers. At a reading that she gave once, a woman of the Pataxó people approached the author and thumbed through her book. The woman inferred that Márcia was writing only about the Kambeba people’s culture and asked with disappointment why she wasn’t writing about her experience. From that point on, Márcia made a shift in her writing to include elements that would speak to experiences throughout the Amazon, “a language that embraces all of us.”

Kambeba describes a kind of production that goes against the worldview of the majority of multinational and Brazilian companies, which see nature as the source of material products. In contrast, for indigenous peoples, “production comes in another form,” embodied in “values of unity and reciprocity,” and with specific cultural practices “with the maraca instrument, and rituals such as the dance for the dead.” But many villages now experience their territory being invaded by outsiders and swallowed by urban development. In the nearest cities, she says, there are indigenous peoples who were expulsed and “forced to migrate away from nature.” Hundreds of hydropower dams are planned for the Amazon Basin, most without proper consultation of indigenous people; instead, indigenous peoples are seen as “an obstacle” to production.

However, she says, “society learns through us.” She explains that the indigenous peoples’ worldview acts as a counterweight to the disorder and dismay of a society based on material production. But, she says, the environment, or “meio ambiente,” as it is usually rendered in Portuguese, should only be called the “ambiente. Instead of distinct objects—forest, human, bird—our existence is one sole entity, linked in coexistence.”

The poet uses specific Amazonian cultural and biological elements so that her readers can feel that “this Amazonia is living.” She argues that it’s time for a new way of thinking about Amazonia. “It’s not subservient, and it’s not pretty. It’s not the lungs of the planet.”

Kambeba argues that it’s time for a new way of thinking about Amazonia. “It’s not subservient, and it’s not pretty. It’s not the lungs of the planet. And it’s not an infinite place. It’s finite.”

“And it’s not an infinite place. It’s finite. Tudo acaba”—everything is finishing, she says. I’ve heard a similar phrase from Munduruku leader Alessandra Munduruku when speaking of the Amazon and its river systems. As indigenous activists and artists living in Brazil’s Amazon, they have a firsthand view of how destruction is playing out in their communities.

Kambeba points out that the Amazon contributes to a better climate and distributes rain to the whole world through aerial currents. Both outside and inside Brazil, “we need precipitation as well as carbon sequestration,” and so “we need to keep Amazonia standing.” She says that we need to keep Amazonian trees on their feet, “em pé.”

She credits social movements such as the Brazilian indigenous and black rights movements with helping to expand the “lugar de fala,” the space of speech, for nondominant groups. “Lugar de fala” can also indicate the right to inhabit a specific standpoint of speech. Afro-Brazilian writer and theorist Djamila Ribeiro popularized the concept in her book, O Que É o Lugar de Fala?

Indigenous women have also been expanding their leadership. “As recently as the 1970s, women were seen just as procreators.” Now, however, she sees a phase of activism and struggle. Leaders are not only the caciques, the male chiefs; there is a growing number of cacicas, female village chiefs. Although spiritual leaders have traditionally been male pajés, now female shamans are taking up some of those roles. Many indigenous women candidates ran in the 2018 election. From that slate, Joênia Wapichana was elected as the second indigenous deputy in the history of Brazil. In that same election, Sônia Guajajara ran as a vice presidential candidate. Although Guajajara didn’t win, Kambeba feels that she and the other indigenous candidates helped inspire new levels of political and social participation: “Many indigenous women are leaders in education, health, visual art, literature, music, activism.”

“Art is resistance. It spreads the word about the nation.” (By nation, she means her people and their parentes, indigenous “relatives” who might be from a different ethnic group.) And yet Kambeba herself at first felt hesitant to appear on Globo, the main Brazilian media network. What if she fails in some way or is attacked on social media? But she focuses on remembering that when her “face appears on Globo, I have all of my nation behind me.”

Equally important for Kambeba is that, as a result of her visits to schools and universities, she is inspiring a new generation of indigenous students to write.

Equally important for Kambeba is that, as a result of her visits to schools and universities, she is inspiring a new generation of indigenous students to write. “They perceive that in the poem they are valorized. This gives them pride and inspires them to write. I also encourage them to compose, to photograph,” to utilize all the arts. “In the poetry, they feel their identity.”

Kambeba notes that there are numerous small communities throughout the Amazon that are struggling to maintain their forest “on its feet.” Many communities, for example, that have been affected by deforestation as a result of mining, desire to reforest their areas. Kambeba suggests that outsiders—“the big powers” and individuals alike—who wish to help Amazonian communities can identify and support these sorts of community projects.

Editorial note: Kambeba reads the Portuguese/Tupi version of her poem “The Time of Climate” in this web exclusive.