There are cities one won’t see again. – Joseph Brodsky

Only a bearded smile shows below a conical hat
turning men to rice farmers or Wang Lung pulling
a rickshaw except I’m on a bamboo raft
guided by a soundless Charon whose wooden pole
dips into the Qionghai, spiking dead lotus
flowers. Were this pottery from one of those Dynasties,
Ming or Han, there’d be a pagoda, an arching bridge, and us
on a blue and white plate in silk robes, practicing pieties,
forever gazing, as on Keats’s urn, though ravished in dry reeds.

The mountains shy at my early arrival, clouds like tangled
lingerie still skirting their range. Up to ankles
in sedge grass, a discouraged heron gawkily aims
for a higher floor then gives a raspy cluck, declaiming
in bird-speak, “There goes the neighborhood.”
I want to embrace this scene for all its good,
yet how, with you hotel-bound, coughing, bedridden?
The lake’s quiet surface enters my spine; the hidden
marvels suddenly made visible like a torch from a flame.

That stilled fisherman inked to a shadow inhabits
a hanging-scroll I’ve made in my mind,
his back to net and rods, a panel perhaps in classic
script, ideograms spelling out the swiftness of time,
vertically, of course, as he tries to stare
passed weed muck into a future obscured,
as we are, by an understory of shriveled lily pads,
by reflection of an osier’s spilling hair. You’ve had
it with crumpled tissues piling up like drafts.

You’ve had it with traditional healing teas,
cigarette smoke dragoning through walls.
You’ve had it with squatting stalls
but not the hospitality of the Yi,
their rotating trays, lamb’s tongue, hot pots,
beef and bladder, old-style songs, folk
dances, the falsetto notes of the men, the pitch
of cool in poncho-frayed white cloaks,
the ways to say “beautiful” in everyone’s thoughts.

Last night I proclaimed art as a container
for the self on a panel echoing Whitman
then worried I too loudly banged the drum.
Our Chinese friends, tolerant of my campaign
for a spirit radiant as the gold on their flag, clapped
like flickering stars at the end of my speech.
Nothing calmed my fears, not the movie featuring wiretap
surveillance – the feeling of being watched,
the terrors that enter the room while we sleep.

We steel ourselves despite the filigreed
air, sunlight rendering more real the horror,
our cameras pointing to blood gushing like water
in a rural courtyard. Circled around a table,
our senses empty as fast as lacquer goblets fill.
Nearby, behind a cage, preparing himself for the playbill
featuring himself, a pig practices his squealing
last act. New Year’s Day, “Ku Shi” in Yi,
six invisible days but first a slaughter.

In theater seats, in the outdoor air of night,
our eyes focused on a water curtain, a projected eagle
flapping slow-motion: choreographed flames ignite
Heaven’s Fire: The Totem of Life but I find its sequel
later in our room without the flashing lights or fountains
shooting their aquatic cannons. What synchronizes
beneath the sheets like a lunar eclipse, our wish for a Fragrance
of Years behind us, when one partner dies
and the other no longer hears a peacock’s screeching cry.

The Flag of Imagination Furled

Because we held hands I never prophesied
the tenants of cemeteries nor found time
to solve the great riddles in the narrow
corridors of all my cities. What overcame me, all that
running my forefinger down the wintry pages
of my masters and my adversaries, touching
their sentences like sculptured palaces,
touring their villages of ink? I’m sure most of the time,
Nina Simone was there and helped to deepen
the pouches beneath my eyes even in gleeful Madrid,
preaching to a cloistered community of garlic cloves
or spray-painting morning fog, making sure
not to get too dizzy from the lash of geraniums
lest they launch me into a spell of lyric wonder.
Severe sadness? A cocoon of oppression? Nothing accounts
for my frozen laughter in the proud cantinas,
my meticulous lack of holy clamor as I scribbled
toward some infinitude. How often I’ve wanted to
lick my mirrors and pose questions to my footsteps,
of course without the crisis of caves or politicians
eating hungrily from their dark bowls of pocket watches. 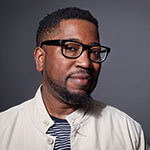 A recipient of a Guggenheim Fellowship, Major Jackson is the author of five books of poetry, most recently The Absurd Man (Norton, 2020). His edited volumes of poetry include Renga for Obama and Best American Poetry 2019. He teaches at Vanderbilt University.