Moored in an estuary of chestnut trees
is the main building – a mother ship.
The sharp-eyed gaze eventually settles,
studying the façade’s roman numerals,
and a window agape on the fourth floor.
What would you see, leaning on that sill?
If you blink; a sea bay, the foot of a mountain.

Boys were trained here once to give orders,
thick combat coats smothered the sound
of heroism cracking in their rib cages, like
the brink of a frozen fountain.
The quick march of the town’s heartbeat
has faltered to a feeble shuffle.
The fountain’s still here, but no training ground,
no whimpering of boys lined up in the fog;
the decades have drained the park to a hush.
Military rigor relieved by the healing routine:
the tight pool-surface relaxes for a crippled limb,
the breath: gasping and irremediable,
a hiss leaking from the mouth cavity
like wind through an avenue.

And a child crouches there among the leaves,
harvesting, as mute as a trail-marking.
If there are too many conkers for two pockets,
each one held is committed to memory,
the shape, the color, the shine, the bruising,
of the person waiting, looking after,
sharing their nature, as they meet,
holding hands, on school trips,
up and down this borderland.

The rain causes me to take shelter in an empty telephone box.
On one side someone’s plastered up the ten commandments,
and an old man loiters inside it from early morning until night.
He sprays aftershave on himself before he steps inside,
as if anyone could smell him on the other end of the line.
I fantasize that he’s continually calling his daughter
because his pension hasn’t come, he can’t pay the bills,
she’s to sort it out now, or come pick him up!
Anyway, tonight it’s me occupying the space,
I flick through the pages of the telephone book,
I’m looking for the most dialed number,
in the morning, when he sees me, he’s surprised that
my daughter hasn’t come,
but he’s glad I’ve learned the method.

Translations from the Hungarian

Renátó Fehér (b. 1989, Szombathely, Hungary) has published two collections of poetry in Hungarian: Garázsmenet (2014) and Holtidény (2018). A defining voice in the new generation, Fehér’s first collection sought out the identity of a country, a family, and a postsocialist Hungarian generation. His latest collection acknowledges the continual presence of past events and asks, Where to next? 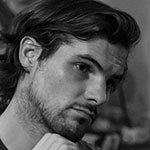 A translator of Hungarian literature, Owen Good (b. 1989) is from the north of Ireland. He now lives in Budapest. His translations of Krisztina Tóth’s and Zsolt Láng’s collections of short stories will be published by Seagull Books in 2019.