Three Poems from the Philippines

If only words dilute sediments at the bottom of my gut; if only a tongue can let this pain hydroplane into a song.

If only I did not get up from the soft eggshell mattress of my old bed; if only I played the lazy student card and stayed behind.

If only they warned us; if only I/they listened.

If only those raindrops were not as fat as freshly fed eels; if only I camped out in school and waited for hot bread.

If only no one died; if only everyone died.

We/you were never the same after the flood; somehow you came out of that dirty dark floodwater with your tummy swelling with survival and your heart still paddling its tiny arms to safety.

The banana tree swayed as you fell from it; nothing new there – you fell from aging mango trees before. Once, you even fell into open sewage in front of a heritage church, then ran into incoming traffic sweating away whatever demon perched on your shoulder. But that day, when you fell, it was a forty degree Celsius afternoon. Even the maya birds stopped singing; the stray dogs curled up under stagnant cars on the street, lazy. You insisted on picking the banana’s heart – a penultimate moment before the large red flower blossoms – so you can serve banana heart salad that night. With your bolo, you climbed the tree and in that climb, the world stopped for you and for me. You fell with your eyes open, dryly staring up at the equator’s sun – this sun we’ve known all our lives – and accepting its betrayal. There will be no banana heart salad tonight, nor will there ever be another forty degree afternoon. I thought about that image of you during that awful winter. As I walked unplowed sidewalks, I could see a banana tree in the near distance and your triumphant grin as you cut away the heart. You drop it on a pile of snow and I pick it up. Dinner’s ready, you say, set the table. Oh, but dad, where is home in all this cold?

from where I am,
El Niño is a god.

when they go out
to play before lunch,
he makes sure they
run back home
before their skins
sizzle, blister and
peel

if in school, they’d
be folding their
Catholic school
sleeves or ripping
open the first
three buttons of
their brown-stained
pleated white shirts

This man moulds their
worlds into pliable
horizons; where
the sun at its peak
bends everything
that’s 20 meters
away in sharp
golden zigzags.

yet, at night,
El Niño is the diablo.

armed with raincoats
and umbrellas printed
with a smiling red
bumblebee, they all
rush home, running
in the Crocs they
keep at the insert
of their trolley bags –

lest he sees them;
lest he strikes.

he pours into cities,
provinces, farmlands –
angry, angry, angry
and bringing with him
water that overflows –

he brings so much more,
like Santa Claus, but with
lightning bolts that jolt
30-story condominiums
and thunder that forces
children to settle under
covers earlier than bed
time –

until the rivers swell and
the ocean rebels –

until children close
their eyes and wish
for the wet to go away.

While in another part
of the world, across the
ocean that birthed this
angry man, a blonde
toddler looks up at his
father while he swallows
his beer:

A heartbeat blooms
in the silence that follows;
shreds of snow pelt
their cold cheeks.

They say winter
is mild this year,
on the West Coast,
because of El Niño.

This El Niño feels good,
the father says, and the
toddler smiles at him.
“It’s El Niño,” he says,
with another swig
of dry beer. Belches. 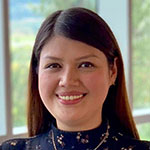 Rina Garcia Chua is currently pursuing a PhD in interdisciplinary studies at the University of British Columbia Okanagan, where she is completing a project on “The Ecological Literacy of a Migrant Ecocriticism.” She is the editor of Sustaining the Archipelago: An Anthology of Philippine Ecopoetry, which was published by the University of Santo Tomas Publishing House in 2018 and nominated for a National Book Award in the category of Best Anthology in English.