Margherita was tiny and hunched. She had light eyes, and always—summer or winter—wore a shawl she kept closed on her chest with her hand, as if clutching a necklace. She lived in a small place under the low porticoes of the city hall, a place that seemed the lair of a wood fairy.

One day, she asked me where I came from.

“Turin . . . ,” she repeated with a sigh, squinting her eyes. “I was in Turin once . . . right after the war. Many houses bore the signs of bombing and many were no longer there. . . . Trams went through the streets—trams are old animals and modern machines—they scared me a little.”

She had never seen the sea, so I promised to take her there.

She had never seen the sea, so I promised to take her there.

We left early in the morning one weekend.

During the trip she remained silent until we entered the tunnels.

She was agitated. Every now and then she mumbled something to herself.

“Margherita, are you all right?”

Finally, after the last mountain, the sea stretched out before us. While we slowly walked down toward its gray-blue expanse, she covered her eyes and asked me to stop.

She opened her hands, freeing for a moment her gaze, then closed them immediately. She did this for some time.

The last time I saw Margherita she was stretched out on a big bed—she seemed swallowed by the blankets. Only her face peeked out, her eyes a faint gray, almost colorless, like the eyes of a newborn.

All of a sudden she covered them with her hands and repeated this “peek-a-boo” of hers, then she smiled at me.

“Poor thing,” her relatives said. “She’s turned into a child.” 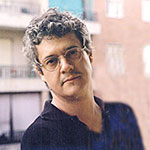 Roberto Carretta is a contemporary Italian philosopher, writer, and translator who lives in his native Turin. 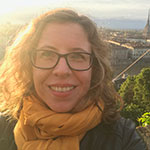 Stiliana Milkova is a Bulgarian-born literary critic, translator, and professor of comparative literature at Oberlin College. She has translated from Italian works by Adriana Cavarero, Italo Calvino, Antonio Tabucchi, Alessandro Baricco, and others. She is the author of Elena Ferrante as World Literature (2021) and of many scholarly articles on Italian, Russian, and Bulgarian literatures. She edits the online journal Reading in Translation.