The Old Man Who Lives Two Floors Below

Down the first twist of stairs and Josie hears she is not alone, like hearing a tree in the wind beyond her bedroom window. The old man: splay-legged before his door like a failing easel, he moves slow as death.

Right there on the mat are the old man’s keys and Josie says, “Let me get those for you.”

When again she happens upon the old man, he struggles to navigate the entrance with a single bag of groceries. “Allow me,” says Josie, working the lock, holding the door.

“Thank you, thank you dear,” as he shuffles past. “But please,” and he motions for Josie to take her lead, up the narrow stairs. He moves slow as death.

Josie finds the old man scattered in the stairwell like a dropped envelope of coupons.

One morning, Josie finds the old man on the stairwell landing, just the one flight to go to reach his door, yet there he rests, his bathrobe cinched at the chest with bony legs spread, darkness within. While he catches his breath. On the marbled floor beside the old man shimmer scarlet drops like liquid pennies. Hard to ignore the stench as Josie slinks past.

Or, he is collecting his mail from the lobby boxes when Josie returns from this terrible conference in Pittsburgh where nothing happened, and with the old man is that tiny dog he shouldn’t have. Josie bends to scratch behind the mongrel’s ear, although the dog scoots this way and that to avoid her touch. “He doesn’t like that,” the old man says. After that awful conference in Pittsburgh.

Afternoons later: his door propped open with a box of Tide, and on the steps is a shoebox and in the shoebox these heinous cherub statuettes, each the size of a soup can. As if from a church yard sale—who knows, Josie goes to church just to meditate. The old man transports the cherubs inside, one by one. “Please, please,” he shoos Josie on down the stairs when she noses in the shoebox. She scans his limbs for lesions and bruises.

Some mornings Josie cowers in her apartment, peeping the peephole, listening for the old man. If she doesn’t have to go in for work and she’s no other reason to leave.

But now Josie finds the old man scattered in the stairwell like a dropped envelope of coupons. One bony hand clings to a foldable wire pushcart, the other to the banister: if the one hand were to release, the cart would rock the last few steps to the landing below; were the other to surrender, the man himself would do the same. His robe has come undone.

Boxes of saltines and jars of peanut butter litter the landing.

Josie rushes to the shaking old man. “Are you all right? Are you okay?” She hopes it does not show in her face, but he is moldy as fruit. It radiates from his body and tramps through Josie, this stink. She says, “Let me help you.”

Josie cups the man’s elbow. Even through flannel, unnervingly bony.

“The cart,” he says, his delicate balance unsustainable. “The cart,” the old man cries.

Josie takes hold of the cart and it folds all the way open. She uses it to prop the man on the steps, then gives it a rattle to relieve it from his grip. Like moving through yoga poses, she lowers herself to the landing and deposits the cart there.

“Where are you going?” Josie asks. “Is there someone I can call?” She climbs a step. His nest of a beard, gray eyes motoring tiny circles. Josie wonders if ever he married, if he’s a widower, if there are children or grandchildren or is he truly, shamefully, regretfully alone. All she can think to say is, “Let me help you.”

Josie reaches for the man’s wrist. He clutches the banister and again cries out, “Please.”

“Please.” He recoils to the bannister.

Instead Josie retrieves a box of saltines, places it in the cart.

“Leave those alone!” the man shrieks.

So Josie quickens down the last flight of stairs, leaving the old man on the steps, lonely as he is proud, through the lobby and through the second door and out to the sidewalk. How is it that air can be crisp? But this air is crisp. Josie draws it in wildly through her nostrils, takes in the morning in great vital gulps, certain that one day the old man who lives two floors below will die in the building and Josie can only hope she will not be home when it’s finally time. 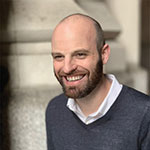 Peter Sheehy is a publishing industry misfit, a New York local and San Francisco expat who waves to cats across streets. His short fiction has appeared in Glimmer Train, Catamaran Literary Reader, Chicago Quarterly Review, and elsewhere, and is forthcoming in the Florida Review.