Race, History, and the Body: Humanity on Display

Standing before a museum exhibit of a mummified five-year-old “Purchased in Egypt in 1895,” a father holding the hand of his four-year-old considers ways to alter the narratives intended for museum visitors.

One Saturday afternoon in November I found myself near Chicago’s Hyde Park neighborhood with my wife and daughter and decided to take a walk around the University of Chicago’s campus. My daughter was then just a couple months shy of turning five, taken to proudly proclaim that she was four and a half! After running around the quad at the U of C making sculptures of sticks and fallen leaves, we stumbled on the Oriental Institute and a bit reluctantly decided to enter.

As we walked in, we discovered that, as is common with certain museums, the entrance had no formal fee but a posted rate for “suggested donations.” Knowing what we might expect in a museum like this, my wife and I looked at one another with a smirk and with a mutual understanding that our people had donated enough to such enterprises; we walked in, wallets intact.

As we entered the museum we walked through the writing tablets of ancient Mesopotamia, awed by the incredible evolution of script, the way that fables, etched into rock, were used as lessons for schoolchildren, lessons to help them locate themselves in the historical trajectory that led to the moment of their childhoods.

Before long we came upon the Egyptian exhibit. I began by looking at a set of scrolls examining the Demotic and the Coptic script with intimate familiarity, taking note of the odd description under one Coptic script that stated, “These are the names of the 12 apostles that could have been used for religious devotion, or perhaps for magic ritual.” Magic ritual, I thought? What an odd choice of language. Having spent my life steeped in the Coptic Church and her theology, I was quite sure that the use of this particular text had nothing to do with “magic ritual,” whatever that might have meant. But perhaps what we call prayer, our colonizers see as magic. Surely, my people would have wished for some magic in the moment that our culture was being robbed and stripped of all its artifacts and their proper meanings.

Surely, my people would have wished for some magic in the moment that our culture was being robbed and stripped of all its artifacts and their proper meanings.

I shrugged and continued looking at the exhibits. Within earshot I heard an eager undergraduate student (no doubt enrolled in a course on Egyptology) explain to a couple, old enough to have been his parents, the detailed intricacies of ancient Egyptian culture. His recitation and sense of conviction was all too familiar, textbook; an insistent yet distant sense of understanding, an equanimous assuredness that lacked any cultural intimacy. That moment gave me a distinct sense of disconnect; here we were, three Egyptians standing not five feet away from him, but how would he have known? We moderns are rarely connected to our ancestors; such a connection would make for far too complex a reality than most care to make, and it would certainly call into question how we might interact with all the artifacts that lay before us. There was a clean (or not so clean) line between us that separated the gaze from the gazed upon. So often, it seems, we go on in this way, severing history, dividing the body amongst itself and calling the past past.

Then, with my daughter’s hand in mine, we turned a corner and found ourselves standing before the body of a young boy; a five-and-a-half-year-old boy, according to the description on the case. Here he was, mummified at such a tender age having suffered an early death, and we were told nothing of him, save his age, an age that they claimed they could narrow down to the month. Like my daughter, on the cusp of a birthday, the museum label claimed the half-year, a familiarity that made it seem as if he was known, as if his birth and life were known. And as I stood before this body, I could not help but think what heart wrench this must have been for his family and community, for what we know for certain is that no matter what the era, what the locale, what the circumstances, the death of a five-year-old is a significant and life-altering event; it is a time of mourning, deep mourning.

As I stared at his body sitting before me in a glass case in Chicago, lying on display in a manner anathema to the traditions of our people, past or present, I tried to contain the hurt and anger I felt in front of my daughter. Then, I read the small inscription on the case that stated: “Purchased in Egypt in 1895.” I was immediately struck by the use of the term “purchased,” an exclamation not only of ownership but of a sense of “legality.” The typical term for museum antiquities is “acquired”; though an imperfect and problematic term, it leaves room for the truth, a space in understanding the colonial relationships between people and power and those people and things “acquired.” But here we are purchased, bought, legally owned. And I stood there a bit speechless beside her, struck at how she and this boy were almost exactly the same size, how in a different moment, this nameless boy on display could have been her. I sat silently, trying to figure out how to explain this to her. Trying to figure out how his parents, who lost him at such a young age and took such care in preserving his body, as was the tradition, would feel if they saw him now, thousands of miles from home, disrupted from his eternal resting place in the cold, sterile rooms of an American university. I took solace only in knowing how our people view the spirit and tried to tell my daughter, not about colonialism and the theft of our culture—she knew some of the truth of this, even at that age—but what I tried to do instead was to explain to her that the boy before us was not really him, not the fullness of him, anyway; that they took his body from its intended place but could not capture his spirit from that place, which had long since departed. Had long since been freed.

We stood before that case for a while, she looking at it with curiosity, me largely silent and thinking that there was something terribly wrong about this, terribly wrong about the normalization of bodies in cases, even as an attempt to educate. There was a truth missing there, a fundamental dishonesty in that experience which drives me to want to see a different world for my children. I began to wonder what alternatives we might have. We cannot upend history, but God knows we can face it. And in that moment I thought, what might a replica of this boy’s body feel like, as opposed to his actual body? How might this entire experience shift if we were to alter the narratives intended for museum viewers? What might change if we told this story in its fullness, if the museumgoer was immersed in the pain and reality of history? If the display were not a display, but an experience, a calling, an implication? What if we, honestly, linked the past to the present? What if every viewer had to face the truth?

What might change if we told this story in its fullness, if the museumgoer was immersed in the pain and reality of history?

I stood still for a long moment in my thoughts, with my daughter’s hand in mine. All the while, students were walking around pontificating on this and that, looking at this body as if it were an object, a thing. As if this were not a child once full of life and breath. How easily the contexts we create shape our memory. As if his family and community had not mourned and prayed fervently as they laid him to rest, as if his grave was not robbed by the hands of thieves, as if he wasn’t stolen from his home, as if to say, all these years later, we still own you, the story of you. As if to say that anyone who finds this peculiar is the peculiar one, because there is only one way to see the world. And in the end, all I could think was:

It is difficult to trust people who have little respect for human life.

And so here we are, now, in this moment, race, history, and the body, our bodies, consistently implicated in all that we do. And here we are in this moment where we are taught the only way to find full safety and comfort for our bodies is to sever our mind from body, to sever our spirit from body, to sever our histories from our bodies. To say, the past is past. To say, I accept. I accept that this is not my son’s body in a glass case, because after all he’s not really my son. To say all the ritual, all the song, all the belief, all the sweat, all the prayer that has culminated and shaped itself into these remnants of culture that lie before us is a distant thing, is an antiquated thing, is a thing for a time not our own. And in the end, all I can think is:

It is difficult to trust people who have little respect for human life. 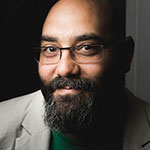 Matthew Shenoda is the author and editor of several poetry collections and a founding editor of the African Poetry Book Fund. He is currently associate provost for social equity and inclusion as well as professor of literary arts at Rhode Island School of Design (RISD).