The Pregnant Woman from Zamboanga

In this story by an indigenous writer from the southern Philippines, a crime continues to haunt a local’s thoughts.

It had been some time since Lolo Bebe passed away. About ten harvests of corn. But his story about the pregnant woman from Zamboanga would haunt my thoughts every time I passed by the stream. According to Lolo Bebe, during the 1970s, he was one of those who worked so that Matanao could have a road. Back then, our town Matanao was all but a forest. The town ran up all the way to Columbio, where the mountains of Davao del Sur and Sultan Kudarat converged. When I passed by the stream, I would make the sign of the cross and sing Christian hymns.

At night when the gust of wind was strong, Lolo Bebe would begin telling stories about events from long ago. All kinds of enchanted beings, creatures, and aswang figured in Lolo Bebe’s tales. But what wouldn’t leave my mind and imagination was the pregnant woman from Zamboanga. When I remember the story, the hairs on my body stand on end. I could hear in my mind the pregnant woman’s scream and the cries of a stillborn infant.

When I remember the story, the hairs on my body stand on end.

I grew up with a lot of questions about the pregnant woman from Zamboanga. But Lolo Bebe, whatever he narrated, he could only tell as much. He wouldn’t omit or embellish.

One afternoon, I got home late from school. Because school’s closing was near, I was engrossed in the last dance before we proceeded to high school in Bangkal. The surroundings took on the color of young night. Of the five of us—Jek, Melda, Tonya, Iday, and myself—I had to go home to the farthest house. I needed to cross the stream, which I dreaded. I wanted Jek to come with me, since we were cousins, but she said she had to pick up some firewood and her mother was already looking for her.

I held a rosary, recited all the prayers I knew. My sweat was sticky like honey. The stream I walked by was littered with soap wrappers, sachets of shampoo, and more rubbish that people left behind. Lolo Bebe had said that back in the day, they would drink from the stream. But now, the water had carabao dung floating on it, and human shit. Good thing I was able to distract myself, thinking about trash. Before I knew it, I managed to cross the stream. It was dark and I could no longer see the road. Good thing I met someone holding a torch.

I greeted her, “Good evening, Te!”

The pregnant woman nodded. Her right hand held her belly. She held the torch in her left hand. She was a small woman, wearing a wraparound skirt, and barefoot. I didn’t know who she was. Who could she be? was the question in my mind. Up ahead, I stumbled into Nong Karyo.

“Nong, did the woman I just saw come by your place?”

“A woman? What are you saying, Merlie? Only us two here on the road. I’ve been here for a while now looking for my kid goat. There was no woman here. You must be seeing things.”

Nong Karyo might have thought I was talking nonsense since he went about his business and ignored me. I ran quickly to our house and drank some water. I walked toward the door and peered at the stream. The woman’s torch was still visible. I could feel someone watching me. My knees shook. I didn’t tell Nanay and the others about what had taken place. They might just laugh. That night, I slept in fear. Lolo Bebe’s tale appeared in my dream.

The next day, I told Tonya and Iday about the pregnant woman I came across last night by the stream.

“Maybe it wasn’t a ghoul, uy,” Iday said to me. “Maybe you just didn’t see her face clearly, but really she was just a neighbor.”

I kept quiet since it was hard to argue over something they themselves had not seen. All day at school, I was troubled. When afternoon came, my heart began to beat faster because it was time to go home and I would have to pass by the stream. Good thing Jekjek walked home with me. But since dusk had fallen, we passed by the stream without making a sound.

While we were walking, I saw from the corner of my eye a shadow. I turned to see. The shadow slowly moved to where we were. I prodded Jekjek, and she also saw what I’d seen. Jekjek’s eyes grew large and round. The wind was cool, and made cooler by the cold stream. We smelled what seemed like a dead animal. We crossed the stream in a hurry.

On the side, there was a lizard crawling toward the carcass of a pig that had been thrown into the stream. I’d already seen the carcass earlier in the morning, but in the afternoon, it had begun to smell even more.

Ahead in our village, someone was taken to the hospital because of stomach pains. The healers had said that the children had offended those-not-like-us because they played and made noises by the stream last Friday. But according to our teacher, stomach pains were caused by microbes in drinking water. Maybe it wasn’t the children or the engkantos’s fault that they had stomachaches. Maybe the ones to blame were the parents whose hygiene was poor.

The shadow that had been moving toward us, it was gone. As we walked home, I turned back to the stream. “Jek, do you remember this story Lolo Bebe used to tell us?”

Her forehead creased. “Which one? Lolo had a lot of stories.”

I paused and turned to Jekjek. “The one about the woman from Zamboanga. The woman who was killed by the stream. Don’t you think she came back to scare people or seek revenge?”

“Sus! You’re already of age, Day, uy! You still believe in ghosts? Maybe it was just Nong Karyo’s wife we saw since until now they still hadn’t found their goat. I’ll go ahead, uy. You might think of something else, ba. I also get scared, you know.”

Jekjek patted my arm and went home. That night, my sweat was as cold as the stream when it flooded. Cold but sticky because I dreamed again of the woman from Zamboanga.

“Lo, tell me the story again about the woman from Zamboanga!”

Even though he was tired from the corn fields, Lolo told me the story about the woman. Lolo Bebe peered out the window and began his tale as though he was taking us with him to the past.

“This happened in 1974. It was March, and time for harvesting corn. The weather was so hot. I was one of the workers constructing the road. Our engineer was from Davao. There was a huge rock in the stream here in Consabac that we couldn’t knock down. A number of dynamites had been blown up, and our equipment wouldn’t work.

“The engineer was baffled as to how he could hasten the project. One of my coworkers said that we should see if those-not-like-us in the area wanted an offering.

“It was a Saturday, and we were wondering why a van arrived in our place. We walked over to the engineer. He had become thinner and looked frail. An old man also got out of the van bringing an assortment of leaves. But there were more passengers in the van. Somebody inside the vehicle was moving, and the engineer shut the door.

“At that moment, the engineer asked the five of us workers to help prepare the offering. We had food, drinks, but there was no white chicken or any kind of animal. We only waited for the engineer’s orders. He called on us five and firmly instructed: ‘Whatever you see, leave it here.’

“At twelve in the evening, a woman was escorted out of the van. Her eyes and mouth were covered. The woman looked weak, could hardly make a step. Even more pitiful was that she was pregnant. My companions brought the woman to the huge rock by the stream. Someone started the steamroller. I didn’t understand what they were about to do, but that night I knew it was dreadful.

“At twelve in the evening, a woman was escorted out of the van. Her eyes and mouth were covered.”

“They started the steamroller five times. But when it finally worked, Isyot, the driver, got down, because he couldn’t stomach it. Pre Elmar took over and right then and there, without blinking, he ran over the pregnant woman. Her scream was deafening. Seconds passed, my bones and flesh shuddered. I couldn’t believe what I’d witnessed. The noise of birds grew even louder. The damp wind slapped me, smelling of blood. From the woods emerged huge lizards with skin the color of gold that crawled over to the woman, and in a blink, the dead body and the lizards were gone!

“The engineer returned to his vehicle and rode home. My companions and I went quietly back to our houses. According to Pre Elmar, the woman had come from Zamboanga. The old herbalist who arrived with the engineer was the one who communicated with those-not-like-us. They asked for a pregnant woman as offering. That night, a crime had been committed. A crime against a human being, but a sacrifice and an offering to nature.

“The next day, the bulldozers and other machines worked again. The rock was easily destroyed. After some weeks, the road was constructed. We named it Fatima, the pregnant woman snatched from Zamboanga.”

Translation from the Cebuano 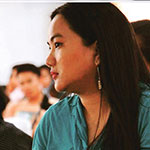 Elizabeth Joy Serrano-Quijano has short fiction recently appearing in the journal Banwa and Words Without Borders’ special issue on writing from the Philippines. 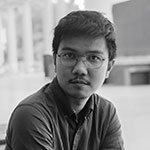 John Bengan’s translations of Elizabeth Joy Serrano-Quijano’s work have appeared or are forthcoming in Words Without Borders, Shenandoah, and LIT. He teaches at the University of the Philippines Mindanao.