by
Elyas Alavi
translated by
Fatemeh Shams and Leonard Schwartz

Translator’s note: Few voices are more distinctive in the world of contemporary Afghan poetry than Elyas Alavi. The dynamic young poet, now an Australian citizen after fleeing war-torn Afghanistan under the Soviet occupation to spend years as a refugee in Iran, is known for writing blank verse (She’r-e Sepid). In a literary tradition heavily influenced by classical forms such as the Qasideh (ode) and Ghazal (sonnet), Alavi’s persistent poetic practice in the form of blank verse has made him a pioneering voice in the modernist movement of Iran and Afghanistan in the past two decades. His unique “inimitable simplicity” (sahl-e momtane’) is characterized by this signature blank verse style, the use of Dari dialect, and the unflinching exploration of politics and injustice toward refugees in the Middle East and beyond, making Alavi an important voice to study.

Born in 1982, in Daykundi, Afghanistan, Alavi started his poetry career in 2001 as a member of the Dorr-e Dari (Pearl of Dari) literary association for Afghan refugees in Mashhad, Iran. He rose to prominence as a poet in 2008, when his first poetry collection, ‘Man gorg-e khiāblābi hastam’ (I am a daydreamer wolf), won a number of prestigious poetry awards in Iran, Tajikistan, and Afghanistan, among them the Broadcasters Poetry Award (2009), the Annual Book Award for Young Poets (2009), and the Simorgh Peace Award (2012). His other collections to date include Ba’zi zakhmhā (2011; Some wounds) and Hodūd (2015; Frontiers).

In 2013 Alavi’s first book was translated into Kurdish by the prominent Kurdish writer and translator Mariwan Halabjaee. A selection of his poems has been also translated and published in The Pearl of Dari: Poetry and Personhood among Young Afghan Refugees in Iran (Indiana University Press, 2015) by the anthropologist-scholar Zuzzanna Olszewska. Mariam Al’attar, the scholar of Islamic Studies, has also translated some of Alavi’s poems into Arabic.

In 2008, as Alavi settled into a new life as an Australian citizen in Adelaide, he began to pursue a professional career in painting and installation art alongside poetry. After completing bachelor’s and master’s degrees in fine art, he went on to hold ten solo exhibitions worldwide. There is a natural symbiosis between his writing and painting, with each strand of his creative output informing and influencing each other.

The poems that follow here highlight Alavi’s accented and discursive poetics. His poems offer compelling portraits of violent moments in world history, most notably the Middle East. He provides a rich and uncompromising poetic record of key themes such as displacement, war, racism, and love, distinguished by the evocative use of Dari vocabulary. Read in their original Persian, the poems reveal the ways in which the poet attempts to assert his presence in the standard Iranian Persian as well as maintaining a dialogue between two dialects of a language divided by geographical borders. Although this potent linguistic subtlety is lost when translated out of Persian, in translation, his poems are given additional political and cultural depth by triggering questions around language, border-crossing, belonging, ownership, and identity.

I Do Not Believe

My beloved if
Death be here for you
Let it be in tuberculosis’ form
Or the form of bitter cold,
Not as prey of suicide bombing.

You should have the time
To review your memories,
To review the particulars of your body,
To make plans for your departure.
Not to depart the house on your feet
And we only find your shoes in the bazaar.
Not to ever find your hands or your smile.
Never to locate your eyes.

With my own eyes I ought to
Witness your death, your final breath.
My fingers should touch your eyelids to close.
Otherwise, no one will believe it, forever
I myself will not believe it.

Brother Khosrow
I am a Ugandan Boy
they have placed leaves on my body to lash my feet,
to make me dance
till I pass out.
They removed the leaves and what
does the sweat of a black boy do to the cannabis leaf?
They say it leads one to forgetfulness:
forgetfulness!
Brother Khosrow, everyone wants to forget.

Brother Khosrow
I am an aboriginal girl
they chained my father to two white horses
and dismembered him
by law, they separated me from my mother
and handed me to a white family,
the father of the white family
would come after me every night
and open up the buttons to my black breasts.

Brother Khosrow
I am the ‘Queiq River’
till yesterday
the young fish shared their naked body with me.
But today, I am bitter
and bring up silent travelers from the other side of Aleppo
fish with hands, tied,
and with eyes, tied
and with deep holes in their foreheads.

Brother Khosrow,
I wrote on my T-shirt
“1948”
I am a survivor of the Nakba
I am Palestine.

Brother Khosrow
You are Kurd
I am Hazara
We are full-blooded brothers
Having lost each other for centuries
Until tonight, in your small house in Sulaymaniyah
Where this vodka has made us so tipsy
We can understand each other’s language.

Brother Khosrow,
at the very moment you and I fill with joy
the seas are moving
the mountains are moving
they cross one border
and enter another
we will wake up one morning
and the water will have sunk us all
as water surrounds all places and times,
the clothes of Auschwitz survivors hung on hangers,
scarves of forty Hazara girls with almond-shaped eyes
placed on the rope, in the courtyard
Van Gough’s small ear in the kitchen’s sink:
The earth will discharge everything it once concealed
all secrets will begin to float
Virginia Woolf’s bitter love
Hitler’s melancholic solitude and
the wounded body of Bin Laden
and you will see in his eyes
what beautiful, innocent eyes . . .

Brother Khosrow
the world saddens me
the sunrise and the
humans, turning round and round in an empty square
the church bells
my father’s voice
and the voices of the beautiful girl who reads news of the war.
Brother Khosrow during these moments of reading poetry
how many gay boys in Rwanda are lead up the stairs to death?
In Kandahar, how many former commanders currently MPs
Are waking up in the beds of thin children?
How many Baghdadi women return home from the cemetery?

Home?
Home, a ridiculous consolation
Home is nowhere,
no one gets to be martyred,
everyone dies
and rots
like those five thousand bones rotting in the Halabja cemetery.
The scent of banana and apple and milk intoxicates them:
those real scents, the scents of fruit.

Brother Khosrow
This time when you cross a border, take a deep breath
The distance between the borders smells like blood.

Brother Khosrow
How is it a bottle of Russian vodka unites us?

A bottle of vodka the factory for which
is close to the rifle factory and its telescopic sights,
the same guns with which ISIS soldiers calm Izadi children
and NATO soldiers joke around with Helmand’s farmers,
the guns with which anonymous soldiers of the twelfth Imam
send the illegal immigrants of Taftān to hell
and Gulf Sheikhs shoot up the sky

Brother Khosrow
How is it a bottle of Russian vodka unites us?

Read the poems in Persian [View or Download PDF] 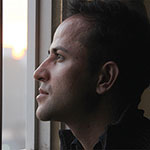 Elyas Alavi is a poet and visual artist based in Adelaide. Born in the Daykundi province of Afghanistan, he has published three poetry books: I Am a Daydreamer Wolf, published in 2008 in Tehran (5th ed., 2016), followed by Some Wounds (Kabul, 2012) and Hodood (Tehran, 2015). 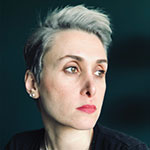 Fatemeh Shams’s third collection, When They Broke Down the Door, translated by Dick Davis, received the 2016 Latifeh Yarshater Award. She won the Jaleh Esfahani poetry prize for the best young Iranian poet in 2012. 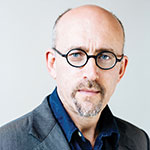 Leonard Schwartz’s recent books include The New Babel: Toward a Poetics of the Mid-East Crises (University of Arkansas Press) and Heavy Sublimation (Talisman House).