The students noticed an opening at the bottom of the fence, a tear in the wires. On the other side of the fence was the outside, which they only saw from the bus window when they were on their way to or from school.

We knew what it meant when the classroom bell rang on Friday at noon, so we let our balls bounce away in soft dribbles, dropped the skipping rope at our feet, swallowed the piece of sandwich we were chewing and threw the rest into the green trash can, got in line, raised our arms, pointed our index fingers, and touched our classmate’s shoulder to make sure we were standing at arm’s length. We walked in single file from the yard on the cracked concrete path that ran along the wire fence to the quadrangle in front of the school’s administration building. When we arrived, we took our places. We were twelve, we were seven, we were nine. We knew where and how to stand: at arm’s length, both sides, eyes fixed to the front and up, looking at our teachers, who were standing at attention in a row on the teetering old wooden platform.

They sat, and on cue, as one, we performed the routine they had taught us, the choreography we knew by heart. We lifted our hands, stomped our feet, cupped our ears. We moved to the side, stood on our toes, stretched out bodies, higher, tighter. One eye fixed on the horizon, the other looking at them, to see whether they noticed how taut our limbs were, how much poise twelve- and seven- and nine-year-olds could have.

They clapped and then addressed us, their voices booming over the loudspeaker. They made announcements, declarations. They told us we were good. They praised us, telling us how proud of us they were for doing the routine with such honor and grace, of how much promise we were showing. They said that our bodies were the bond that bound us to this place, to them, that we were part of the same choreography they performed when they were twelve and seven and nine. Then we, the body of students, raised our arms and pointed our index fingers toward the sky. We sang the anthem, with our eyes closed, our mouths wide open, our tired bodies swaying like the flag that was flapping slowly on the pole.

When assembly was over, the teachers entered the large administration building. We headed back, single file, toward the yard, walking along the concrete path.

Everything that wasn’t sanctioned was forbidden, and they had never said anything about holes in fences.

We noticed an opening at the bottom of the fence, a tear in the wires. On the other side of the fence was the outside, which we only saw from the bus window when we were on our way to or from school. We knew we could get into trouble because everything that wasn’t sanctioned was forbidden, and they had never said anything about holes in fences.

But the outside seemed so vast, so pathless. We stood there, looking at it, not knowing what to do, how to move. We only had each other to look at. And as if on cue, we dropped to the ground onto our elbows and crawled under it.

We began to run. We looked back to the administration building, its doors shut, only the flag waving above. Our arms were flapping in every direction, our bodies moving without choreography; we, the united body of students, were all limbs. We were twelve, we were seven, we were nine, jumping and whistling through the dried-up field, kicking rocks and kicking up dust.

We, the united body of students, were all limbs.

We ran until we couldn’t see the school or the flag, until the sun was in the middle of the sky. We arrived at a fence of thin orange wires, separating nature from nature. Some of us knew what the fence was for—after all, some of us were twelve. We taunted each other. We stood in front of it in a row. We raised our arms and stuck out our index fingers, our eyes closed, closer, closer, toward the fence, until a current shot up our arms, ran through our bodies. We dropped to the floor, and our yells turned into laughter. The current coursed through our tired bodies as one.

We needed no clock; our bodies knew that the break was almost over, so we ran back and slipped back under the fence, unnoticed. We walked into class and took our seats. We knew how and where to sit, backs erect, hands on desks, eyes fixed to the blackboard. Our teachers told us about the history of this place, about the movements and melody that bound us together. And when they asked us to answer a question about where we came from, we raised our arms from the table and stretched our blackened index fingers to the sky, because we wanted to take that oath again. 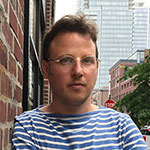 Etan Nechin is an Israeli writer living in New York. He is the online editor of The Bare Life Review: A Journal of Immigrant and Refugee Literature. His writing is published in Boston Review, ZYZZYVA, the Brooklyn Rail, the Independent, Apogee, Columbia Journal, and more. He is the recipient of the Felipe de Alba Award for Fiction.