In this political satire, an innocent meal becomes a bureaucratic nightmare.

The maître d’, who was called over by the waiter, asked:

“I beg your pardon?”

The maître d’ looked and saw a cockroach in the middle of the salad.

“Yes, you say? Well I say: no. I ordered a salade niçoise, which does not—as far as I know—come with cockroaches.”

“Let me bring you another salad.”

“I don’t want another salad. I want an explanation.”

“It was an accident.”

“An accident, you say. Well I say: I am not so sure. If a cockroach had strayed from its pack, had wandered into the kitchen and landed in the salad—now that would have been an accident. But that is not what happened. For one, the cockroach is dead. There is no doubt that your salad dressing is, as they say, killer—but I doubt it was the cause of death. It’s obvious the cockroach was dead before it fell into the salad. Its body shows no signs of struggle, which leads me to believe it was the victim of pesticides used for killing armies of roaches and other creatures in your kitchen. It’s impossible to say exactly when it happened. An autopsy would reveal the exact time of the cockroach’s death. The fumigation might still be affecting the food in your kitchen—not only garnishing it with dead insects, but seasoning it with invisible poison as well. If this is true, then I would like an explanation. I am a citizen; I know my rights. This is a democracy.”

There is no doubt that your salad dressing is, as they say, killer—but I doubt it was the cause of death.

“I will call the manager.”

The manager, who was called over by the maître d’, arrived. He confirmed that the kitchen had undergone a fumigation, but that it had been a month ago. The restaurant was closed during the operation. There was no danger of the food being contaminated, nor evidence that the cockroach was a result of the recent fumigation.

“So,” the client said. “Perhaps it took a while to die. Perhaps it stumbled miserably around the kitchen for a month before it saw my salade niçoise and chose this lettuce leaf as its shroud. Believe me, I will spread the word. What kind of establishment is this?!”

The manager called the owner of the restaurant, who soon appeared at the door. The fumigation of the kitchen had been mandated by the Ministry of Health. To confirm this, the owner had brought along the municipal health secretary, who said he had been following ministry protocol. The head of the ministry was called; when he arrived at the restaurant, he accepted full responsibility for everything. Except the cockroach. The cockroach on the salad could not be, chronologically speaking, a result of the fumigation. Unless someone in the kitchen had kept it, preserved it in ice, and waited for the perfect occasion to . . .

The patron interrupted the minister’s speculation with a slap on the table and asked to see his superior. The minister sighed and took his cell phone from his pocket to call the president of the republic, who arrived, sharply dressed, in under half an hour. He had just left a reception at the presidential palace.

“What is it?” said the president.

The president looked and saw the cockroach.

“This is your responsibility.”

The president nodded. He asked what it was he wanted.

The president apologized. The man did not accept his apology. The president offered compensation. The man refused. They called the minister of the army.

The general arrived and, like the maître d’, asked:

The man pointed at his salad. The general looked and said, “An olive. Great!” He took the cockroach and swallowed it. Later, the man was arrested and sued for falsely accusing the restaurant. It was a democracy, up to a point.

Translation from the Portuguese 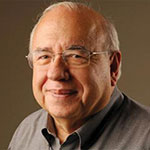 Luís Fernando Veríssimo was born in 1936 in Porto Alegre, Rio Grande do Sul. The son of author and professor Érico Veríssimo, he grew up between Brazil and the US. He has published several novels, and his crônicas have appeared in major national publications. He was also the author of As Cobras, a comic strip that began in 1975, in the midst of the military dictatorship, and ran for twenty years. 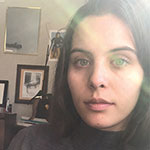 Anna Vilner is a Russian-born American translator. Her work has appeared in Hart House Review, the Massachusetts Review, Columbia Journal, and elsewhere. She holds an MFA in literary translation from the University of Arkansas.