In this work of creative nonfiction from Cuba, plague is something common shared with those who lived in Thebes.

I carefully open a pregnancy test kit. It’s the most precious relic in my corner of the world. It’s the only one I’ve got. I’d rather not go out and buy another one. So it better work. I’ll have to settle for whatever the results might be. Positive or negative. I feel like Schrödinger’s cat inside a box. Will the poison be released? Positive or negative? It’s no time to cry. Will Schrödinger’s cat shed tears? It’s time to face this long wait, this headless, footless creature, while we all dilute. Time is an elephant, its feet resting on my neck.

I pee. The test stick turns pink. The first line appears, which means everything is in order. Lucky me. I’m a cat caught between the commonplace of confinement and its destiny. I wait for the second line to appear. Negative or positive? Negative. It’s a day like any other, one more to be crossed out on the calendar inside my mind.

My grandmother is waiting for me in bed. I can’t think of any reason why I want children when she’s turned into a baby. I feed her. I pick her up. I feel the smell of her old age, which is a bit like the smell of childhood, but more subdued, more diluted in time. I take her to the bathroom. We repeat the usual routine. The hot water, the hot towel on her belly, lifting her feet, rubbing with soap and patience. She can’t use her arm. I feel like exploding, listening to her hobbies, picking up the towel that has fallen on the floor a thousand times. I’m about to explode. Diapers. I’m going to explode. I’m dynamite. She scolds me. I humor her. I answer her with some curt words. Talcum powder. She gives them back to me. She can’t use her leg. I kiss her, and she kisses me back. I bring her pills.

Those pills that keep her alive have already become scarce in Cuba because of the sanctions.

The day crawls forth. It’s hot. Quarantine is unbearable.

The day crawls forth. It’s hot. Quarantine is unbearable, but this wet, steamy air in my lungs makes it all worse. This heat makes me want to make love and dance, but outside, in the outside world and at other times.

I write. I have to. I force myself to write. It’s not a matter of discipline or rigor necessary for the trade. That, too. But now I carry out this task like any other, a part of routine to some extent, which diffusely ties me to sanity. I lose myself in words. It’s not creation; rather, it’s survival. I write a version of Oedipus Rex. Tragic myths right now? Yeah, why not. Oedipus wears a mask. Jocasta desperately seeks a ventilator. Plague is something common we share with those who lived in Thebes.

I write a version of Oedipus Rex. Oedipus wears a mask. Jocasta desperately seeks a ventilator.

Art kills as often as it saves. For now, it saves.

Eating is a biological function. We need to carry on biological functions. After all, breathing is also one of those functions done automatically. Eating, no. Eating requires a deliberate effort, an active effort. You must feel the food in your mouth, commune with it, and chew. It’s important to chew, swallow. But food is not appetizing these days. It has no hope. And we’re running out of it, like the pills that keep my grandmother alive.

Here in Cuba, we all fear that our food will run out. That we no longer have chicken, rice, beans, the basic necessities that ground us in normality and eating routine. Such fear is not unfounded. It exists. It’s real. It could happen. It’s a horrible fear. People flood the streets scrambling for a bottle of oil, a packet of mincemeat, and canned goods. Small triumphs in this moment of uncertainty. Find butter, a luxury. Ice cream, a utopia. We have bread. We all pray for our daily bread. In Cuba, the fear of hunger is more prevalent than the fear of confinement or the pandemic.

My neighbors wear grim faces. They exchange tidbits of their lives through their windows. They speculate on the whereabouts of a particular food item. A moment later, they all go there in a herd, on the hunt for some fleeting product. A few years ago, extreme hunger, a terrible famine, struck Cuba. Back then, people ate cats in lieu of beef. Now I hardly see any cats. What will they eat when beef runs out again?

I count my food provisions. I’m an ant in its hole. They will last three more weeks, if we’re careful, if we eat little, just enough. If something doesn’t go wrong. I’d rather not think about that possibility. I eat, sticking to the biological function.

As the day slides by, the steamy air steps aside. In the midafternoon, claustrophobia sneaks up on me. It passes right away. It’s a diffuse fear, a piece of paint on the canvas. I’m getting used to it. I’m tough. I’m iron. Neither the heat nor the pandemic will break me. I’m an ant. I’m Schrödinger’s cat. I’m alive, still breathing in the midst of poison. There’s no such thing as confinement. There’s no cage. It’s not here. It’s not here.

Repeating myself while waiting for the next day is a good strategy. It works.

Grandma is sleepy. I put her to bed. She sleeps like a blessed elderly woman. I wish I were old, just for a moment, so I could sleep like her.

Out there, adrift, I’ve got the famous pregnancy test kit, which came back negative. I’d like to keep it as a souvenir. No idea why, though. As a testimony, perhaps. But of what? An ordinary day. An extraordinary day.

It’s a long wait for a country that has waited too long. 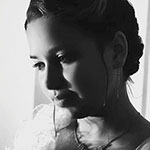 Elaine Vilar Madruga is a Cuban poet, fiction writer, and playwright whose work has appeared in numerous literary journals and anthologies around the globe. She has authored more than thirty books, most recently Los años del silencio (2019). Translated by Toshiya Kamei, Elaine’s short stories and poems have appeared in venues such as Bitter Oleander, the Magazine of Fantasy & Science Fiction, and Star*Line.

Toshiya Kamei holds an MFA in literary translation from the University of Arkansas. His translations have appeared in venues such as Clarkesworld, The Magazine of Fantasy & Science Fiction, and Strange Horizons.