Papa received a scythe from a co-worker as a present. Mama is horrified. “A scythe in our house?” Papa wants to reassure her: “I’ve set it in the cellar.”

“For god’s sake if I grab for it there in the dark!”

Papa laughs. “But you won’t! I’ve leaned it against the cellar door outside.”

The wife cries: “But then the neighbors could kick the handle and the scythe could fall on their head!”

The husband marvels at her ignorance: “I’ve disassembled it, and the blade is set in a plastic bag next to the handle.”

The woman is filled with horror, as if Death himself were standing before her. She cries again with all her strength: “A scythe blade in a plastic bag! Have you lost all your good sense?”

Papa can’t stand it anymore and bellows: “You are hysterical! You belong in the nuthouse!” In the blink of an eye the family increases; the son and daughter-in-law have arrived. They have barely come through the door before feeling sorry for poor Papa. The son says, laughing, “Rest assured, Mama, I’ll bring the scythe to the garden tomorrow morning and stow it in the shed.” Mama can think of nothing but her grandchildren, who love to play in that shed. The son’s patience is now wearing thin. He can’t imagine that his children would want to play with the scythe, of all things. Then he answers the telephone. It is the daughter. Mama wishes she could throw herself through the telephone wire onto her daughter’s chest. But the daughter has her own concerns and says, “Mama, I believe you are not all there.”

The woman hangs up the receiver and believes, gradually, that she is not all there.

Then the doorbell rings. It is the wicked neighbor, and she says: “You really are not all there! You leaned a scythe against the cellar door in a plastic bag. You belong in the nuthouse, you know!” The woman shuts the door and her entire family behind her and hurries down the steps. The wicked neighbor trots behind her. Having reached the bottom of the stairs, they clear away the dreadful plastic bag like it’s a barrel of nitroglycerine and wrap the scythe blade with thick layers of newspaper and tie them together crisscross with string. But the neighbor has to do the last part. Tears flow out of our mother’s eyes like a stream, so that she cannot see or do anything. The wicked neighbor closes the cellar door and takes Mama by the hand. She brings her into her own kitchen and brews her a cup of coffee. Mama says, “And then they always say: ‘Poor Papa!’ Has one of my children ever said: ‘Poor Mama?’ Never! It’s always poor Papa.” The neighbor fetches the coffee cake out of the fridge, brews herself a cup of coffee, and sits herself down.

Editorial note: From Nobody and Other Stories, © 1989 by Christa Reinig. 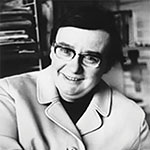 Christa Reinig was born in Germany and began her career in East Berlin, although she published in West Berlin. Reinig wrote fiction, nonfiction, short stories, and poetry, her work often marked by humor and black irony as well as her lesbian identity. After winning the Bremen Literature Prize in 1964, Reinig settled in Munich, where she lived until her death in 2008. 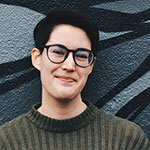 Nita Tyndall is a queer author and translator from North Carolina. While they’ve been writing for a while, they only recently discovered their love of translating. Their first novel, Who I Was with Her, will be published by HarperTeen in fall 2020.