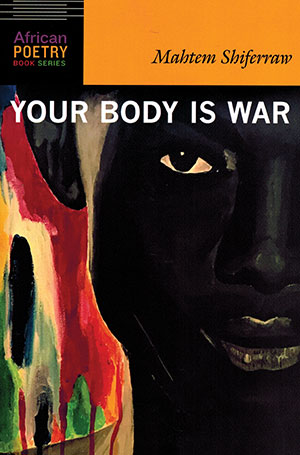 Embattled Representative Ilhan Omar recently said of herself and her fellow freshman congresswomen of color, “We are not there to be quiet. We are not there to be invisible.” The same may be said of Ethiopian/Eritrean American poet Mahtem Shiferraw’s sophomore collection, Your Body Is War. The award-winning poet’s new volume is a radical act of storytelling, of community, and, most crucially, of survival. With distilled clarity and surprising ease, Shiferraw turns her considerable poetic gifts to the forbidden topics of gendered violence and the trauma of war.

An early poem, “The Art of Invisibility,” opens a powerful conversation about the toll of sexual violence that Shiferraw will continue throughout the collection. “So I have mastered / the art of being invisible, / so breathless, if I opened my mouth / only clouds would come out, // and if you touched my flesh / it is not there, it is somewhere further / safe behind the heads of eucalyptus trees, behind mothers, behind women // who have eyes even in the back of / their heads.” Violence was meant to erase the poet, but in unforgettable lines Shiferraw redraws not just herself but a community of women standing sentinel beside her, bound together by their common wounds.

“The Yellow Woman” uses restrained language as arresting as its sister poem, “The Art of Invisibility,” to give a final answer to the world that would unmake the poet: “I am yellow, / I have yellow in me // and it does not / let me die.” Short, sharp stanzas lay bare the will to survive, but the structure also builds corridors of space and light for readers to catch their breath while remaining immersed in the power and pain in this poem.

Sexual violence is concentric to war—the two cannot be parsed—but in this collection, Shiferraw gives war its own vocabulary. War is inheritance passed on unwillingly. War is a haunting of “papier-mâché” ghosts that come in the night, in the daylight hours. War is Asmara and also America, for gender-based violence pervades both there and here. But above all, war is a force that shatters the self. In “Death by Trains,” Shiferraw grapples with the contrary impulses of a fragmented personhood: “I want to say, / I need accomplices / to hold her down; // she is unafraid // of things moving, things stagnant, things poised, / things sharp, things enveloping, things tall, / things suffocating, things undead, things numb. // I am afraid / of everything.”

As Shiferraw gives space to the messy multiplicity of a self born from trauma, again she offers a rebuke to the demand that she silence the complicated. Throughout the collection, the poet’s lens expands beyond the self to other women, most movingly her mother. In “The Fruit Mother,” Shiferraw returns to the symbol of cactus fruit, also found in her 2016 collection, Fuchsia. With the beles, the reader is again plunged into a violent invasion of the domestic. “My mother is a cactus fruit, but her thorns / have been plucked out carefully, and when / they cut her open, she bleeds a sweet blood / and squirts out quickly from her coat.”

“No story ever happens alone,” author and fellow Ethiopian American Maaza Mengiste said of the refugee experience. As Shiferraw refuses silence, rejects erasure, she braids the pain of women she loves into her poetry. Indeed, the poet writes on a continuum, refusing boundaries. And in so doing, Your Body Is War gives the reader stunning poems that re-create the pain and triumph of women the world would rather unsee.