Things I Have Withheld: Essays by Kei Miller 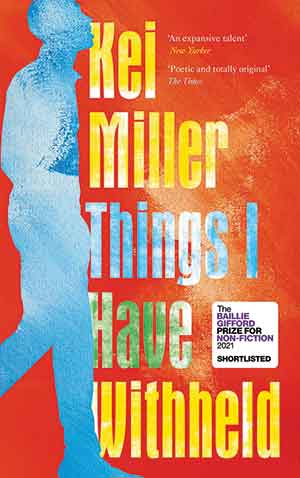 POET AND NOVELIST Kei Miller is one of the most prolific Jamaican writers of his generation. Things I Have Withheld is Miller’s second collection of essays, and each essay explores the complex intersection between race, sex, gender, the body, belonging, and the accompanying silences regarding each. As the title suggests, Miller opens a space for difficult, and necessary, conversations that are often left “withheld.” In the foreword to his collection, Miller writes about a past abusive relationship and reflects on silence as a means of survival. Regarding silence and withholding words, he states, “We keep things to ourselves. We withhold them because of fear. . . . It is hard to trust them to something so unsafe as words. . . . Each of these essays is an act of faith, an attempt to put my trust in words again.”

True to his word, the essays in the collection use words to question and challenge the rhetoric that permeates conversations on race and the body. Spanning the globe and the various places and spaces Miller’s body comes to occupy, his collection examines the silences of living in between and on the margins. As such, each essay overlaps and often centers on his narrative voice—though some essays deviate from first-person narrative for the sake of an omniscient narrator. Beginning with a series of letters to James Baldwin, Miller seeks solace and understanding about “[his] body as black, and [his] body as male, and [his] body as queer,” stating that he does not want to participate in conversations about “racists or classists” but instead wants to uncover the silences regarding how we enable such structures through our own bodies’ “participat[ion].” He then moves on to a series of reflections about incidents when his body was subjected to racist and gendered observations—an Iraqi airport where he is forced to strip naked, and the streets of Erbil where locals requested photographs with him and his “strange body.” In his final letter to Baldwin, Miller states that he resents Baldwin’s task to “write with as much grace and as much love and as much truthfulness.”

In another essay titled “Mr Brown, Mrs White and Ms Black,” Miller explores the various shades of racism perpetuated by both Black and white people—focusing on the intersections of class and how colorism is perpetuated even within the Black community. In “The Boys at the Harbour,” Miller recounts his time with Jamaica’s Gully Queens—a group of gay and transgender homeless teens. While the teens are forced to live on the margins of society due to deeply engrained homophobia and a hypermasculine society, Miller reveals that it is an unspoken truth that cisgender men often seek out the sexual company of the Queens. Yet, given the challenges and hypocrisy that attempt to control their life, Miller points out that the Gully Queens refuse to live silently on the edges; instead, they hold their heads high and fight back against bigotry with pride. These are only a few of the poignant essays in Miller’s work.

Miller concludes the book with one of the most powerful pieces in the collection—a final letter to James Baldwin titled “And This Is How We Die.” In the concluding letter, Miller narrates the recent horrific string of murders committed against Black men and women throughout the world—telling Baldwin “this is how you die” as a Black man. While he withholds the names of the men and women murdered simply for the color of their skin, the details of each murder cue the reader into which person the reflection is about. From Ahmaud Arbery to Breonna Taylor and George Floyd, Miller takes time to breathe life and humanity into each of these individuals—giving them the space to tell their stories. He ends the letter by bringing the theme of his collection full circle: “Every day it is like this in America. And in Trinidad. And in Jamaica. And in this whole world. We write because there are always things we have withheld. We die because things have been withheld from us, which is to say, respect, which is to say, dignity; which is to say love.”

Things I Have Withheld is necessary reading for everyone. Through its unflinching, no-holds-barred honesty to its detailed and intersectional approach to understanding contemporary constructions of race, gender, nationalism, and sexuality—Miller shares his body, his words, as a means of helping us come to terms with the uncomfortable truths that are withheld.