Our Obsidian Tongues by David Shook 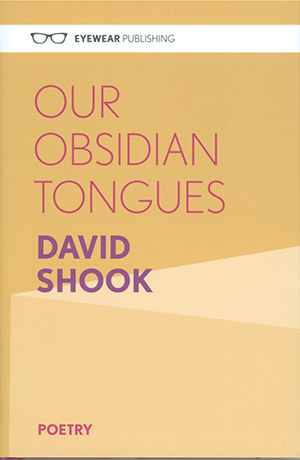 David Shook is quite right that, on the days when you can see them through the pollution, the volcanoes that surround Mexico City are a perfect metaphor for the city’s way of existing at once in the present and in the past. Through their lava, rock, and ash, they symbolize both origin and aftermath, and it is this sense of the city as bubbling life and dying remains that Shook explores in Our Obsidian Tongues. The poems in the collection move fluidly between original work and translations from Spanish and indigenous languages like Zapotec, and the city they circulate shifts too, as we move among butchers, kidnappers, businessmen, mango sellers, and the “celestial bouncers” of the clouds.

And yet, despite its varied cast, what stands out about Shook’s Mexico City is not its voices but its silence. It is not entirely silent, of course—we are never far from the sounds of police helicopters, whining machinery, and shrieking sirens—but it is silent in that nobody speaks. Instead, the various protagonists—kidnappers and their victims, tourists, immigrants living in the United States—write letters, which sometimes mislead or arrive too late and which always go unanswered. Mouths in the book are coated with thrush “like cobwebs over tongues too seldom moved.” Lips and throats do not belong to people but to water cisterns, volcanoes, and valleys: they are parched and dry, with no hope for anything better than the next lot of acid rain. Everything feels left behind, running out or drying up: in this sense, rather than being a celebration of the city’s many voices, Our Obsidian Tongues seems to be a lament for their absence.

This raises questions about how Shook sees himself here, as poet of this dust-covered metropolis and student of its tongues. To have thrown himself with such zeal into this multifaceted project of writing and rewriting, and yet for the results to read so pessimistically, seems strange. What does it mean to produce such fiery, vivid translations and at the same time to scatter them among the ash in a landscape where it seems to be too late—everything too sick, too lifeless—for speech?

Whether or not Our Obsidian Tongues provides the reader with all they need in order to answer these questions (and I am not sure that it does, but neither am I sure that it wants to), it certainly impresses as a brutal, clever, and tautly crafted portrait of a city that deserves no less.