Three Poems from the Alphabet of Empire 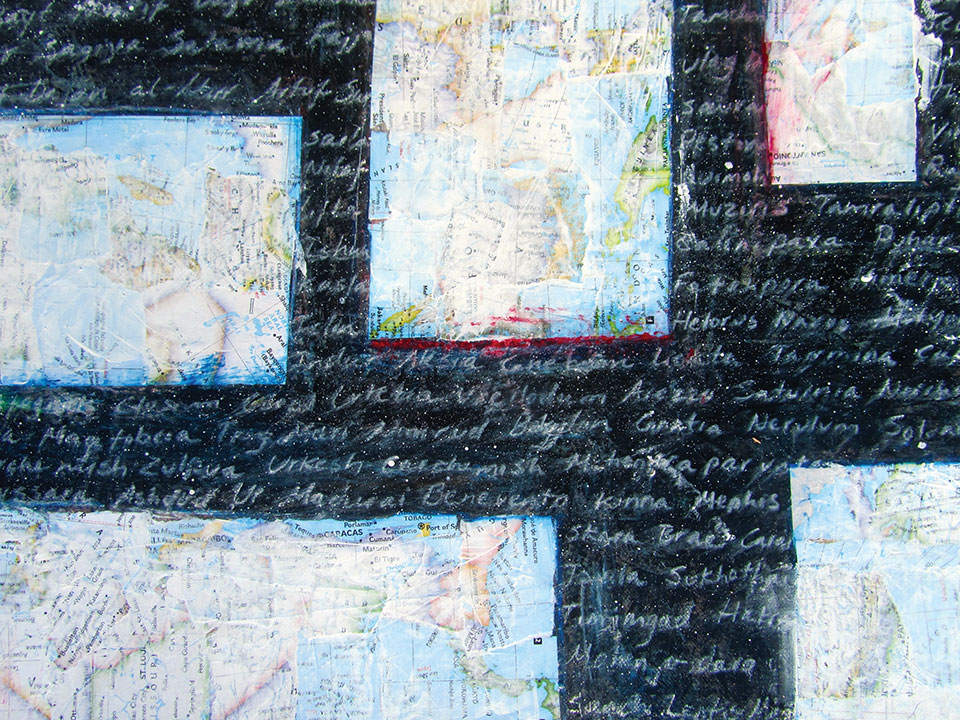 Mona Nicole Sfeir, The Maps of Our Making (detail), 2015, acrylic, chalk, collage on canvas. Political maps are human constructs that have continuously changed since the first maps were scratched onto clay tablets. The painting lists dozens of names of cities that once existed on maps but have vanished due to natural disasters like earthquakes and volcanic eruptions or due to human warfare and destruction. The maps in the paintings are a conglomeration of various political borders and the names are written in chalk, easily erased like the cities themselves.

Author note: The three definitions that serve as epigraphs come from the US Department of Defense’s Dictionary of Military and Associated Terms (October 17, 2007, edition).

Absolute dud — A nuclear weapon which, when launched at or emplaced on a target, fails to explode

Absence of war : dream state be ours [bow our heads]
what is it to pray for a state of failure
to keep the peace as if understanding
the definition of peace
obsolete
.           intransitive verb
.           : to be, become, or keep silent or quiet
the loudness of war following us to the room
down the staircase
into the bunker
dug out with
a spoon.

Heaping the bodies wordlessly into the holes of the earth
and stirring + stirring the soil in their open mouths
the lack of air biting at our bone-weary memories
of a time when this was not the sounds of our lives.

What for the fields of poppies, the strings of poetry
tied around our necks, a prize[1] awarded in monetized
: hope?

Words, stacked, catalogued, buried, and forgotten.
Gods all around [bow our bodies] to their fury
fermenting the earth : we bend hard
but fail to hold our peace
it drops to the earth and sinks
[silently]
[.]

Minefield lane — A marked lane, unmined or cleared of mines, leading through a minefield

through brimstone and fire
to the promised land?

Who sets it forth
then takes it back?

Here is the path
or perhaps not.

Plant the thing that
trips us up

Take our legs so
we may fall and fail.

Then conjure gods
to walk us through.

Very seriously ill or injured — The casualty status of a person whose illness or injury is classified by medical authority to be of such severity that life is imminently endangered. Also called VSII. See also casualty status.

When do you know you are imminently endangered? The dodo egg so fragile yet able to hold an entire species until the last yolk is licked. Dried head and foot housed in the Oxford University Museum of Natural History. Include a name tag for casualty status.

How is it in our hardness we push across the earth/whose? There is a thrust in creating. Yet how thin the skin stretched over the life dividing within. What does it mean to authorize injury and/or death in the name of progress and freedom? Prepare a speech.

A space penned for liberty. Take its temperature. Readings will differ widely. Unarmed + shot [how many?] Here is my tally: where in the world are you standing? Beneath an electronic billboard sink a needle deep into an escape valve. Home/job/coin-less:less:less. Build a wall and continue to bomb.

A species that can hold rape as a weapon of war. Ground zero of our existence is where to place the bomb. Casualty status is not divulged. Where are you waging empire? Examine our democracy and report imminently endangered. Repeat overseas and redact.[4] Access the damage and classify. Then sink to your knees and weep.

[1] The first Nobel Peace Prize was awarded in 1901 to Frédéric Passy and Henry Dunant, founder of the Red Cross. Since 1901, twenty-nine Americans have won the Nobel Peace Prize. During that time, the United States has participated in more than thirty-eight direct armed conflicts, including the Philippines, Cuba, Mexico, Nicaragua, Haiti, Dominican Republic, Tunisia, Japan, Korea, Vietnam, Cambodia, Laos, Thailand, Lebanon, Zaire, Grenada, Panama, Iraq, Somalia, Bosnia, Serbia, Afghanistan, Pakistan, Libya, Syria. Additionally, the US Special Operations Command (SOCOM) has operations in over a hundred countries including Mali, Nigeria, Malaysia, and Algeria. The US Congress has not declared war since 1941.

[2] The pantheon of gods worshipped by humans throughout history numbers in the tens of thousands. To date, the oldest structures attributed to temples of worship are located in Turkey. Göbekli Tepe is estimated to be about eleven thousand years old. In the past century alone, hundreds of new religious movements have sprung up, many of them offshoots of current dominant global religions. The Missionary Church of Kopimism, which was founded in Sweden and given official religious recognition in 2012, is a congregation of file sharers that believe copying information is a sacred virtue. Ctrl+C and Ctrl+V , the common computer shortcut keys for “copy” and “paste,” are considered sacred symbols. Their place of worship is located in cyberspace.

[3] During the 1991 Persian Gulf War, the US scattered 117,634 land mines, mostly from airplanes, in Kuwait and Iraq. UNICEF estimates that there are still 110 million land mines lodged in the ground in 64 countries around the world. The worst affected areas include Afghanistan, Angola, Cambodia, Iraq, and Laos. In 2015 an average of 18 people per day were casualties of land mines, many of them children (US General Accounting Office, “GAO-02-1003: Military Operations: Information on US use of Land Mines in the Persian Gulf War,” September 2002, appendix 1, 8–9).

[4] Kissinger once said, “The illegal we do immediately; the unconstitutional takes a little longer.” Henry A. Kissinger, US Secretary of State and Assistant to the President for National Security Affairs, to Melih Esenbel, Minister of Foreign Affairs of Turkey, Foreign Minister’s Office, Ankara, Turkey, March 10, 1975 (source: WikiLeaks). 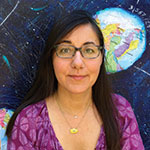 Mona Nicole Sfeir was born in New York City and grew up in five countries. She is both a poet and a visual artist and recently created an installation of fifty panels for the Los Angeles Immigration Law Center. The three poems are part of a manuscript, The Alphabet of Empire, that draws from the US DOD military dictionary and a dictionary from 1898.