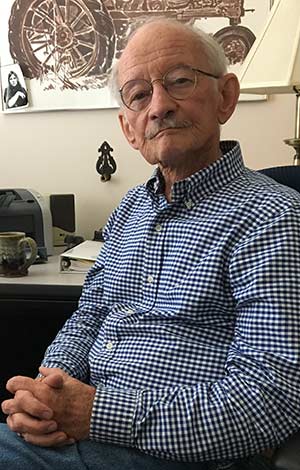 I was on my way home from a party,
ten-thirty, a dark winter night, no stars,
a few snowflakes drifting down over
the arms of my headlights, which were
searching the back of the darkness,
pulling things out, a mailbox, another,
a cat carrying sparklers. At the edge
of a town, I passed four stars, placed
on the untracked snow in a cold old
churchyard. They were of course those
solar-powered lights for marking paths,
though no one walked among them
at that hour. They made up the only
constellation I could see, and though
the dead lay on their backs, and might
have looked up if they wanted to,
their eyes were closed, and not a soul
was finding any meaning in it.

The horizon draws back and draws back
like a dustpan, a pale blue plastic one,
each time leaving a dark line at its edge,
one of those ’30s dust-bowl windbreaks
that haven’t been bulldozed and burned
to make room for more corn. Those plus
a few scattered farms and maybe a town
not yet swept up with the others, lifting
its water tower to show off its name.
As we speed on, in destiny’s direction,
past what’s been left and what’s to leave,
each of those windbreaks sweeps past
and is gone, like the hand of a stopwatch
seen from miles above, all of us racing
against it, a few of us knowing we are.

Ted Kooser was the US Poet Laureate from 2004-2006 and is currently a Presidential Professor at The University of Nebraska, teaching the writing of poetry. He is the author of more than twelve volumes of poetry including his most recent, Splitting an Order (Copper Canyon Press, 2014).