There’ll be no more mother. We’ll have to live now
With the looks on the faces of our friends,
And half-open windows, and lamps that go on
By themselves, and an egg standing on a plate.

Last night I dreamt I entered a house I knew well.
A woman, still single, unmarried, lived there, soon
To be my wife, but living with another man.
She stood by the window, and I chose her once more.

The next day, my brother, not dead at all, and I
Found ourselves in the very spot where
The Rocky Mountains rise straight up out of the plains.
That was all in my dream. Later that night,

I dreamt I had entered a monastery.
Men with tonsured heads stood all around me.
Everywhere there were lamps that go on by themselves.
And my brother was there, not dead at all. 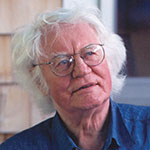 Robert Bly is an internationally recognized poet, translator, and editor. His most recent books include Talking into the Ear of a Donkey (W.W. Norton) and Like the New Moon I Will Live My Life (White Pine). His collected poems are forthcoming from Norton. He lives in Minneapolis with his wife, Ruth.