“52” is the moniker given to an unidentified whale (most likely a blue or fin) whose high-pitched vocalizations, at a frequency of 52hz, are unique among such mammals. Other whales do not respond to his calls, and this has led some to label him “The Loneliest Whale in the World.”

Whether blue or fin or offspring of some uncommon union of each, I hope they never find you – that your song, smoothing its waves across oscilloscope screens from Kodiak Island to California’s fractured coast, is never traced to the swirled wake of your singular breaches. Let the compassionate imagine you lonely, dream of soothing you in their sleek wetsuits and webbed gloves. Let the brokenhearted call you brokenhearted, too. And the ones who don’t fit in, let them ink your slender lines along their biceps, needle your flukes across their backs like flightless wings. But let me conceive you beyond hapless solitude, beyond what’s particular, unrequited, apart. Let me envision you a behemoth beyond betrayal, beyond desire for anything more than the titanic world through which you sail, your shadow longer than the broken-backed wrecks you pass over like some barnacled holy ghost. 52. Not even a name, just the frequency you sing at, a number driven belly deep into your legend like a harpoon fired over the foam-flecked gunwales of a North Pacific whaler. 52. Swallower of messages sealed in bottles. Pack-mule for each grief or joy we make you bear. Monarch of misfits. Psalmist of an unknown tongue. May you drift beyond our seeing when gulls at last descend to lift your flesh in red mouthfuls – weightlessness of water exchanged for weightlessness of air. 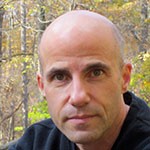 Frank Paino’s poems have appeared in a variety of literary publications, including North American Review, Briar Cliff Review, and Lake Effect. He has received a Pushcart Prize, the Cleveland Arts Prize in Literature, and a 2016 Individual Excellence Award from the Ohio Arts Council. His third book, Obscura, is forthcoming from Orison Books in 2020.