A djeli (commonly known as a griot) is a West African storyteller who is the keeper of oral tradition and village history. The following creative essay, based on the author’s family history, is written to honor speakers, perspectives, and storytelling traditions carried by Black women.

She was in a talking mood that day. The sun was shining through the side window that was covered with dust no one could ever reach. She was sitting in her large, upholstered rocking chair with her tray table, books on tape, and Bible concordance nearby.

“People said to go out to Mohawk Landing when the trouble began. There were people hiding out there. And that’s where she went, until it was over.”

I am known in the family as the historian. The holder of our legacy and secrets in narrative form. This was not a role I knowingly accepted or sought. But it was inevitable as an only child raised by my working mother and retired grandparents, and the youngest grandchild for thirteen years. Outside of school, my playmates were these stories. I would interview my grandparents about their childhoods with a tape recorder. They would play along, mostly in amusement, but also to encourage my “sharp mind.” They would tell me as much as they could remember about their lives in the Deep South and Southwest. Life on the farm, in the fields, in school, or how they were unable to go to school. It all depended on who was speaking at the time. When I would ask about adulthood, they were not as clear on the details. They didn’t remember certain things. As a child, I trusted their forgetfulness. They were “old,” after all. Sixty-plus years to my eight or nine. And even I knew older people started to lose their memories at some point.

It was only later that I found out they were lying.

“So, she went out there and waited. When she came back, her house was still there. They didn’t touch it—”

“And how long was she out there?”

I feel like I have known about Tulsa all my life.

Memories tell us everything and nothing at all. Some days they cannot be trusted. I feel like I have known about Tulsa all my life. I remember when Hannibal Johnson’s Black Wall Street arrived in our house and the conversation about Tulsa that followed. I have always placed this memory along with others I have of being in elementary school and devouring books when I returned home. Yet when the book came out in 1998, I was not a child. I was a semi-adult living on my own and finishing college five states away.

So maybe, that book was not the first I learned about Tulsa at all. Okay. Then, it must have been when I was flipping through The Black Book (1974), edited by Toni Morrison. This scrapbook chronicling Black life over a hundred years or more included triumph, tragedy, violence, and the destruction of Black communities. In later interviews, Morrison even says that she first had the idea for her novel Paradise while editing The Black Book. She came across ephemera in the form of broadsides against the South and newspaper clippings encouraging certain types of Black people to move west and build Black towns in Oklahoma, for example. So, of course the “riot” would have to be in there. This coffee-table book has been in my house since before I was born. I remember being a small child looking at the images of lynched and beaten bodies, ads for hair-care products, caricatures, and also copies of newspaper clippings celebrating Black achievement all in one place. Certainly, then, that is where I first learned about Black Tulsa. However, recently, I checked out a copy of the book from the library and began searching for any of the many mentions of the “race riot” existing in the Black newspapers of the time. It seems the editors included nothing. Strange.

Was it the African American history classes I took in college, then? Or maybe a documentary on TV?

“They say it was the white man who sat on her porch. He must have gotten tired from stirring up all that trouble. He sat down right when the mob passed, and when they saw him they must have thought he owned the house, or he was protecting it for somebody. So they passed it up—”

“But how did she know this?”

“. . . The people who were still around saw it and told her when she got back.”

So, the house was saved by grace or divine providence. When she first told this part of the story, so matter-of-factly, it made me doubt these events. This twist of luck always struck me as mythic and wishful thinking. A bit of magic, or a little “Jesus” inserted into an otherwise bleak narrative. Yet, in 2003, while designing a humanities course entitled “The Black West in History, Literature, and Film,” I included a section on Black Wall Street and the Tulsa Race Riot. While choosing material, I read accounts of employers who stood in front of houses they wanted saved. They protected. Images of a twisted biblical Passover flashed in my mind: the chronic disease, the fire, three days of darkness . . . But, in the absence of lamb’s blood, scores of able-bodied white men flung themselves across the porches and doorways.

Images of a twisted biblical Passover flashed in my mind: the chronic disease, the fire, three days of darkness.

Would that count as benevolence?

“But I had a wonderful childhood and upbringing. I listen to how friends of mine who grew up in Jim Crow talk about all of the problems and how they couldn’t look white people in the eye. We never had to move off the sidewalk when we saw white people coming toward us. We were not bowed down and afraid. At Booker T. Washington [High School], we were always taught our history and to be leaders. You know, one of my classmates, John, turned out to be a great man and well-known professor. Real high up. We have always been very proud of him. He was always so smart. His whole family was. He even skipped a grade—”

She was a child of Greenwood’s renaissance. At seven years old, she moved to Tulsa with what was left of her nuclear family to live with her mother’s sister. She was her favorite. An entrepreneur who was always running something. In 1922 they were all starting over with more determination than before. In an earlier publication I wrote of how transgenerational trauma produced from “knowledge of past racist violence, coupled with witness of present racist violence,” transfers. Yet, her memories defy me at every turn. She made no room for the dead, only the living. Tulsa transferred excellence, pride, and confidence down through her generations. The “riot” was never buried but also not the way she or her community defined its existence. She lived her life unapologetically because of Tulsa, not in spite of.

What does it mean to commemorate acts of racist violence? We piece the scattered parts back together. We honor those who experienced loss. We grieve. We give space to acknowledge, reflect, repair, and repay. Do we remember those who fought back? Those who refused to be broken? Those who stayed to rebuild, or willingly moved in? Is the exercise the same? Do we celebrate as we also recall?

Some thrive and profit off narratives of Black death and destruction. They can only bear witness to suffering and pain yet remain blind to Black resilience, tenacity, or self-sufficiency. That’s okay. They need not perceive these truths.

The keepers do not claim you as righteous stewards.

The keepers do not claim you as righteous stewards.

A century later, I am the one living in Oklahoma. I stand at the crossroads of epics old and new. I carry the yield—tales of five generations harvested from these plains. Though this land does not belong to us, I dutifully bring our stories home.

During the first months of the coronavirus pandemic, going to the grocery store made me nervous. I would steel myself against the unknown and make a mad dash in and out. I knew exactly what I wanted with an eye on the line queue, while calculating how long it would take for me to get out of there and back to the car. But for some reason, not this day. I was looking through the glass case of meat and fish trying to decide how much to spend.

He worked in the store. He wore a smudgy neck gaiter barely clinging to the crease between his upper and lower lip. Every time he spoke it fell down more and he would quickly pull it up, but not far enough to cover his nose, so this routine kept happening. It was tortuous, but I couldn’t look away. He said, “I wear this ’cause they make me (gesturing to the store), but I don’t believe any of it. It’s not real. It’s all a hoax.” His voice was gravelly and rough. He coughed. “You know what? All my life something has been trying to kill me. But it hasn’t.”

As we looked across the meat case at each other, we had that one thing in common.

Yes, we are still here.

“They thought they won, but they didn’t.”—Says she.

Dr. Eaton’s piece also appears in the Spring/Summer 2021 issue of Oklahoma Humanities. To get a free copy of the issue, visit okhumanities.org. 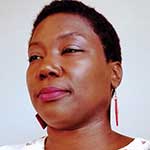 Kalenda Eaton is an associate professor in the Clara Luper Department of African & African American Studies at the University of Oklahoma. Her scholarship focuses on Black women’s narratives, the American West, and historical fiction. Eaton is a Fulbright Scholar and has received funding from the Mellon Foundation, the National Endowment for the Humanities, and the Social Science Research Council to support her research.