Using Bruce Charles Mollison’s How to Prepare for the Collapse of Capitalism as a starting point, Eric Schierloh partially rewrites and expands far beyond it. The idea of “agricultural reform” that appears in this anarchist flattening of the hierarchy of urgency was outlined metaphorically, and only a few days apart, by two of the author’s friends who don’t know each other. For this, he thanks Chilean poet Diego Alfaro Palma and the Argentine letterpress printer stranded in Italy, Federico Cimatti of Prensa La Libertad.

1 Learn to print, not a text but a book, and not just using a home printer. A typewriter, stamps, engraving, silkscreen printing, letterpress, collage; this can all be useful for writing and for the book outside of the industrial publishing system.

1 The industrial publishing system implies, to some degree, a standardization of text (edition) and material for the marketplace, in addition to economic dependency—in the vast majority of cases pitiful and meager and altogether unfair in terms of percentages—both symbolically and instrumentally. Very few writers know how to make a book, and perhaps even far less want to manufacture them.

1 The material diversity of the publications will never be industrial because the very nature of the industry is replication, centralization, and an endless increase of revenue to the detriment of everything else. Meanwhile, your nature as a being inserted into a dynamic system (which includes the biblio-system) is, first of all, diversity. So take that diversity to the text as a writer and to the book as a publisher—ultimately, toward a new art of making books.

1 Allow failure and error to have a place in your procedures.

1 Publishing outside of the industrial publishing system implies printing, layout, designing, collating, and, in some ways, bookbinding. It is the incessant division of professional work, which then wants to see an overexploitation by oneself. Instead it is a series of possibilities to expand the dimensions of the work. In short, it is about getting involved beyond the text (the more the better), in other instances (the more the better), and with new tools (the more, especially of your ownership, the better) for the production of the book.

1 Create a similar link with the diverse set of materials of artisan publishing (papers, cardboards, threads, glue, clothes, etc.), with tools and crafts (printing, design, editing and publishing, bookbinding) to that which is created naturally while writing. Where industry fosters or imposes a division (between writing and publishing, text and book, publishing and manufacturing), there it is necessary to restore or (re)build links that give grounds for a productive and political continuity.

1 Set up a publishing project that transcends self-publication to some degree, in order to shape a community of better interconnected peers and a small, frequently visited community of recognizable individual beings—participants. Join in with the participants and look for ways to dwell in a more complete and committed way in that community. The publishing project is inhabited by artisan publishing, but the community is inhabited, in addition, by the sharing of knowledge, by attending fairs and other kinds of meetings, by discussing and politicizing editing and publishing, and ultimately by collaborating in the most direct and effective way possible with the collapse of the industrial publishing system just as we know it today.

1 Artisan publishing articulates in the workshop: by the praxis of craft, in the spaces of horizontal socialization, within the community of its peers, and by using multiple tools, disciplines, and types of contacts and possibilities. In the face of growing industrialization and the division and specialization of labor—and even its complete split—appear the workshop, craft, and the community as the space and occasion for increasing self-management.

1 Where the industrial book ends, the possibility of the artisan book is born.

Where the industrial book ends, the possibility of the artisan book is born.

1 There is a lot to learn from the practice of disposal, especially from the waste of the industrial publishing system. The garbage can in the publisher’s workshop can also be revealing. Reusing materials must be a concern for two main reasons: first, it is not one for the industry, and second, it is an ever-growing one for the community of artisan publishers and readers alike.

1 Develop practical skills beyond writing such as: creative reading, rewriting and appropriation, translation and versioning, printing using various techniques and materials, designing, drawing, photography, publishing as a criterion, bookbinding, reusing materials, the creation of financial mechanisms and distribution strategies, practicing coexistence in a community of peers, etc. In other words, increase writing. Because that is the natural way toward artisan publishing.

1 Artisan publishing is the publication of texts with the body.

1 One of the pillars of the industrial publishing system is the private property exerted over the text. Allow digital access, untethered circulation of electronic texts, and take ownership of the book.

1 Share and teach your skills. And above all, share and teach what you have learned on your own—starting with the context and conditions that made it possible and necessary for you to teach yourself something. And before entering any college to study a craft, pay Jean-Joseph Jacotot a visit.

1 Join a community of peers where people consume, share, and—when able—produce both individually and collectively (objects, events, situations, ideas, mechanisms, tools, etc.). Artisan publishing is not, of course, exclusively your writing or your artisan publishing house. Artisan publishing is, first and foremost, a collective dynamic that has its own history (long and diverse), which can serve as a brand or guarantee–perhaps much like some parts of the so-called independent publishing community, and as a condition of the deeply biopolitical and micropolitical praxis that deserves to be constantly rethought and updated.

1 Simplify your writing by freeing it from the paraphernalia of the industrial publishing system. It is necessary to gain space and time in order to increase the dimensions and possibilities of writing, toward printing, editing, bookbinding, and the artisan publishing of books and other textual devices. New meanings, feelings, and encounters await, as well as new possibilities for texts, books, readings, and the publisher’s economy.

1 Discover all that can be done with very little: homemade prints, small unforeseen publications, translations that nobody cares about but will certainly matter to some, the reuse and recovery of scrapped materials, the manufacturing of unique copies in short and slow print runs (book-objects), sketches and prototypes, the exchanging of skills and workforces, the manufacturing of tools (from simple punches and folders to complex machines for engraving, drilling, or even printing), etc.

1 Also, distance yourself from the logic of unlimited consumption within a culture industry based on incessant rotation and disappearance, excess publication and destruction, propaganda and the promotion of phenomena. Reread, lend, exchange, sell, give away, even reuse these printed materials in your publishing process. If possible, choose artisan publishing products and writings that are made with more care and in a finer way, that have a higher work density, are made by your peers, by small artisan publishing houses or by independent small-industrial publishers that are openly supportive within the biblio-system that we all inhabit.

1 Exchange output beyond its market value and share the work in its digital format. The cost is almost equal to nothing for both you and the reader. It is also a primary and elementary way of participating in and feeding back into the open-access culture, while giving back a bit of all that we inevitably take from culture.

1 Spreading the artisan publishing knowledge that is acquired and developed in both an independent and collective fashion is useful for bringing “consumers” to the small-scale production domain. This is central in contributing to the collapse of the industrial publishing system. To put our creative strength, ideas, and symbolic capital in the safekeeping and service of what we seek to weaken is dangerously counterproductive.

1 Certain laws specific to the industrial publishing system, which work closely with the design of the culture industry, become blurred and lose part of their meaning—if not completely—when culture is distributed and produced with an artisan standard. Such is the case of the paying public domain (a complete contradiction), or of at least certain intellectual property in relation to its materials, length, and scope.

1 Any recognition at all of an emotional state or condition never has a favorable moment. We are in transition, like a blinking text cursor.

1 Your creativity—always in relation to the content and processes, to the original and synthetic productions, to the materials and the means of circulation—is the system’s limit.

1 The figures, benefits, and advantages of the industrial publishing system are always relative, misleading, or false. And more often than not, they only reflect the privileged reality of a minority or an elite.

1 Faced with the incessant proliferation of fashionable texts, the oligopoly of industrialized publishing, and the hyperconcentrated market of global tendency, only the agricultural reform of writing remains. Take this literally. Because collapse conveys a global and complete plummet.

0 Once a certain point is reached, “there is no possible return.” This is the goal to reach.

Read Holzman’s interview with Schierloh exclusive to the digital edition of this issue. 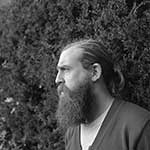 Eric Schierloh was born in Buenos Aires in 1981. He is a writer, translator, and artisan publisher. He runs Barba de Abejas, a small artisan publishing house and letterpress workshop.