moonshine & melanin the news on the street.
daddy chandler & one officer dead & young
claude jailed with alleged murder on his shirt.
the christian sabbath a buzzing lynching bee

to return the next sweltering midday without
him, his body rotting meat ten miles from okc
beaten & shot. miss ida had had enough.
her lewis gone years now, she frets when ralph

businesses, elegant houses, hospitals. vibrant
black life in the face of jim crow, so unlike
the deuce. closer to the harlem ralph would know.
gary was not negro paradise. ida jobless, the boys

eating garbage from trash cans. okc was hateful
but at least familiar. dry heat stings black skin
irritable but somehow bearable with family.
highway leads them back to tulsa before 2nd street. 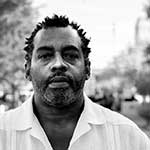 The author of twenty books of poetry, nonfiction, and children’s literature, Quraysh Ali Lansana is currently a Tulsa Artist Fellow as well as writer in residence, adjunct professor, and acting director of the Center for Truth, Racial Healing & Transformation at Oklahoma State University–Tulsa. He is executive producer of KOSU radio’s Focus: Black Oklahoma, and his forthcoming titles include Those Who Stayed: Life in 1921 Tulsa after the Massacre. He is a member of Tri-City Collective.