The Storefronts Wore Their Names

Lord, he was born a pesky question. Know
he always wore the danger hour of dusk.
The white folks named his skin impossible.
He teetered, balanced on the Negro inch
of sidewalks, dressed in hues of chance and mud,
eyes straight ahead, while trying to recall
the gospels that were conjured just for him:
Unsee the white men that you see, demand
yourself upright. Your name is Rowland, give
it bellow. But in other mouths, that name
would slog through spittle, wrap its hateful hands
around his neck. He barely found the breath
to ask what was so terrible in him.
Their answer had to be some form of fire.

The answer’s bound to be some form of fire,
perhaps a blinding spew of blood, a tree
with shadowed arms that stiffen for the hang.
They sweat the need to disappear a thing,
to unbelieve in, unbecome a thing,
to call a man or boy a thing, to kill
all that he is until he’s less than that.
The white man loves to torch a thing,
to torch a landscape flat, to turn it to
mistake and then deny it ever was.
They hate by hating most the things
they’ve made to disappear, and then
what they still see—the way he walked, unleashed,
his stride, too loud, too Negro, riding flow

just like some Negroes stride, in overflow,
as if he were a man and white, he had
to realize how sharp the anger bloomed
inside their chests, and then—he touched the girl,
he ruined her sterling skin with his, they screeched
He touched the girl!, and if he did or not,
he did. And “touch,” of course, meant he
had scraped her with his crave, he bit
and lapped and penetrated, he drew blood
and moan, he left that nigger sound on her,
a wail she’d always wear. He touched her. So
his rawboned throat was measured for the noose,
and white men gathered for his disappear,
their tangled voices rising like a pyre.

Entitled voices tangled in a choir
of loathing, bloated blue, its keyless shard
of song a bitter spitting of his name
again and yet again—he’d shortened it
to Diamond Dick, and yes, they were afraid
that might be right, afraid Miss Sarah Page
would fret and fever-flail, not wanting to
forget him happening to her. They named
him beast, and startled at the way that he
succumbed to cuffing—upright, bristling,
knowing his people just enough to know
they wouldn’t let him swing, they wouldn’t let
him disappear, his body left to those
who’d sing their privilege in place of dirge.

They warbled privilege because their days
were filled with nothing but deciding how
best to dispose of Diamond Dick, his blunt
and brutish fingers still an awkward source
of agitation for Miss Sarah Page,
who some folks thought might not recover from
that touch, or what she’d dreamed as touch. But they
had no real knowledge of the family
of Negroes, viscous as the stubborn blood
of Negroes, men who’d lay their own lives down
so he could live. He sensed their rumbling march
toward him, determined men who knew the sun
rose high on every man, so every man
deserved some sun. The homes, the offices,

were theirs to own. The storefronts wore their names.
And yes, they’d gathered, minds set on that boy,
not knowing if their numbers were enough
to save him from the rope, but needing to
be there, to say, We’re here, to pull that boy
inside the widening circle of their arms,
to meet the menace in his jailers’ glare
with menace of their own. And as they marched
in their unsettled silence, hefting sticks
and guns, their path ahead began to swell
with rancor, venom blurred the way, and soon
those bladed sounds for black rained down, that spit
in lieu of Christian names. The crackling in
the crowd, the screech of hate and all its ways

aloud. The blacks clawed thru the toxic maze
of crowing, snarling throngs, that sea of white
the jail so close. And then—it could have been
most anything, so many things can make
“upstanding” men become the monsters that
they are—a numbing shove, a rifle wrenched
away, the flinging of a barb that names
a man much less than what he is, the gall
of those who will not lower their eyes or step
aside, so many things can make a man
decide on blood, to answer questions no
one’s asked with every form of fire. The boy
forgotten as that savage specter stalked
the Greenwood streets. White men, taking aim.

In Greenwood, so assured and laying claim
to everything a black man’s hands had built,
the chosen ones obliterated all
the crooked triumphs, those unscrupulous
successes, lives that coloreds had been fool
enough to think were theirs to flaunt and mark
with their tenacious stain. A fever, dank,
relentless just below the skin, had wrapped
the white men in its blister. So they were
inclined to kill it all, to blast the breath
even from things that never lived. Their howl
was feral, and their hatred blind. The god
in them set out to touch their sacred flame
to everything they set their eyes upon.

In everything he set his eyes upon—
the riddled bench, the wretched rusting bars—
the boy saw shudder. And the windows cried
of endings. He had touched a white girl—he
had grabbed her arm to keep from falling, but
had gone and really touched the girl—and now
the much-debated sacrifice of his
one Negro body and its only neck
would never be enough. Even the air
was frantic soldier, slapping blue aside
to spew its heat. He heard the bullets
as they wounded wood in search of pulse.
He smelled the stigma in the brick, the ruin
of every shelter they had built and blessed.

They built the blessed shelters and the banks
and busy offices, the barbershops,
the millinery with its smart chapeaux
and silken crowns for Sunday service, plus
the churches, where the congregations prayed
their shelters would be built and duly blessed,
the schools where children learned to write
their names, the shop where bolts of cloth
were cut for dresses, kitchens turned into
salons, that stink of flowery pomade
and burning hair. That place where music rose…
without a source or reason, mingling
with voices ’til the sky itself was song,
their tribulations waning with the dawn.

Their tribulations waned with every dawn
until the white man, so intent upon
his quaint possessions, rose to claim his dawn
again. He rose to claim his sky, his cloth
and nails, his wood, his bolts of silk, his shears
and pressing comb his many books and pens,
the market and its crooked stairs, he claimed
the women, then the men, and then the black
in all their mirrors, then their mirrors.
And Greenwood, glorified and built in search
of blessing, disappeared—gone was its whole
assembled soul, and all those loud black hands
were silenced, still. And were just hands again.
Were silenced, still. And were just hands again.

The men were silent, women still, amazed
and quieted beneath the dust from their
dismembered homes. Their shadowed skin
was still their own, just bulleted and brown,
no longer interesting, all that was left
was Negro, just the simple mud of it,
no lush brocade, chapeaux, or bank accounts,
no, just the haughty scraps of wreckage,
that slaver bobbing in the distance, perhaps
a snippet of a chain. There, someone’s hand.
A heart rifled to gone. Blood gumming up
the soles of one man ambling, weeping.
His only path had crumbled and collapsed.
White man keep beatin’ on that killin’ drum.

They just keep pounding on that killing drum.
Inside his cell, Dick Rowland wondered if
his skin against her skin, that second of
mistake, was all it took to end the world.
He heard the fading roar of colored men,
the horrifying sound of pleas with God
that ended in a panicked psalm. He heard
the frantic one-note squall of children, and
the women—Jesus, Jesus, Jesus. But…
he didn’t hear one white man’s voice, not one—
perhaps they’d died of too much carnage or
believed that they were God again. If so,
their craven clemency would save his life.
When you are born a question, you just know.

Whenever you are born a question, know
the answer’s bound to be some form of fire.
Oh, how those Negroes strode, in overflow,
entitled, voices tangling in a choir
that warbled privilege as if their days
were theirs. The storefronts wore their names
aloud. They ambled thru the twinkling maze
of Greenwood, assured and laying claim
to everything they set their eyes upon,
to all the shelters they had built and blessed
their tribulations waning with the dawn,
its silence, its still-rising. They found rest.
White folks kept beating on that killing drum,
too blind to know the hearts of those to come. 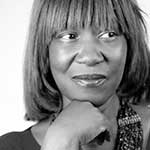 Patricia Smith is the author of eight books of poetry, including Incendiary Art, winner of the 2018 Kingsley Tufts Award and finalist for the 2018 Pulitzer Prize; Shoulda Been Jimi Savannah, winner of the Lenore Marshall Prize from the Academy of American Poets; and Blood Dazzler, a National Book Award finalist. She is a Guggenheim fellow; an NEA grant recipient; a former fellow at Civitella Ranieri, Yaddo, and MacDowell; a professor in the MFA program at Sierra Nevada College; and a distinguished professor for the City University of New York. She was also a nominee for the 2018 Neustadt Prize.