for Juan José Hurtado, in memoriam

For the narrator of the following crónica, 16mm films made by Kaqchikel villagers, flying ants, and dragonflies all flicker in the historical shadows of a ruined amphitheater that, in the Guatemala of the 1970s, “ceased to exist.”

He handed me a torch of burning ocote. Hold it up like this, he said, showing me how with his own. Then I received from him an ancient clay tinaja. I liked the feel of the cold damp earth in my hand, as if I were holding a piece of the past, of a time more diaphanous and primitive and painted in shades of ochre. Let’s see if we get lucky and one of them falls, he said. We began to walk slowly through the now empty and dark streets of San Juan Sacatepéquez.

I thought I felt a soft drizzle on my face. Although it could have also been nothing more than the evening mist. Or my nerves. We passed the vacant lot where I had left my car. We passed some market stalls around the central plaza, already closed and covered with black and blue plastic tarps. We passed a cantina that was probably a brothel. We passed a bundle of green bananas lying in the middle of the street. We passed a row of crumbling houses, and I remembered the earthquake of 1976. We passed a small bridge that crossed a black and rancid creek. We passed by a large piece of land full of apple trees and something that in the night looked to me like a grandstand descending to a small stage. Like an amphitheater in ruins—like the bleachers of an amphitheater in ruins. I asked Ramón what it was, and he stopped and told me it had been a movie theater. But years ago, he said. When I was young.

As a young man he had seen there movies of Cantinflas and of Pedro Infante and some cowboy movies.

I looked down at the amphitheater among the apple trees (I smelled or thought I smelled the apple trees in the night). I noticed that the bleachers were overgrown, abandoned, useless, and I suddenly imagined all the indigenous people of San Juan Sacatepéquez sitting there as they watched the short, blurry, sixteen-millimeter films in Kaqchikel, made by themselves. I asked Ramón what had happened to the movie theater. Oh, he said, it ceased to exist. And his voice hurried to hide in the night.

But it wasn’t difficult for me to guess the rest of the story, to guess why something like that could not exist (to use his word) in the Guatemala of the seventies. I asked Ramón what the short films had been like, if he remembered any of them. But he just threw away his cigarette, crushed it into the ground with his black rubber boot, and kept walking.

Soon, almost without realizing it, we had left the outskirts of the village. We kept moving forward and reached a trail and began to walk among old oak trees, up the mountain. The ground was muddy and slippery. I looked back fleetingly. The entire village had disappeared.

After a while we stopped to rest, and I asked Ramón in a whisper (as if my voice might scare them away) if he had seen any already. Not one, he said. They haven’t come out. Not as many come out as before, he said, and spat a long slimy drool to the ground.

He was silent for a moment, panting lightly, as he tucked the hem of his pants into the big black rubber boots.

The zompopos de mayo would fall from the sky, he said with the momentousness of a preacher.

Before, when I was a boy, he said, as soon as the first rains came in May, we would go up the mountain with my father and catch zompopos de mayo. They would fall from the sky, he said with the momentousness of a preacher. Imagine that. They would just fall from the sky and fly toward the flames of the ocote, and with my father we would pick them up from the ground and put them in our tinajas. There wasn’t enough room for so many in our tinajas. Then we would return to the house and my mother would throw them all into a basin full of water, to wash them before removing their wings and legs and heads, since one only eats the small round body of a zompopo. She would then put the round bodies on the comal and toast them with a pinch of salt. I thought I saw Ramón smile in the amber light. Very tasty, he said. Only for special occasions.

We continued through the forest in silence, me slipping a little in the mud with each step, waiting for the zompopos to fall from the sky and fly into the flames of my torch. I wanted to see them, to catch them, to savor for the first time that tasty and salty and crunchy snack reserved only for special occasions.

We reached the top of the mountain. Ramon, crouching, his gaze sleepy or resigned, was silent. I thought about telling him not to worry, that I understood that the sky had already been emptied of zompopos (I would have to wait a few years before finally tasting one, on a not very special occasion, inside a nameless dining room on the shore of Lake Amatitlán). But I just asked him for another cigarette. And we both waited hopelessly as we smoked in the minty muffle of the night, our torches by now barely lit, our ancient clay tinajas almost forgotten on the ground.

There was a short film about the cat technique, Ramón said. That’s what the doctors from the city called it, the cat technique. I again felt a gentle drizzle on my face. The only light came from the glow of the embers of our ocotes. On the screen there was a man walking through the forest, said Ramón’s voice in the night. The man then pulled down his pants and squatted right there in the forest and relieved himself next to a nearby bush. Then the man’s fingers appeared on the screen throwing dirt on his droppings, covering them with dirt using his fingers. Ramón made a brief pause, necessary to smoke or maybe to overcome his modesty. And a voice in Kaqchikel said that one had to do as a cat does.

Editorial note: “Highland Maya civilians [in Guatemala] were the victims of a thirty-six-year civil war in which 900,000 of them were displaced from their lands, many of them becoming refugees in Mexico, Belize, and the United States, and another 166,000 were killed or ‘disappeared.’ By the time a cease-fire was declared in 1996, the Maya constituted 83 percent of the war dead. A United Nations study stated that Guatemala’s war policies had been tantamount to Maya genocide.”—Lynn V. Foster, Handbook to Life in the Ancient Maya World (2002) 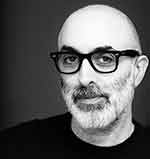 Neustadt Prize nominee Eduardo Halfon is the author of fifteen books of fiction published in Spanish. Mourning (2018) received the Edward Lewis Wallant Award (US), the International Latino Book Award (US), the Prix du Meilleur Livre Étranger (France), and the Premio de las Librerías de Navarra (Spain). In 2018 he was awarded the Guatemalan National Prize in Literature, his country’s highest literary honor. His newest book in English, Canción, is forthcoming in September from Bellevue Literary Press. Photo by Ferrante Ferranti