Niillas Holmberg’s collection Juolgevuođđu, co-translated by Jennifer Kwon Dobbs and Johanna Domokos and forthcoming in fall 2022 as Underfoot (White Pine Press), will be the first single-authored book by a Sámi poet published by a US press. Here, the translators reflect on how the book-as-drum “reverberates across its legal, linguistic, lyrical, philosophical, and scientific facets.”

Descending from the yoik, Europe’s oldest indigenous oral tradition, contemporary Sámi poetry gained global renown in the 1980s with the publication of author and Indigenous rights activist Nils-Aslak Valkeapää’s Beaivi, Áhčážan (1988), awarded the Nordic Council Literature Prize and later translated into English as The Sun, My Father (1997). In the twenty-first century, a prominent heir to Valkeapää’s legacy is the musician, novelist, poet, and scriptwriter Niillas Holmberg.

Born in Ohcejohka (Utsjoki) in Sápmi, Holmberg writes in his mother tongue of Northern Sámi and Finnish and performs also in English. He debuted as an author at the age of seventeen and has written six award-winning collections of poetry and a novel. At the heart of his work is the question, How can we restore humanity’s intimate relationship with the earth by reimagining starting points that have led to its exploitation and plunder?

One starting point is language. In Juolgevuoððu, Holmberg writes:

Time to return to the feet.
Underfoot there’s a drum
skin carved with human letters

Comprised of five cycles that read as a long symphonic poem, Juolgevuoððu intervenes in Nordic colonialism represented as a shoemaker, whose assimilating technology instills shame and self-loathing in the Sámi, who symbolically are forced to cover their bare feet, cutting off physical contact with their native lands. “To return to the feet” is to cast off that technology, that shoe of forgetting, and to touch the earth again. Its indentions on the foot’s sole are human letters carved into a drum/skin. This instrument, created by a renewed understanding of Sámi self-determination, collapses divisions between the human and nature and arbitrary distinctions among ceremony, language, movement, and music.

This artistic orientation enables Holmberg to ask in a juridical sense about land rights as an existential matter.

The book is a drum; the page is the drum’s membrane; and the poems—written in Northern Sámi, a language spoken by almost twenty thousand people—the continuous present tense and forward motion of a resilient people unified with the earth. This artistic orientation enables Holmberg to ask in a juridical sense about land rights as an existential matter—to be or not to be—and to widen his gaze beyond oppositional parties deadlocked at the negotiating table. Dogs wander away from herds, leaving the reindeer unattended; relatives turn on one another, transforming into wolves. A grandmother rocks in a chair toward otherworldly shores. Alongside this silent matriarch, terns appear, denoting both an arctic species of bird and a new generation of Sámi activists; children still being born, whose ears resemble leaves; birches illuminated by the lightning of memory and incubating questions.

Co-translating Juolgevuoððu required honoring the poems’ orality while carefully listening to how the book-as-drum reverberates across its legal, linguistic, lyrical, philosophical, and scientific facets. Far-reaching and innovative, the book’s ordinary language and subtlety intensify its power to manifest self-determined futures, expanding Sámi grammar’s possibilities despite its lack of a future verb tense. In “A matriarch” from Juolgevuoððu, featured here, Holmberg gently responds to the need for intergenerational continuity, enfigured as a grandmother rising to rest and the poet remaining by the fire that she tended. Ignoring his request for a story about the past, she gives him the steady rocking of her chair as a vessel and the moment to make his own. Warmed by the boat, his inheritance, Holmberg transports us all with the revelation: “god is a verb.”

A Poem by Niillas Holmberg

A matriarch
gently sways in a rocking chair
creaking like an oarlock.

She knows what she’s doing—with each stroke
the boat floats closer, closer . . .

I ask for a story, but she’s weary
and retires like the night mist
rising off the river.

I tend to the fire and sit in the chair
the boat warms me, god
is a verb. 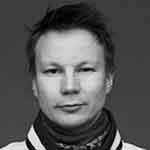 Niillas Holmberg is a Sámi poet, novelist, scriptwriter, and musician. Translated into several languages, he has published a novel and six books of poetry, won such prizes as the Kirsi Kunnas Poetry Award, and has been nominated twice for the Nordic Council Literature Prize. His debut novel, Halla Helle, is a Runeberg Prize nominee in Finland. Known as an upfront spokesman for Indigenous rights to self-determination, Holmberg has been involved in several movements against extractivism in Sámi areas. He lives in Ohcejohka, Sámiland. 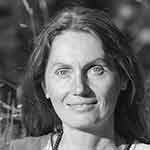 Johanna Domokos is a poet, translator, and editor (hochroth Bielefeld, translingual and performative series) and has been an international promoter of the Sámi literary field for more than two decades. 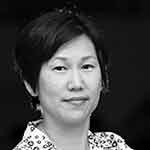 Jennifer Kwon Dobbs is a poet, editor, and translator. Interrogation Room (White Pine Press) is her most recent book. The senior poetry editor at AGNI, she teaches at St. Olaf College.