Looking for Dragon Smoke: Essays on Poetry by Robert Bly 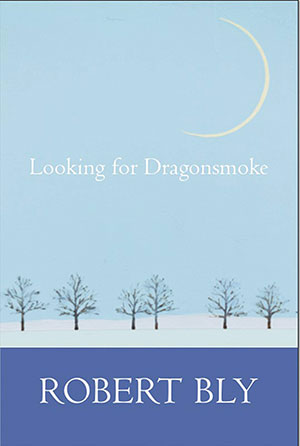 At age ninety-two, Robert Bly is releasing simultaneously his Collected Poems and his collected essays, Looking for Dragon Smoke, which would be ominous if not for the sheer abundance of his life’s work. In the latter volume, we have his sixteen most important essays, written from 1977 to 2005, though mostly in the 1980s and 1990s. The book is divided into four sections, but the essays really fall into only two categories: essays on poetry and poetics and essays on specific writers, mostly poets.

The best of the discussions about writers are probably the ones on Rilke, Machado, and Thoreau. In these, Bly goes beyond demonstrating the application of his poetics to the work in question, which is interesting in itself and which often tells us as much or more about Bly as it does about the work. In these three best essays, he includes a greater mix of pertinent biographical data, wide reading, and philosophical exploration. For example, in the discussion of Thoreau, we may on the same page encounter observations by Coleridge and Melville, a relevant quotation from Descartes, an excerpt from Thoreau’s journal, and a philosophical offering of Bly’s own, such as the following: “Since the physical world conceals or embodies a spiritual world, if one studies facts in nature, one might be able to deduce or distill from many physical facts a spiritual fact.” The effect is to draw the reader into Bly’s own complex understanding alternately with facts, observations, and disputable assertions. Readers may not always agree with Bly, but they are likely to be engaged by him.

The title of this book (also the title of its second essay) draws from the ancient Chinese image of poets as riding dragons, trailing smoke. Looking for evidence of this smoke, which is a sign of poetic authenticity and power, is Bly’s ongoing stated purpose and the thread that stitches these disparate essays together. Appropriately, Bly begins with his essay “Six Disciplines That Intensify Poetry” and enumerates six areas for discussion, areas he calls delight in metaphor, friendships between sounds, psychic weight, natural form, poetic excess, and heart speech. What he means by these things takes him thirty-five pages to explain in his own idiosyncratic way of viewing poetry, which is an admixture of the universal and the partisan. His sheer intelligence and uniqueness make him worth reading, but as he seeks to explain and defend his views, he sometimes doesn’t seem aware of the vulnerability of his assumptions, stated as facts. For example, while casting a disapproving eye on certain formal poets of the 1950s, he describes their use of metrical lines and end-rhyme as machinelike, which then allows him to conflate poetic form with social form and the politics of the era, not conscious, seemingly, of the excess of the 1960s (his own formation time) and its excess as a reaction to the hysterical conformity of the 1950s, which itself was a reaction to the chaos and total breakdown in world order of the 1940s. Effective poetic form evolves from the qualities of the language and our brains’ needs and preferences in processing information, a topic too involved to develop here.

A more egregious example is found in Bly’s essay “A Wrong Turning in American Poetry,” which is generally interesting and well developed in a successive comparison of “good” and “bad” verse. In it, he quotes five lines from Elizabeth Bishop’s “At the Fishhouses” as bad poetry, stating, “The facts of the outer world push out the imagination and occupy the poem themselves. The lines become inflexible. The poem becomes heavy and stolid, like a toad that has eaten ball bearings.” Bly seems to completely miss and misunderstand Bishop’s use of image, which is stunning for a poet of Bly’s renown. Bishop’s work, nowhere better than in this poem, is most perfectly realized when she locates those images that stand as the literal and metaphorical simultaneously, the physical and the metaphysical simultaneously. To read Bishop’s poetry is to read bilingually simultaneously.

Fortunately, Bly’s contentious style seldom disappoints to this extent. Instead, it mostly delights in nearly three hundred pages as we witness an original talent work to explain and demonstrate a new world, the world according to Bly. Isn’t this in some way what all great talents do?