BIRDS CHIRP AND MIGRATE. Rivers flow. People die. Snow falls. Many people know about the Buddhist notion of reincarnation. None of these singular things is strange to us. But when these things are incorporated into one enactment, they turn into a work of art—a poem. This is what Japanese poet Shuri Kido is doing in “Wandering Birds.”

Since humans acquired command of language, we learned to compare one thing to another, that is to say, metaphor. Long before Aristotle elucidated what metaphor meant, rivers had been compared to the passing of time or life. When Shuri Kido writes, “Sticking your hand into the flow / you cleave the stream into two, / and both come clear as life and death,” he is indicating that life and death happen in the stream of time, which flows in one direction. At first glance, the lines quoted seem to suggest that Kido is cleaving to a chronological time-flow. But a river, though it may flow in one direction, erodes the land and creates strata that are themselves an accumulation of time. We can see what happened millions of years ago on the strata right before our eyes. Accordingly, if one man’s life is metaphorized in the time/river flow, many other people’s lives and deaths are recorded in the strata, still apparent in the present tense. This is one of the things William Carlos Williams was focused on in his monumental work Paterson: he was digging up the hidden history (or histories) deposited along the flowing Passaic River. In this respect, Kido is working toward something similar to Williams, grasping the world with his “geographical imagination.”

The very first line of the poem is the proclamation of such a notion: “A thousand countries in myself.” While it’s literally impossible, of course, to contain multiple countries, the poet can look at the strata along a river, so the idea becomes possible since history shows itself there in the present tense as an accumulation, not the passing, of time. Kido goes on to write such illogical (at first take) but perfectly logical assertions regarding the time in which he is writing, even as “People die, / just as the dead die, / and then, those who died twice / die three times, / and they seem to fill ‘afterdeath.’” In the synchronic time-flow (or in his geographical imagination), death is not a one-way destination of one person’s life. You see the record of many deaths (a metaphor of history) in the strata alongside the riverflow. Interestingly, this geographical imagination, in this poet’s work, overlaps with the Buddhist idea of reincarnation, where reality is considered to be “the floating world,” the literal translation of Ukiyo, as in the lines “Is everything just an image, / or is this only a wasteland where images overflow, / and become a language?” And the medium to link these two worlds is, of course, language, and poetry in particular.

Living in the reality of synchronic time is only one mode of experience, but our poet never forgets the other: chronological time-flow. The lines “Around here, / when you ask the name of a tree, / ‘It’s a tree’ is what you’ll hear. / Yes, that is a tree. / Yes, that is a mountain. / Yes, and this is water” remind us of the famous phrase from Ludwig Wittgenstein, “The propositions of logic are tautologies,” or Gertrude Stein’s “A rose is a rose is a rose is a rose.” Reality is simply what it is, and nothing more, words from everyday people. In this poem, Kido is trying to unite these two different worlds.

And what of the title, “Wandering Birds”? Aren’t we all “wandering birds” going back and forth between synchronic and chronological time signatures? 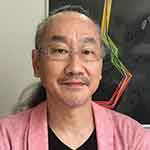 Tomoyuki Endo is an assistant professor at Wako University in Tokyo and co-translator, with Forrest Gander, of Shuri Kido’s forthcoming book of poems, Names and Rivers.