ANDREA TOMPA’S WORK, as a theater critic and public intellectual, has been an inspiration for me for years, and I am delighted to bring her most recent fiction to the attention of an English-speaking readership. Tompa is one of the leading voices in contemporary Hungarian literature, whose translation into English is well overdue. With the exception of The Hangman’s House (trans. Bernard Adams, forthcoming from Seagull Books), the translation of Tompa’s Omerta and Fejtől s lábtól (Top to tail) has been hindered by the difficulties of rendering her highly idiomatic style involving dialect and complex shifts of register.

Tompa’s fourth novel, Haza (Home), has the potential to be successful in English, both in terms of subject matter and style: written from the perspective of a central narrator, it addresses the complexities of identity and engages with writing across borders and diverse possibilities for belonging. It is a story of migration and in-betweenness, elegantly filtered through personal and cultural memory. Contemplating the ease of departure versus the near-impossibility of arrival, the novel’s protagonist—an unnamed middle-aged writer—finds themselves taking stock of their life when returning—to attend a class reunion—to their city of birth. It turns out that switching countries is the easy part: switching languages is an altogether different proposition, and the ultimate challenge is trying to ascertain the boundaries between homeland and home. Is home a universe built in the course of one’s adult life or the place where one was born, and which, though left behind, cannot be abandoned altogether?

Tompa rejoices in the possibilities offered by the Hungarian language to write without the need to pin down the protagonists’ gender, and since she does not always name them, the challenges of finding solutions for this ambivalence in English is significant. It is only halfway through the book that we find an indication regarding the gender of the central character, but provocations continue to persist when rendering the stories shared by other figures, who only appear fleetingly. In several instances, the gender of these protagonists is not directly relevant to their stories, therefore Tompa withholding this information is not an instance of titillating the reader but simply an act of authorial minimalism. When translating into English, however, in the absence of a neutral singular pronoun, a decision has to be taken. Close detective work surveying intimations in other parts of the book may come in handy; other times it is simply a matter of drawing conclusions from contextual clues. In this excerpt, I opted for the masculine in the case of Dr. Rostam, not so much because football associations still connote masculinity in a Hungarian context but because Tompa uses the term doktor (as opposed to the still widely encountered feminine form of doktornő). When deciding on the feminine for the dentist’s patient, I relied on the overall context of the book in addition to picking up hints such as “own sentences” and “new homeland,” and thus concluded that Tompa means the central protagonist.

Throughout the novel, Tompa references Russian émigré writers and the myth of Odysseus, in a preoccupation with the notion of home and foreignness, and with the role of the mother tongue and that of acquired languages. To this effect, the Hungarian text embeds a range of literary citations and phrases in Russian and English; meanwhile, there are no specific clues as to the geographical location of this home and only slight indications of the protagonists’ gender. These authorial decisions invite particularly close attention from translators but, more importantly, signal the fact that home is not an actual place first and foremost but a braiding of situations, objects, and recollections, which cannot be specified because it may no longer exist in the way in which it was committed to memory. 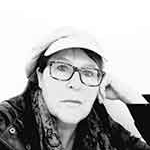 Jozefina Komporaly lectures at the University of the Arts London and translates from Romanian and Hungarian into English. She has translated the work of Matéi Visniec, András Visky, and László F. Földényi for Seagull Books and published widely on theater and adaptation. Her translations have been staged in London and Chicago.