Giving Voice to Words: Translation as Collective Transformation in Zoque

For Indigenous writers like Zoque poet and activist Mikeas Sánchez, language serves as a unifying element in the struggle to defend lands and life. This essay’s title can be expressed in Zoque as “Nhtyajk nhwiruja’ mpyämi tzame’is’nyi’eram: Te’ jaye’ wäkä mpyarä’ nhtyi’uk Ore’is,” which, the author explains, translates more specifically as “Giving Words Their Force Back: Translation as the Path in Zoque.”

In my language, Zoque, poetry is present in our most solemn rituals, such as the call for rain, dances to ask for abundant harvests, prayers to the mountains, and to heal the sick. We also make use of poetry in our community’s most important moments: births, marriage proposals, weddings, and funerals. The Zoque language holds our essential, ancestral knowledge of cuisine, medicine, oral tradition, and community practices.

My paternal grandfather was a well-known curandero or healer. He inherited the gift of poetic language and used it in his traditional medicine. Zoque poetry comes from this soul-healing song. Illnesses manifest in our physical bodies, but their origin is spiritual. People often fall ill from espanto (shock), sadness, fear, hatred, or shame. To cure children suffering from espanto, for example, we identify the specific location where the soul left their body, take them back to that place, and gently beat their feet with sprigs of cocohuite (San José flower) and basil. As the family walks with the child suffering from espanto, they recite a prayer, speaking to the soul and imploring it to return to the body.

I learned about poetry through these healing practices. My grandfather didn’t teach me deliberately, but neither did he hide it from me, so I memorized some of the verses. The healing chants and the prayers to the mountains have the same rhythm and musicality. Only later did I connect these chants to poetry on the page.

Creating bilingual poetry, in both Zoque and Spanish, has been challenging because I am an autodidact—as are most of the Indigenous writers in Abya Yala. I learned the grammar of my Native language through my writing practice, not through my schooling. I began writing bilingually in Zoque and Spanish in 2003; since then, I have published six books. Each of those six is different in its grammatical usage of Zoque because, during those years, changes in spelling, even changes in linguistic conventions, occurred. I have adapted because I want my language to be heard, to be embodied in literature.

In Mexico, there still isn’t literacy in Indigenous languages. This is a problem for minoritized languages like Zoque. The number of speakers is fewer and fewer as these languages are displaced by Spanish, the hegemonic language. The Mexican state has not defined a comprehensive policy requiring literacy education of all children in the languages of their grandparents. At the same time, online social networks and other digital platforms force language displacement toward Spanish or English. Writing is a way of positioning a minoritized language to be recognized by its own speakers, rather than waiting for acknowledgment from the nation-state through laws and institutions.

Our Zoque writing goes beyond the straightforward concept of single authorship, toward recognizing the community as guardians of collective wisdom. A single author may garner prestige and even fame, but how does the author’s community benefit? When the community feels not only represented but also an active part of the writing, there is recognition of both individual potential and collective, oral tradition.

When we detach ourselves from individuality, we can aspire to collectivity. In this collectivity is the tremendous chorus of nature and the dream that seems to be our own but that, in fact, affects the entire community. Listening with the heart is essential in this era of individualism, in which we seem to listen only to ourselves—an endless echo that deafens us. Listening with the heart also means listening to the trees, to the river, to the ants, and to the cicadas—all of whom have their own voices.

I am from an agricultural village established more than three thousand years ago in the territory inhabited by the ancient Olmec people—the oldest culture of Mesoamerica. My village is located in a special place: the headwaters of a watershed. It rains nearly year-round, which sustains abundant trees, rivers, streams, waterfalls, and natural springs. It is a green community that has the misfortune of being located on the foothills of an active volcano and surrounded by oil and mineral reserves. Our lands are very valuable, not for the natural resources that I just mentioned, but for their spiritual richness. They are home to the guardians (both male and female) of the forests; the rivers are protected by Nä’a’yomo, female energies that protect the waters; the Chichonal Volcano is inhabited by Piokpatzyuwe. Language has been a unifying element in the struggle to defend our lands and life. The ancient wisdom that we have inherited from oral tradition requires that we respect Nasakopajk, or Mother/Father Earth.

Language has been a unifying element in the struggle to defend our lands and life.

Our grandmothers and grandfathers taught us to listen with our hearts, to listen to nature, to our dreams. For Zoque people, listening is a very particular process, done through the heart, not the mind. My mother would say, “I have a concern in my heart,” and then something would happen. My father would see that red mold was growing in the corners, and he would say, “Someone is going to die soon.” Sadly, that would happen. My great-uncle once dreamed that Piokpatzyuwe, the guardian of the Chichonal Volcano, invited him to a birthday celebration on March 28, 1982. Then, on that day, the volcano erupted.

We Zoques sometimes have dreams that are not connected to the person who had the dream but rather to others in that person’s family or community. For example, one man in our community dreamed that the guardian spirit of Atziki Mountain, which was threatened by a Canadian mining company, appeared and asked him not to damage the mountain. When the man woke up, he told the community leaders about the dream, and they organized themselves to prevent the miners from delivering more equipment to the planned mining site. The collective dream is a connection with our ancestry, and so we Zoques have the custom of talking about our dreams before they are erased from our memory. Through this listening process, a person can be cured of fear, sadness, and hopelessness.

Translation is important because it offers the chance to teach readers to think from their hearts and to collectively dream. Translation provides an alternative to a modernity that ignores nature’s voices, that lacks the words to name them. That sort of communication lies beyond the linguistic resources of language, beyond its capacity to offer vital energy. My Spanish translations of my Zoque poems seek a way out of silence. They include words that cannot be translated into Spanish because there are no comparable Spanish words. Translation is not about something as simple as words; rather, it is about thinking. It is thinking with the heart, listening to the invisible, and collectively dreaming something that gives the words’ essence a permanence in the world, different from what can be described in Spanish. There is no way for Spanish to label a philosophy of life that asks permission of the trees before cutting them down, or someone who asks permission before taking a step on the earth because invisible energies inhabit those particular spaces.

Translation is thinking with the heart, listening to the invisible, and collectively dreaming something that gives the words’ essence a permanence in the world.

Translation makes it possible to give voice to words, a voice that becomes action and meaning, purpose and transformation. To think of translation as the innate ability of humans to communicate with others implies not only the ability to learn new words but also to learn another way of being human—capable of communicating with a tree, a river, a mountain. That is impossible without naming. That which isn’t named doesn’t exist. For this reason, we must preserve the energetic power of the Indigenous names of the villages, the mountains, the rivers. I say Nasakobajk, which is Mother/Father Earth; I say Tzawi’kotzäjk, and it is the Mountain Shaped Like a Monkey. But “monkey-shaped mountain” isn’t Tzawi’kotzäjk. Tzawi’kotzäjk has its own history, its own voice, its own energy that is invoked through the simple fact of speaking its name.

Poetry is an act of linguistic resistance, a struggle to position our Native language in public, academic, and artistic spaces. Previously, we were obliged to speak in low voices because our language was a source of shame. No one taught us to love our Native languages—far from it. We have had to do that on our own, to find ourselves again, because we were lost in the hugeness of the world. Poetry has been a light amidst darkness.

Editorial note: This essay was adapted by the translator and Mikeas Sánchez from a Q&A that the author completed as guest artist at the University of Colorado in Colorado Springs in March 2021. 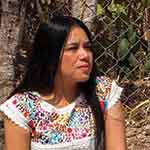 Born in Chiapas, Mexico, in 1980, Mikeas Sánchez is an Indigenous Zoque poet, translator, educator, radio producer, and activist. She holds a master’s degree from the Autonomous University of Barcelona, is the author of six books of poetry, and co-founded the award-winning Zoque organization ZODEVITE. WLT nominated her poem “Jesus Never Understood My Grandmother’s Prayers” for a 2014 Pushcart Prize. 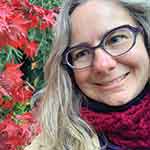 Wendy Call is co-editor of the craft anthology Telling True Stories, author of the award-winning book No Word for Welcome: The Mexican Village Faces the Global Economy, and translator of Irma Pineda’s In the Belly of Night and Other Poems.