An Introduction to Hebrew Lit: Congruency, Clash, and Collision

Jewish literature, Israeli literature, Hebrew literature. From a distance they might seem like three circles with quite a large congruency between them, almost absolute. Looking closer, these are three identity components that more than once clash and collide with one another. The writers in this special section write in Hebrew and work through their Jewish and Israeli identities, reflecting their lives in Israel and outside of it. Reading these works as a whole, we hope, allows for a different and complex outlook on Israeli society and the literature written from within it today.

The ensemble presented here is greatly varied: it is composed of short stories, a graphic story, poems, an essay, and visual artworks. It is created by writers and artists who belong to different generations and come from different places in Israel and the world, and the topics they’re interested in range from food, prophecy, love, family, danger, madness, and also a cat. Interestingly, in a time of cessation and withdrawal, the voices arising from Hebrew literature in this issue present, in fact, movement and even restlessness; one story takes place by the Gaza border, others in the suburbs of New York, Jerusalem, and Tel Aviv, but also Georgia (the country) and Canada. Immigration looms strongly, to and from Israel, like a wandering Jew stepping side by side with literature and language. 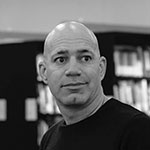 Yiftach Ashkenazi is the author of three novels and two collections of short stories. He has also published poems, short stories, and literary reviews in local magazines as well as stories and reviews published in English and German. In 2016 he won the Prime Minister’s Prize for Hebrew Literary Works and the Rotenstreich Scholarship for Outstanding Doctoral Student in the Humanities. At the moment, he is completing his PhD and writing a thriller TV series for an Israeli cable network. Dekel Shay Schory is an Israeli-born literary scholar and editor who teaches in the Department of Hebrew Literature at the Ben-Gurion University of the Negev. In 2016 Schory founded, with Yigal Schwartz and Moria Dayan Codish, a series of fiction books, Ruach Tzad (Side Wind). Over twenty books, published to critical and public acclaim, have appeared in the last three years.