How to Adopt a Cat

Hoping battles knowing in this three-act seduction (spoiler alert: there’s a cat in the story).

1. Try to seduce someone. How? Read him a story you wrote. The story will have quite a lot of sex in it. Body parts, passions, all that jazz. Lift your eyes off the page the moment your father appears in it. Smile a half smile. There will be irony there, of course, though you’ll admit to your therapist that you’re dead serious. Dead. Serious.

2. He won’t be seduced. He’s an artist, a free soul, but he’ll tell you he’s looking for someone stable to start a family with. In fact, you realize, he’s looking for his mother. Your mother, you tell him, died during your birth. It’s a lie, but it might just as well be the truth. Tell him about your childhood. Say: “I belong to a dynasty.” To your therapist say that everything you’re doing in order to make him fall in love with you fails.

3. Tell him, “I belong to a dynasty,” then add: “My parents wanted to live outside of society.” He will look at you with dark eyes. These are the kind of eyes I want my child to have, you’d feel like saying, then immediately erase the thought from your mind. You’ll shut up too. What child? you’ll think later. Ah, it’s simple: the one he won’t have with you.

Remember: a new dress always compensates for the loss of the body.

4. Buy clothes. Remember: a new dress always compensates for the loss of the body. Buy: high-heeled boots, a black top with Victorian lace, a long knit cardigan. Forget the winter passed. Forget, of course, that the winter has passed already. Pretend time doesn’t move actually. This is why you’ll sleep with the artist occasionally. Continue to read him stories while he’ll snort lines of Adderall on the low wooden table in his living room, the one you’ll also fuck on later.

5. You won’t tell your therapist that you’ve spent all the money you’re supposed to pay her on clothes. Take a loan, then another one. Buy more and more clothes and less and less of anything else, including food. But you won’t lose that much weight this time. Your body is used to hunger, and is bored by it. Tell that to your therapist. She’ll say: You need to eat. What did you eat today?

6. Certain animals, you learn, are capable of living both on land and in water. This fact crashes you—you, who are hardly capable of living in your own bed. Other people’s beds, you discover, are a different matter completely; you do that whole acrobatic sex thing with an ease that surprises you, let alone them.

7. The following things pass you by and you manage to realize that you can’t recognize them: Other people’s misery. Conversations in foreign languages. Joy.

8. One day the artist appears at your door. He holds a book in his hand and asks you to read to him from it. “Grown-ups are complicated creatures, full of quirks and secrets,” you’ll read aloud; “all of them, including one’s own parents, have two or three private habits hidden up their sleeves that would probably make you gasp if you knew about them.” You’ll close the book in a snap. You’ll ask him what he meant by asking you to read this of all parts. He’ll say: this was my favorite book as a kid. You’ll reply (your hands shaking) that you’re not interested. He’ll smile. Ask him again what his intention was. He’ll take the lace top off your body and will not answer.

9. Your therapist will tell you that you’re acting out again, and you’ll laugh in her face. You’ll finally pay her your debt, and stop seeing her. You’ll call the artist from the beach and tell him he can go to hell, him and his desire for stability. It will stir something in him. He’ll ask: Where are you? and hurry there. Right at sunset you’ll kiss. His tongue will feel hot and fleshy in your mouth. You’ll say to him: There’s something I haven’t told anyone, but immediately realize you won’t be able to tell him too. You’ll walk arm in arm back to the city, and a passerby will look at you and say: A beautiful couple. You’ll smile to each other and him and walk, in a uniform rhythm, to your place.

10. At night you’ll dream that your father is being murdered. He calls you a moment before the execution and tells you that this is the state of affairs. Tell him you love him. Tell him you always have, and that you’re sorry. Ask him whether it’s going to hurt. He’ll say: only when the bullet hits the flesh. Not afterward. When you scream “Daddy, Daddy” in your sleep, the artist will wake up and ask you, confused, what is going on. You’ll turn your back to him and won’t answer.

11. In the morning he’ll take you for breakfast in one of the new boutique hotels in the city center. You’ll pretend you’re hungry and that you like the food, but right before dessert you’ll ask to be excused and run to the toilet to throw up everything. The toilet is clean and there’s a bonsai palm tree there, and you won’t feel guilty for smearing the sparkling toilet bowl with your vomit. To the contrary. You’ll feel that with every finger you push down your throat, your secret shrinks inside you. When you get back to the table and look at the artist you’ll think that you’ll be able to live all your life with him without telling him.

12. It’s a lie, of course, and you know it. First because he has no intention of living with you, and second because secrets tend to make whoever holds them gasp. You yourself carry your secret like it was a precious pet, stroke and nurture it while you feed yourself with more and more stories. In one of them you fall in love with an artist. In another you become an artist yourself.

You yourself carry your secret like it was a precious pet.

13. The two stories exclude each other; they contradict. The artist, in his turn, asks that you in fact write about him. You read him a story in which you hide his character well, and he recognizes himself in all the wrong places, the flattering ones. He’s excited by it, and his excitement still moves you. What should you do now? you think. How will your story end?

14. Pretty quickly, you find out. Soon the artist meets a beautiful lawyer and you realize that you, with your starving body, will never be able to give him what he needs. But what do you need? You need, you find out, the whole world.

15. Whereof one cannot speak, thereof one must laugh. So you call your ex-therapist and tell her that the artist has left you. Ha ha, you’ll laugh when you tell her. Ha, ha.

Hope competed with the secret inside you, and for a short while made it disappear completely, and you liked it.

16. The artist will return a few months later and sleep with you again, then tell you that his lawyer girlfriend is pregnant. Ha, ha, you’ll answer. You thought no differently. But still you hoped for something; hope competed with the secret inside you, and for a short while made it disappear completely, and you liked it. Now you know exactly what you have to do. You’ll sleep with him that afternoon over and over again, until you exhaust yourself. At night you’ll say goodbye to him, this time for good. Behind the gate to the house you’ll hear a meow. It’s a kitten. You take it in your arms and hold it as closely as possible to your heart. 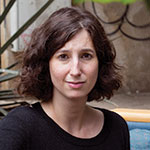