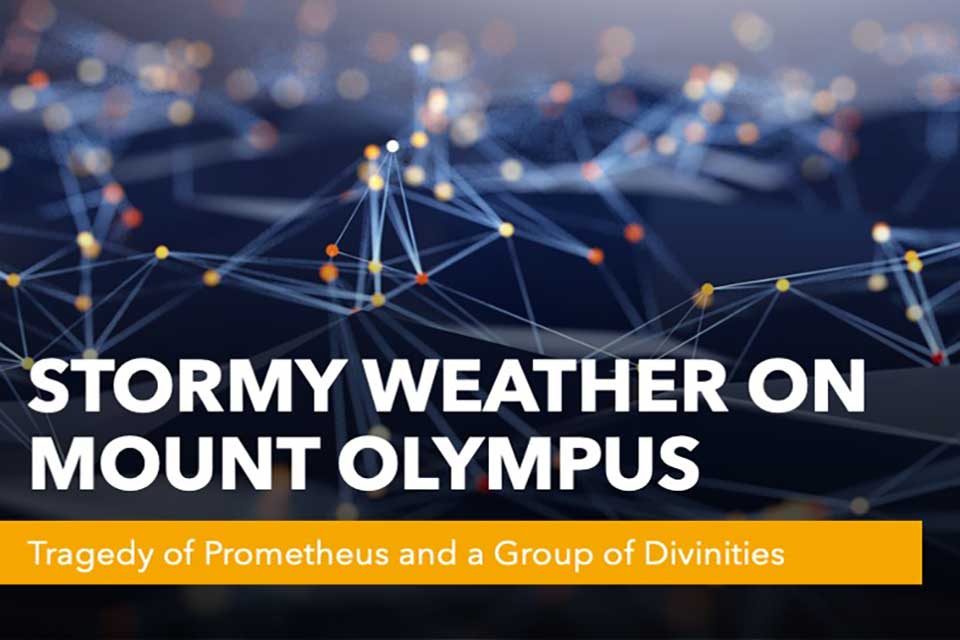 The world English-language premiere of Ismail Kadare’s play Stormy Weather on Mount Olympus took place on October 21 during the 2020 Neustadt Lit Fest. Theater director, actor, and educator Fabrice Conte-Williamson co-translated the play and offers his insights into the unique challenges encountered and overcome during the process.

In late 2019, David Bellos and I were approached by Daniel Simon and World Literature Today with a translation project of Ismail Kadare’s 1998 play, Stormy Weather on Mount Olympus. The objective was to produce the first English-language translation of the author’s only dramatic work, which would then be staged as a live theatrical event and performed the following fall, as part of the celebrations for Kadare being awarded the 2020 Neustadt International Prize for Literature.

Without question, I was looking forward to closely collaborating with Dr. Bellos, a celebrated translator, award-winning biographer, and world-renowned specialist of Kadare’s literary oeuvre. As a theater director, I thrive on the dynamics of the collaborative process, and this project provided me with a unique opportunity to develop a new kind of creative relationship. Most importantly, Dr. Bellos’s intimate knowledge of Kadare’s world and his great appreciation for its labyrinthian mythology—he has translated a number of his novels—proved invaluable assets as we embarked on this literary journey. Furthermore, the collaborative process would be continuing beyond the completion of the translation: Professor Susan Shaughnessy of the University of Oklahoma’s Helmerich School of Drama and I were set to adapt the play, and she had accepted directing responsibilities for its US premiere during the festival.

However, plans for a series of live performances of Stormy Weather on Mount Olympus to be held during the fiftieth-anniversary Neustadt Lit Fest were abandoned following the start of the event that would define the year 2020: the Covid-19 pandemic. By early spring, the rapidly worsening health crisis had prompted the sudden cancellation of most conferences and festivals as well as the inevitable shutdown of theaters across the country. Thus, it became difficult to imagine how the play would receive any kind of stage production given the newly imposed restrictions and protocols aimed at slowing down the spread of the virus. Despite this grim outlook, the festival organizers announced that the event would be held virtually, using the Zoom platform. This alternative format ensured a safe environment for festival participants and ultimately allowed for a larger and more international audience to attend. It became evident that the staging of Stormy Weather on Mount Olympus needed to embrace the trend of virtual events as well, and so it was decided to record the play in the style of an old-fashioned radio drama or the more modern audiobook. The recording would then be edited and later broadcast via Zoom.

While preparations for the virtual festival were underway, Dr. Bellos and I continued working on the translation. Our task was specifically to translate the play from its French version by Jusuf Vrioni, titled Mauvaise saison sur l’Olympe, into a script both faithful to the author’s original text and engaging for actors to perform. Though Kadare does not seem to have written the play for the express purpose of being performed on stage, theater artists tend to consider all works of dramatic literature as potentially producible. In fact, I admit that it would be nearly impossible for me to refrain from imagining how a script could be staged while in the process of reading it. Even plays classified as “closet dramas”—created primarily for the pleasure of the reader and unconcerned with the challenges and demands of staging—prompt the ardent awakening of my deepest directorial impulses. Therefore, this translation of Kadare’s tragedy was never an end unto itself but rather the framework for a much larger structure that would encompass the contributions of many other artists: among them a director, a group of actors, a sound engineer, and a dramaturg.

The development of the English translation was marked by several challenges. The first challenge lay in the quality of Vrioni’s French version. It would be fair to describe its language as complex, often delightfully convoluted, and sometimes stilted. Although this text provides a satisfying experience for the reader, it was likely not crafted with actors in mind. Consequently, a large part of my process was dedicated to undoing the linguistic knots of Vrioni’s translation, investigating certain surprising or unusual vocabulary choices, and designing a strategy that would engender a text better suited for performance. Throughout this process, I systematically considered how the lines would sound when performed by actors, often reading the scenes out loud in my office to gauge the efficiency of the vocabulary and the speakability of the sentence structure.

Several scenes feature a group of goddesses engaged in what resembles teenage gossip, thereby making these sections more reminiscent of the cult movie Mean Girls than of Aeschylus’s tragedies.

The second challenge came from the constant shifts in tone and register, a fundamental characteristic of this play. For example, the first two tableaux provide exposition through a fairly casual banter between the characters gathered outside the Great Hall of the gods on Mount Olympus. In contrast, the third tableau—which takes place on Earth—is written in a kind of imaginary protolanguage. In this scene, Kadare depicts the unsophisticated dawn of humanity with characters speaking extremely short lines—only a single word at times—as if language itself was in its infancy. The fourth tableau, centered around the trial of Prometheus, takes on a more juridico-political tone as the gods debate the theft of fire, listen to a variety of witnesses, and discuss the fate of the defendant. The fifth and sixth tableaux return to bantering dialogue while the seventh and eighth mark a distinct shift in the play. They both feature longer speeches with a more recognizable philosophical undertone as Prometheus reflects on his actions, on his ambiguous relationship to power, and on the punishment he has received. The tenth, eleventh, and thirteenth tableaux bear similar qualities. On the other hand, the ninth, twelfth, and fourteenth tableaux clearly stand out from the rest. All three scenes feature a group of goddesses engaged in what resembles teenage gossip, thereby making these sections more reminiscent of the cult movie Mean Girls than of Aeschylus’s tragedies.

With such variety between the different tableaux, the translators needed to find a way to create a consistent linguistic landscape for the play as whole, while also honoring the important shifts in tone and register that give each tableau its unique color. These differences between tableaux are crucial because they assert the episodic structure of Stormy Weather on Mount Olympus, a signature aspect of postmodern European drama. I would also describe the play’s structure as a kaleidoscopic narrative—or a form of multiverse—in response to the author’s note that follows the dramatis personae: “The events take place on three levels: Heaven, Earth, and the Underworld. The time of action is universal or relative, oriented or nonoriented, and operates at different speeds in Heaven, on Earth, and in the Underworld.” In the end, the distinctive shifts in linguistic styles clearly reinforce the parallel worlds of Kadare’s tragedy.

Kadare’s oeuvre functions as a vast mythological universe in which each work contributes to the overall literary mosaic.

From March to July 2020, the translation process followed a simple but efficient pattern. I created a draft for each tableau, which I sent to Dr. Bellos. He then replied with generous feedback, notes, and suggestions. His correspondence usually featured additional background information about specific elements of the script—in particular how they echo episodes in Kadare’s life and in Albania’s political history. He was also quick to point out the numerous occasions of intertextualities within Kadare’s oeuvre. For example, the Dream Courier, a secondary character in Stormy Weather on Mount Olympus, also appears in “La Porteuse de songes,” a short story from 1993.[i] Thus it seems that Kadare’s oeuvre functions as a vast mythological universe in which each work contributes to the overall literary mosaic.

In a way, the production of Stormy Weather on Mount Olympus in an audiobook-inspired format was also a kind of translation, a theatrical metamorphosis from page to stage—or in this case an auditory stage. The achievements of Professor Shaughnessy and the rest of the production team were even more impressive given the challenges brought forth by the pandemic. In the end, I can’t help but wonder if this audiobook format was perhaps the very best way to present such an epic play as it kept our imagination fully engaged and beautifully highlighted Kadare’s powerful text. The production of dramatic works by contemporary authors remains a critical aspect of theater-making, and the presentation of Stormy Weather on Mount Olympus stands as an important contribution to that ongoing cultural mission.

Editorial note: The play translation and production were made possible, in part, by a grant from the Norman Arts Council Hotel Tax Grant Program. During the festival, Professors Conte-Williamson and Bellos participated in a panel on literary translation co-sponsored by the American Literary Translators Association. Audio recording and production of the play were provided by Ioannis Andriotis. 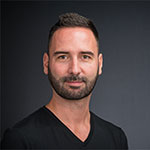 Fabrice Conte-Williamson is a director, actor, and theater educator, teaching courses in performance and theater history at the University of Wisconsin–Parkside. He received an MFA from the University of Nice Sophia Antipolis as well as an MFA in directing and an interdisciplinary PhD from the University of Oklahoma Helmerich School of Drama. His primary research focuses on postmodern French dramatic literature and performance theory, the role of literary myth in dramatic literature, and the development of multilingual and cross-cultural theater movements. From 2007 to 2013 he was an assistant professor of theater and chair of the Department of Visual & Performing Arts at St. Gregory’s University. While teaching at OU, he served as chair of the Arts Management and Administration Initiative for the Kennedy Center American College Theater Festival (KCACTF) Region VI. His favorite directing credits include A Year with Frog and Toad, Roberto Zucco, and The Laramie Project.