Surviving and Subverting the Totalitarian State: A Tribute to Ismail Kadare

As part of the ceremony honoring Kadare as the 2020 laureate—with participants logging in from dozens of countries around the world—Kadare’s nominating juror, Kapka Kassabova, offered a video tribute from her home in Scotland.

It is a pleasure to be broadcasting this tribute to the work of Ismail Kadare from the Scottish Highlands. Though it would have been a greater pleasure yet to be with you all in autumnal Oklahoma.

Ismail Kadare has spoken of literature as an antidote to evil: “Faith in literature and in the creative process brings protection. It generates antibodies that allow you to struggle against state terror.” So I want to start with an antidote of a word that is crucial in this era of mean politics and greedy exploitation of the earth’s resources, when we are all experiencing loss. Generosity. It is the generosity of the Neustadt family that makes it possible for our borderless community of writers, readers, students, and lovers of literature to celebrate great art and the people who make it. Generosity is at the heart of all creative work. To make a true work of art, you have to go for broke, give all you have, and expect nothing in return.

I have been reading Ismail Kadare for twenty years, since I was a university student. And I continue to read and reread him today, when our books are in a sort of background conversation, even if we are not, because that’s the nature of literature—once begun, the conversation doesn’t need the author.

Great literature goes beyond language, of course. Like music, it works by a kind of psychic osmosis. It crosses all boundaries—between the waking and the dreaming mind, between writer and reader, between continents and moments in time. This is why, when I opened my first Kadare book, in the 1990s in New Zealand, it spoke to me instantly, even if it was written around the time of my birth, in a country I knew nothing about. That was Broken April. And within a few pages, I knew that this book was talking to me from the highlands of northern Albania, but about myself, about the nature of family and clan loyalty, about freedom and why some reject it, about why humanity is periodically gripped by a ritual death-wish, and about how draculean regimes can sacrifice their young, to keep themselves in power. “Blood-feudology.” Kronos devours his children: this is a theme close to my own writer’s heart, and one of the themes in Kadare’s fiction. And in our world today. In some way, that which many are facing today politically, in their countries, is where Kadare is coming from. The pitting of the individual against an infernal, faceless machine of power, the struggle to reclaim a voice in a cacophony of lies—this is his home turf.

The pitting of the individual against an infernal, faceless machine of power, the struggle to reclaim a voice in a cacophony of lies—this is Kadare’s home turf.

One of the things I love and admire the most in his work is how he turns a landscape into a state of mind, and a state of mind into a place. The novel that has haunted me the most is The General of the Dead Army. It gave me lucid dreams. In the mountainous Albanian North, Italian soldiers from World War II are being exhumed from the frozen earth, and it’s raining. That mindscape with its furrows of collective memory is ingrained in me. Kadare’s gothic Balkan landscapes are microcosms where a Jungian principle comes into play: “the psyche is the world.”

Another great pleasure in Kadare’s fiction is his subversive humor. In his joyful early novel Chronicle in Stone, when the foreign tanks roll into town and the air-raid siren begins to wail, an old woman says: “Now we have a mourner who will wail for us all.” In Broken April, the young protagonist Gjorg imagines how, once he is shot in a sacrificial vendetta, his wailers will scratch their faces and how “from now on the lives of all the generations to come in the two families would be an endless funeral feast, each side playing host in turn. And each side, before leaving for the feast, would don that blood-stained mask.”

Kadare is not a mourner. Although his narratives are set in conditions of an all-pervasive, self-cannibalizing tyranny, the guiding narrative consciousness at work is one that illuminates, subverts, and satirizes the very nature of tyranny. Thus in The Traitor’s Niche, the erasure of identity is carried out through the Central Archive, “according to the old secret doctrine of Caw-caw and passed through five principal stages: first, the physical crushing of rebellion; second, the extirpation of any idea of rebellion; third, the destruction of culture, art and tradition; fourth, the eradication or impoverishment of the language; and fifth, the extinction or enfeeblement of national memory.” The Traitor’s Niche was written in 1978 in totalitarian Albania and allegorically set in the last, dysfunctional century of Ottoman colonization. It is one of his most haunting satires of absolute tyranny. At the same time, it is a great Balkan road trip of a novel.

“Many things were murky,” Kadare has said of life under totalitarianism, “because two realities were closely intertwined—concrete reality, and the other kind, virtual reality. It was a kind of geographical or spiritual negative landscape. That’s roughly how Mandelstam imagined Dante’s inferno, as an indeterminate place, like the fringes of an epidemic.”

Kadare’s work illuminates such negative landscapes. If you want a glimpse into the mind of a paranoid politician and his entourage, and those enslaved by him, read The Pyramid, where generations are harnessed by a pharaoh to build regime-aggrandizing structures. If you want to understand how a surveillance state works at the deepest psychological level, read The Palace of Dreams, in which citizens’ dreams are recorded by the state and searched for either oracular or traitorous content. Having the wrong dream can kill you. Or read The Successor and its companion, Agamemnon’s Daughter, to understand how mediocrity and evil are linked, how a tyranny ritually devours itself, but not before it feasts on the innocent. Both The Successor and Agamemnon’s Daughter are masterworks of existential horror in the form of political thrillers.

If you want to understand the Balkans and Europe in the twentieth century, read Chronicle in Stone, where a boy not unlike the young Kadare witnesses the fall of his city, Gjirokastër, to successive invaders. If you want to understand why East and West are forever fused in the Balkans, why Islam and Christianity are two faces of the same coin, read Three Elegies for Kosovo.

The master narrative of Kadare’s work is Homeric in nature. It continues to uplift, transport, and cast the light of understanding.

Kadare has said: “When the truth is hidden or over-ridden, its place is soon taken by a kind of deceptive fog which, day by day, month by month, paralyses everything. As the Greek tragedians said, every hidden crime gives birth to a new crime that resembles its predecessors.” His novels are so cunningly inventive in form, and so well-traveled in this foggy realm of human experience, that they remain perennially fresh. The master narrative of Kadare’s work is Homeric in nature. It continues to uplift, transport, and cast the light of understanding. Kadare has traveled a long road—Dante-like, both protagonist and chronicler of the Underworld.

There is really only one more thing to say, and I say it to Ismail Kadare on behalf of his readers around the world, present and future. Faleminderit. Thank you. 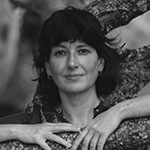 Kapka Kassabova is a poet and writer. Border (2017) and To the Lake (2020) explore the human geography of the southern Balkans. Border won the British Academy’s Al-Rodhan Prize, the Saltire Book of the Year, the Stanford-Dolman Book of the Year, and was shortlisted for the National Book Critics Circle Award, the Prix européen du livre, and the Angelus Award.