Why Should We Read Ismail Kadare?

Reading Kadare, David Bellos finds the whole world in literary form: a masterful blend of myth and folklore with portraits of modern minds and local realities—plus a cunning, wry kind of humor.

The main and overriding reason why we should read Ismail Kadare is that he is a great storyteller. He tells wonderful stories—and he tells many.

In some ways, he’s like Balzac. But Balzac limited himself to one place, called Paris, and one time, the 1820s (with just a few excursions to the French provinces and the Renaissance), whereas Kadare takes us everywhere: to ancient Egypt, to modern China, to a tourist resort on the Baltic, to Moscow and Austria and to the Ottoman Empire. He has an almost Jules Verne–like capacity for traveling the world.

If you read Ismail Kadare, you also cover all the ages since the invention of script: from Cheops building the Great Pyramid to arguments over the succession of Enver Hoxha in 1980s Albania, and on to events and situations that take place in western Europe after the fall of communism.

The largest number of Kadare’s stories are set in the nineteenth and twentieth centuries. Broken April takes place in the 1930s, Chronicle in Stone in the 1940s, The General of the Dead Army in the 1950s, Agamemnon’s Daughter in the 1970s. These tales allow you to read the history of Albania—and of the world—through the prism of fiction. That’s one good reason why you should read Kadare, and why I love to do so. He has created, so to speak, a parallel universe, with a deep relationship to the one we live in. It is the whole world in literary form.

Kadare has created, so to speak, a parallel universe, with a deep relationship to the one we live in. It is the whole world in literary form.

Kadare is of course many things besides a writer of stories. He is a dramatist and an essayist, and for a time he was a journalist and editor too. At the start of his long career, he rose to precocious fame as a poet—as the great new poet of modern Albania. But readers of English can only really know him as a fiction writer. That’s not so bad, because by far the largest part of his activity has been in the form of the novel.

But Kadare does not write only one kind of novel. Some of his stories are tiny, just five pages long, like The Dream Courier; others are great sagas that run to five hundred pages and more. In between, there are long short stories, like Agamemnon’s Daughter, and then there are novellas that Kadare likes to call “micronovels,” such as The Flight of the Stork. Then there are standard-length novels like Broken April, and then the romans-fleuves, including The Concert and The Great Winter. So in terms of formal construction, you have a tremendous variety to explore within a work that itself explores the whole world.

It’s common to read Kadare as a writer who only really talks about his own life in Albania under the Hoxha regime. There is certainly some truth in the notion that all the different places and times of Kadare’s universe are displaced images of one particular place and time. But you do not have to know that, nor do you need to take any notice of it in order to read Kadare. You can read Kadare’s stories simply as stories. He can get you interested in ghosts, in brides who travel hundreds of miles overnight on a flying horse, in corpses that rise from the grave . . . and in all kinds of things that are not immediately appealing to a rational modern reader like myself. But his blending of myth and folklore with portraits of modern minds and local realities is so masterful that I find myself drawn in, and you will too. Kadare’s universe has many levels, including the irrational, the transcendent, and the strange.

Kadare’s universe has many levels, including the irrational, the transcendent, and the strange.

One of the most striking and constant features of Kadare’s world is the looming presence of certain myths from ancient Greece: not the whole of Greek mythology, but those myths that dramatize family hatreds and the intoxicating, corrupting, and fearsome effect of proximity to power.

The second thing that is always present in Kadare are Balkan folk tales. I call then “Balkan” rather than simply Albanian because these folk tales exist in many other languages of the region as well. Indeed, Kadare dramatizes precisely this question of the ethnic origins of Balkan cultures in The File on H, one of the most entrancing of his tales, based on the historical exploits of American folklorists in the Albanian borderlands in the 1930s.

The third dominant feature I want to mention is that Kadare explores in almost every one of his stories the relationship between the personal and the political. Not politics in the sense of topical or party-political issues, but politics in the broadest sense, that is to say, how groups and individuals manipulate others and exercise power over them.

Another characteristic of the world of Ismail Kadare—let’s call it Kadaria—is the weather, which, as others have said, functions almost like a character in its own right. The weather in Kadaria is always ghastly, and it makes the climate of Scotland seem by comparison as balmy as the Italian Riviera. As a reader, you quickly catch on to the almost comical dimension of Kadare’s climatic notations (fog, drizzle, rain, snow, cold, cloudy), since Albania’s climate is in fact more like the Italian Riviera than the banks of Loch Lomond. They are not plausible settings of any actual scene, but key signatures to the mood, which tells you that this is not going to be a happy story. But they do much more than that: they tell you that there are not going to be any blonde maidens sitting astride gleaming tractors bringing in the sun-ripened harvest of grain, and that the work will have no truck with the norms imposed on Albanian literature by Soviet doctrines of socialist realism. It is really a very sly way of carving out a uniquely critical position within a society where criticism was, shall we say, seriously underappreciated.

Many of Kadare’s human characters are often not sure whether they are awake or asleep. Typical introductions to the inner lives of protagonists begin: “it seemed to him that . . . ,” “he wasn’t quite sure whether . . . ,” and so on. The borderline between being able to see clearly and not being able to see clearly is never clear-cut. So that when you have finished reading a novel, whether it is the retelling of a legend like The Ghost Rider or a quasihistorical reconstruction like The General of the Dead Army, you are not quite sure whether you’ve had a dream or not. Kadare constantly nudges us toward doubting the difference between waking and dreaming, and makes us reflect on the ways in which life is like a dream, and in what way nightmares are just like life.

So it is no surprise that Palace of Dreams (originally entitled The Employee of the Palace of Dreams) is the central pillar of Kadare’s ramified fictional world: it’s a novel that places at the center of a sinister and unpredictably autocratic society an institution devoted to the manipulation of dreams, and at the center of that institution a sensitive and confused young man who truly does not know what he is doing, or why he ends up running the whole show.

Finally, in case all this scares you away, since you may not be instantly attracted to foggy minds wandering in and out of dreamscapes where it rains and snows, I must add, and indeed insist, that Kadare is really quite funny. You have to let yourself plunge deep into this parallel universe, but once you do, you discover a cunning, wry kind of humor that is both situational and verbal. Perhaps surprisingly, Kadare’s sly digs come through even in multiple translation.

Kadare has said on more than one occasion that his readers and critics should not pay too much attention to context. In support of this way of reading him, I would point out that Kadare’s manner of telling stories, and the nature of the stories that he tells, has not changed one iota over the past sixty years, even though the author’s social, geographical, and political context have changed beyond recognition. It is as if Kadare’s entire imaginary world arose fully formed at the start, and that the forty or fifty stories and novels that he has produced since then are but the fragments of a larger, coherent, unchanging whole.

What underscores the coherence of Kadare’s œuvre is his systematic reuse of locations, objects, stories, and references. In The Great Wall, for example, there’s a symbol that harks back directly to The Three-Arched Bridge; in The File on H, there’s an inn that is visited in several other stories; in The Blinding Order, there’s a young man who will later become the protagonist of Palace of Dreams, and in that novel, there’s a performance of an oral epic that takes us right back to The File on H. . . . Now, that is quite like Balzac’s device of the “reappearing characters” in The Human Comedy, but it is in my view much more subtle, since it links not so much the narrative plots of the novels as their entire fabric of allusion and reference. It is a striking achievement, and it also means that each story you read is not just that story—it is a contribution to your memory and understanding of other stories you have read, and it adds to the overall feeling that you are indeed in a different world that is weirdly like a dream.

Of course, the more you read, the more you grasp of the thousands of threads that tie Kadare’s works together. In English, alas, only about one third of it is available at the present time. That is a pretty good reason for learning French, if you balk at the effort needed to learn Albanian well enough to read this great master of modern European literature. Let’s hope it is also a good enough reason for British and American publishers to commission a heap of new translations, with the encouragement given to them by the awarding of the Neustadt Prize. 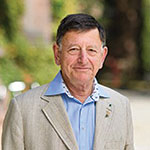 David Bellos is a professor of French and comparative literature at Princeton University and has translated numerous authors from French. Educated at Oxford, he has written biographies of Georges Perec and Jacques Tati, a study of Romain Gary, and an introduction to translation studies, Is That a Fish in Your Ear? His latest book is a study of Victor Hugo’s masterpiece, Les Misérables.