I remember when I couldn’t read music;
The pile of unfamiliar books lay listless;
my hands glided across every open note,
reaching out to the piano,
an overture to harmonize the random sounds
into one
melody. I was six . . .

She led me through six
measures, my fingers following hers. “Music,”
she hummed, “is what we’ll create.” One by one
we approached my listless
drills. I felt the grand piano
long enough to caress every note.

Her music, my only language. The note,
my first alphabet. Six
seasons later, we bought a new piano.
The rioters outside listened to our music,
the estranged waltzes. My fingers, no longer listless,
had learned to crescendo from one

measure to the next, perfecting one
suite after another. The note
from the committee arrived on a listless
afternoon, as the Shah’s requiem dimmed. I had six
weeks to perform a lifetime of music.
My teacher stood beside the piano

choosing the études, correcting my piano-
fortes. The voices blending into one,
a deafening cry for freedom. The music
fading – the stilted chord, every pedaled note.
We practiced together for six
days, the metronome ticking away the listless

hours. Nothing seemed listless
on stage, the grand piano
awaiting my turn. Six
pages delivered, the judges following my one
remaining bar of music. Gunshots crackling with each note,
a revolution unfolding as the music

After the Iranian Revolution of 1979, the Islamic Republic placed restrictions on public musical performances and the pursuit of professional musical interests. Although traditional Persian music regained some of its status and popularity, the state maintained a complicated, and often negative, relationship with Western music, especially in public settings. This poem recognizes the beauty and burden of creating “boundless music” of all genres and in all social settings. 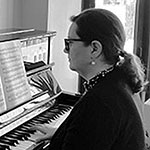 Firoozeh Kashani-Sabet is a novelist and a professor of Middle Eastern history at the University of Pennsylvania. Her creative work follows the treacherous path of politics by intruding into people’s personal lives and private spaces. Through her poems and stories, she explores some of the themes of her academic research, including alienation, prejudice, power, love, and violence.