In the City of Gold and Silver: The Story of Begum Hazrat Mahal by Kenizé Mourad 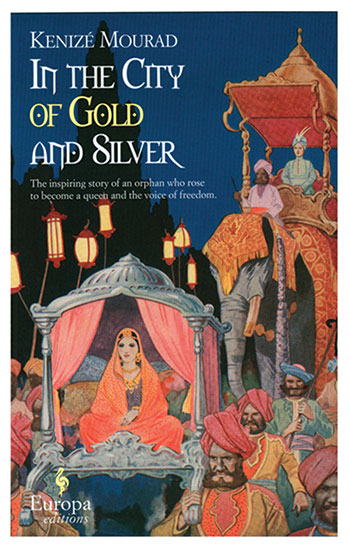 A multinational corporation controls much of Asia, Muslim insurgents are battling occupiers from the West, and the most powerful person in the world is a woman. The year? 1857.

Kenizé Mourad’s latest historical novel is set during the Indian Rebellion, a conflict that spelled the end of the East India Company and the beginning of Queen Victoria’s direct rule over India. Leading the revolt in Awadh state was another queen, the brave and beautiful Begum Hazrat Mahal. In the City of Gold and Silver is her story.

In Mourad’s telling, Mahal was a rebel well before the uprising began. Within the walls of the palace in Lucknow, she writes plays mocking the British and criticizes her husband the king for his policy of appeasing the acquisitive East India Company. She is an unapologetic freethinker, loathed by the other royal wives. The rebellion breaks out while the king is detained in Calcutta, so Mahal rises to the occasion: she has her son the prince made temporary ruler, and she governs the kingdom as regent. Uniting Hindus, Sunnis, and Shias, Mahal gives the British a run for their money but eventually retreats to Nepal, outgunned by her enemies and betrayed by her friends.

Mourad, herself the daughter of an Indian rajah and an Ottoman princess, is well positioned to tell the tale. Her father lived in Lucknow—the city of gold and silver—and she depicts it in the manner of a native: that is to say, lovingly but unsparingly. Among Lucknow’s elite, “extreme sophistication is the rule and the most decadent elegance a virtue.” At the palace garden parties and the all-night readings of Islamic and Hindu poetry, one can taste “the most exquisite quality of life ever known.” But our heroine, Mahal, is an outsider, her courage and conviction “rare qualities indeed in Lucknow’s high society, which would tend to mock such traits.” Lucknowi culture, with its artistic splendor and religious tolerance, would never be the same after British rule. Mourad conveys the pity of it all without pitying anyone; like her aristocratic characters, she is sensitive to condescending tones, no matter how subtle.

Sometimes the story of Mahal reads like a hagiography, and sometimes the reader is taught so much history that Mahal fades into the background. As a result, she never becomes as tangible as Selma, for example, the protagonist of Mourad’s first historical novel, Regards from the Dead Princess (1989). But if Mahal does not quite come alive as an individual, she exists on the page as a potent symbol for the strength of Muslim women, a strength too often ignored in our own society. Mourad has found a heroine for our time and a story for the ages, which she tells with a sense of cultural nuance reflecting her own rich biography.