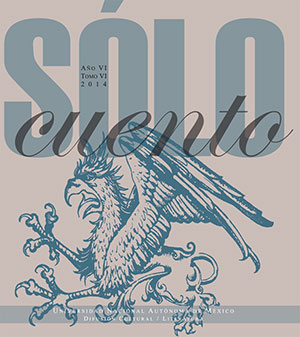 Since 2009, the National Autonomous University in Mexico has been publishing the series Sólo cuento, a yearly anthology of the best Hispanic short stories. In the sixth volume (2014), twenty-seven stories offer a glimpse at the state of the genre in the Hispanic world.

The anthology is not organized in a traditional way: there is no authorial, generational, or thematic unity. Well-known authors (Eltit, Boullosa, Valenzuela, among others) are grouped together with younger ones who have been well received by critics (Mairal, Jeftanovic, Zambra, among others). Puerto Rican novelist Mayra Santos-Febres, who collected the stories, chose to favor writers from the Caribbean and Central America, regions not as well known as the Southern Cone’s or Mexico’s strong short-story traditions. We also find pleasant surprises: three writers from Spain, one writer of Brazilian-Ecuadoran heritage, and an author from Equatorial Guinea. This makes for an eclectic, refreshing group of stories and so, as Edmundo Paz Soldán says in the prologue, Sólo cuento VI offers “a catalog of the many shapes the short story can morph into.”

I will mention a few examples. The first section, “Dead Serious,” gathers six stories focused on death. While Boullosa’s deftly registers a child’s look at a cruel world, Spain’s Ovejero tries his hand at a tale involving a journalist’s visit to Cuba looking for old revolutionaries, failing to engage the reader’s interest. The second section, “Shadow Authors,” includes seven stories whose characters are writers or aspiring writers. Argentine Mairal’s story riffs on the idea of a “personal hypnotizer” and is both funny and sad at the same time, while Equatorial Guinean Mba Abogo’s story is one of the best in the book, combining literary references with a focus on discrimination and labor practices in Europe. In “The World Outside,” we find seven stories, such as a classic tale of secrets and revenge (Valdez, Dominican) or subtle identity fables (González, Argentine). The final seven stories are grouped under “Capsizings.” The Chilean Zambra goes back to elementary school for his tale and shows once more his gift for understated tension. And, in what is perhaps the real find of Sólo cuento VI, Rita Indiana Hernández’s story—set in Miami—about a mix of nationalities, languages, sexual acts, and cultural references (such as Angry Birds and Whole Foods) explodes with narrative force. The Dominican Hernández, who is also a musician, knows how to keep a beat.

Sólo cuento VI demonstrates that the Hispanic short story continues to push boundaries, cross borders, and offer a welcome continuity in a genre that has always had a place of distinction in Latin American literature. In a time where we might wonder if the activity of reading will be reduced to Facebook likes or simply to the images of Instagram, these stories ask us to gather around the fire and read.