Where Have the Dead Gone? And Other Poems by Shiv K. Kumar 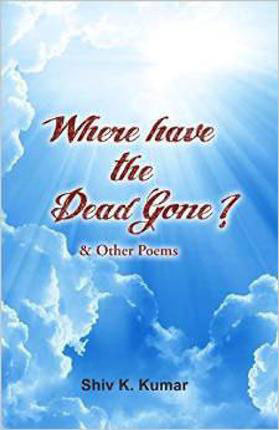 Where Have the Dead Gone? And Other Poems contains sixty-seven thought-provoking poems by the seasoned poet Shiv K. Kumar. This poetic journey begins with a quest—“Where have they gone?”—and ends “in the woods,” with the determination to “learn to speak the language of trees, bushes, snakes, and beasts” via memory lanes, recalling the dream world of youth.

What is striking in this poetry collection is Kumar’s imaginative skill, which has not blurred over his career. In the evening of his life, he never forgets the other world where he has to go—and so the dead, funeral processions, shadows, ghosts, tears, fire, hospital, sleepwalkers, time, pain, space, trains, sand, and all things associated with death remain flashing on the screen of his mind. He also often takes the reader to memory lanes from his childhood days—stars, hills, clouds, woods, river, the gardens of Chashme Shahi, flowers, along with the streets of Delhi.

The poet knows well how to use memory as a technique for exploring his “Self” as well as voicing his feelings. He worships love and firmly believes in the religion of art for art’s sake, though he never becomes blind to the happenings around him and the world. What he recommends is naturalness and innocence. Intuitions mark his life, but intellect seeks expression through writing. “The best way to choose is not to choose / but just press on.” He loves animals, birds, insects—be they dogs, eagles, pigeons, or ants. He attempts to trace the genesis of the birth of pain, which he does not find in the eviction of the first ancestors but in the first labor through which Eve passed. This labor pain in childbirth becomes responsible for every “facet of trauma”—be it “separation, sickness, and deception.”

Kumar’s poetry is rich enough to evoke the fusion of idea and feeling. What makes it particularly appealing is his confessional mode, which he uses to go into the hearts of his readers.

Where Have the Dead Gone? And Other Poems remains a mystery. The poet attempts to decipher the unwritten script and listen to the unheard melodies of this other world. He lives intuitively and finds that “The way to equipoise / is to sleepwalk through life.” He does not wish to impart any absolute message through his poetry, although the reader may become aware and show interest in understanding life through Kumar’s poems—the poems that speak of the experiences in life.