Zombies and Calculus by Colin Adams 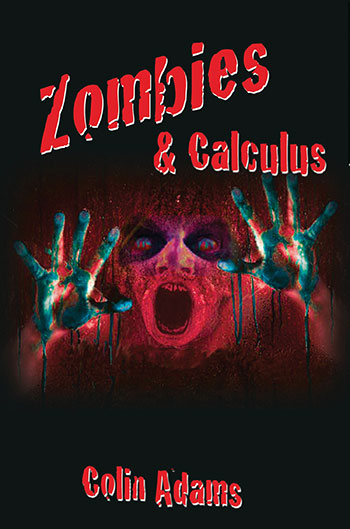 Professor Williams’s math class is having a bad day. It’s the first week after spring break at bucolic Roberts College, and Williams is reviewing derivatives. As he scribbles diagrams on the blackboard, a late–arriving student shuffles into the classroom and proceeds to chew a chunk out of the neck of one student and bite the nose off another.

In author Colin Adams’s conceit, Williams is writing a few months after the outbreak of zombification (“some janitor at Harvard tried to eat a freshman”). His goal? To “tell you how to use calculus to help you stay alive.”

By chapter 2, in which characters use a differential equation to estimate the increase in the zombie population, it’s clear that Adams intends his hell-for-leather plot to be a skeleton he will flesh out with calculus lectures.

He has previously used humor to enliven mathematics in two “streetwise guides” to calculus (1998 and 2001, with Joel Hass and Abigail Thompson). Here, amid battles, chases, and “assorted atrocities,” he deploys dry wit, academic satire, and knockabout slapstick to make these shenanigans (and the math) more palatable.

But there is a problem. Repeatedly, Adams’s characters have to pause, no matter how dire their peril, to chat about calculus. Replete with diagrams and equations, these “conversations” typically cover several pages; many are extended in an appendix that constitutes almost half the book.

Thus, after three hours of battling zombies in the college’s science center, Williams and biology prof Jessie Sullivan wind up trapped in a plastic port–a–potty near a construction site. Hunkered down in the adjacent toilet is Oscar Gunderson, Williams’s academic rival and Jessie’s former lover. While zombies mill about outside, the three wrangle about their romantic entanglements. Then Williams notices a large scratch on Jessie’s leg, almost surely an indication of infection. This discovery initiates not an escape attempt but a calm discussion of elementary virology and epidemiology followed by a discourse on models of the growth of the “Z virus” in the brain. The latter plunges the characters (and the reader) into the heady realm of nonlinear differential equations. All this chitchat stops the story dead in its tracks for quite a while. (“I looked at my watch and realized we had been in the port-a-potty for six hours.”)

Approached in the right spirit, Zombies and Calculus offers a lot of silly fun and lucid, if sometimes heavy, expositions of calculus. Readers seeking a more serious, substantive amalgam of math and fiction might enjoy the math-based murder mysteries The Parrot’s Theorem, by Denis Guedj (2000), and The Oxford Murders, by Guillermo Martínez (2005), and the fictionalized biographies The French Mathematician, by Tom Petsinis (1997), and The Indian Clerk, by David Leavitt (2007).

Amazingly, Adams’s is not the only guide to using math to ride out a zombie attack. An earlier book by Jennifer Ouellette covers calculus with less intensive pedagogy but wider applications: The Calculus Diaries: How Math Can Help You Lose Weight, Win in Vegas, and Survive a Zombie Apocalypse (2010). Go figure.