A Corner of the World by Mylene Fernández-Pintado 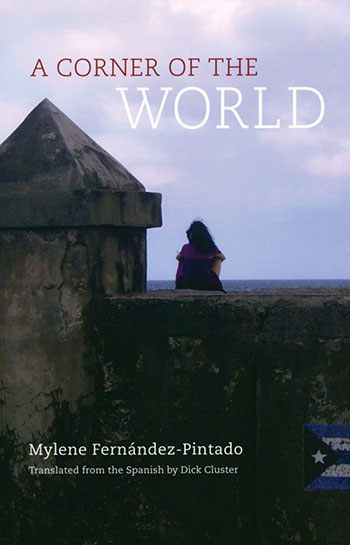 A Corner of the World is a love story with a sad ending. The ending is predictable from the beginning, expected as the protagonists are binary opposites with little in common other than physical lust. Marian is a thirty-seven-year-old university professor, and Daniel is a struggling, uneducated, twenty-two-year-old novelist. She is middle-aged, stuck in her rut, unable, unwilling, or too afraid to break out of it, and he is young, vibrant, adventurous, and raring to go anywhere, as long as the “where” is a new pasture. She is living in the past; he is moving toward his future. She teaches literature from a bygone peninsular perspective; he writes New World Cuban prose. In this love story, the question is inevitable: Could they have a future together? The answer can only be one thing: yes, if either or both can see their way to compromise on their individual stances. But neither can, nor appears to even want to, so it appears clear from the beginning that their ill-fated, fledgling affair is doomed to failure. Neither can bridge the age gap nor the disparities of their desires.

Set in a crumbling Havana, there is actually little sense of this being a Cuban love story, nor of its taking place anywhere in Latin America. The love story is so typical, so normal, so often seen or read about throughout history. Only the frequent mention of the Malecón and the “‘brand-new’ 1970 Moskvich [which] was a treasure on wheels” suggest Cuba to the reader. There is universality in the story: woman meets boy (after various earlier and disastrous love affairs), boy meets older woman (present girlfriend’s teacher), younger boy abandons older woman, leaves for Spain, older woman waits for young man. Months later young man returns, contacts older woman and arranges date, only to stand older woman up, which allows older woman to finally accept her loss and move on within her static, never-changing world.

So Marian fulfills the descriptor of her that Marcos, an on-again, off-again ex-lover has created: “You should have been a nun, Marian. Your resignation has always seemed to me like a preemptive rejection of anything good you could achieve in life. Losing before you start to play, accepting whatever comes.” And Marian fulfills the description her friend, Lorena, makes about herself: “Marian, there are people who simply fuse with the landscape that belongs to them. People who inhabit the scenes that tourists take a glance at, and who give them the advice they need. People who show up in the photos of others, and come to be part of the description of this place or that. I’m that kind of people.” And as Lorena is that kind of person, so is Marian: both of them entombed in their birthplace, part of the landscape, stuck in their own static world.

Although the book is an enjoyable read, the predictability of the plot becomes mundane as it winds its way through the myriad trials and tribulations toward a happy ending that cannot be.