To the Lake: A Balkan Journey of War and Peace by Kapka Kassabova 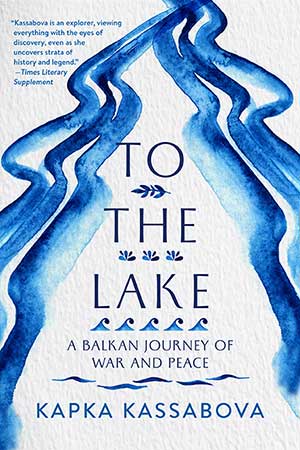 EURASIA'S MOST TUMULTUOUS chapters are preserved in the waters of two prehistoric lakes. In 2017 Kapka Kassabova’s Border examined the cultural conflux of Turkey, Greece, and Bulgaria along the latter’s southern border. Her ability to extrapolate historical context and modern implications through the people living and working along the eponymous divide gave the book an unparalleled spark of life. With her most recent outing, To the Lake, Kassabova shifts her focus to her childhood home of Ohrid, whose namesake, alongside the neighboring Lake Prespa, marks the crossroads of Albania, Greece, and North Macedonia. The changed setting yields a text that feels somehow more autobiographical without detracting from Kassabova’s exceptional characterization.

Ohrid and its adjacent lake, Prespa, serve as a thesis to one another. Where the former’s veneer is clearer, the latter’s history is marked by strife. What begins as a dive into the life of Kassabova’s grandmother becomes an exploration of the lakes’ symmetry. Serenity and familiarity flip on the edge of an invisible barrier that countless persons have lost their lives and freedom over. Kassabova is keen to point out that just behind the cafés, the bombarded ruins of the last century’s conflicts still linger.

A less involved text may run the risk of appearing clinical and detached. Conversely, too personal of a chronicle could sabotage its allure. Here, Kassabova strikes a balance, citing her own interactions with the figures she captures only to better frame them as people, whose lives will continue long after the author’s interaction with them ends. To the Lake summons the bulk of its power during these moments as Kassabova begs what is to become of community when its turmoil appears ceaseless.

Appropriately, the constant of both lakes is reflection. Even as the story’s pace quickens as Kassabova approaches St. Naum’s Monastery, contemplation is at the forefront, with the implication that though the effort to chronicle the region will be constant, the memory the lake already harbors is ancestral. Kassabova finds no amount of reappropriated borders or ideological clashes will change the fundamental functions of the lakes: to remain as they are.

Though it covers less literal terrain than its predecessor, Kassabova’s journey is more expansive. This, coupled with the raw candor of its many conversations, gives the book an undeniable pulse. Through its sincerity and profundity, To the Lake proves Kapka Kassabova’s to be one of Eurasia’s definitive literary voices.