Border: A Journey to the Edge of Europe by Kapka Kassabova 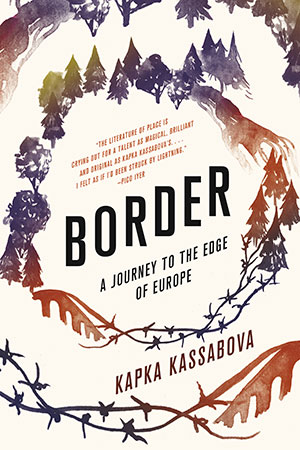 In the late 2000s, Kapka Kassabova undertook a trek along the southern border of her birthplace, Bulgaria. Through her journey, the author sought to examine and better understand the communities geographically transitional, unlabeled, and often unconsidered through their circumstances and day-to-day activity. What she ultimately discovers, however, is far less clinical. Border: A Journey to the Edge of Europe, an adventurous memoir derived from Kassabova’s travels, engages one with its premise, secures attention with its rich historical analysis, and ultimately resonates with its cathartic upheaval.

United across four movements, Kassabova curates and synthesizes the tales of those she meets, paying particular attention to their prejudices and perspectives. Her recollection does not discriminate, as Kassabova recalls intimate anecdotes of both sides of a swelling refugee crisis while building a frame of reference for the region as a whole. Early passages parallel those of Charles C. Mann in their attention to detail, though Kassabova’s proximity to her subjects yields a deeply personal tone impossible in the aforementioned historian’s texts. Weaving brief chapters of definition and context, the author prefaces her more substantial episodes with regularly scheduled intervals. Though this is often welcoming and provides an accessible platform for those unfamiliar with the region’s culture, it periodically comes at the cost of the narrative’s pace, especially in the novel’s third portion.

Border garners the majority of its staying power from its latter half, where the work narrows its focus even as it hones in on the individuals guiding Kassabova and the author herself. Here, she encounters Ziko, an aged but spry treasure hunter excavating and smuggling along the border of Greece and Bulgaria, and she meets Nevzat, a disco-dancing photographer whose subtle, “invisible” initial presence cascades into a vehicle for many of the novel’s more harrowing moments. In many of these conversations, Kassabova is the magnifying glass for cultural confrontation as her own considerations and fears are exemplified within a mountainous wilderness and integrated into her discourse.

Kassabova is unique, almost paradoxically so, in both her involvement and apparent objectivity. The author is obviously impacted by her travels; she never hesitates to convey her feelings provided it doesn’t hinder her a moment’s motion. However, she is also at times far less concerned with detailing her internal development, as in one significant chapter involving a former internment camp prisoner, which is presented almost as a transcription. These passages are well executed but could feel a bit tiring if it were not for Kassabova’s decision to ease back on secondhand tales near the text’s conclusion. Reading her conversations verbatim is necessary at times, but it becomes less of a priority as the writer’s reflections gradually turn further inward.

Border does not go out of its way to generate political dialogue, but this emphasis feels welcoming. Perhaps Kassabova’s greatest feat is eternalizing those on the border, emphasizing their plight and perseverance, and actively seeking to understand those forgotten.